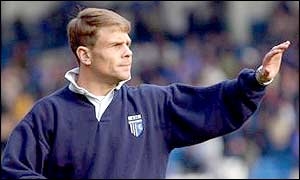 *BS*ANDY HESSENTHALER is tipping Lee Browning to be a success at Dover Athletic.

*BF*The striker is set to sign for Whites at the end of the week from Ryman One rivals Sittingbourne on a free transfer.

Boss Hess says his versatility up front and on the wings, as well as his ability to be comfortable on the ball, are key attributes which can only improve his promotion-challenging squad.

He said: “We’ve had Lee watched a number of times and keep getting great reports about him. The kid wants to come to us and I’m expecting a deal to be tied up by the end of the week.

“He can operate as an out-to-out striker, left winger and right winger. That gives us some options and more importantly, what impresses me most about him, is how comfortable he is on the football. That’s exactly the kind of players we want here.

“It’s another quality player we’re adding to the squad – and the competition for places is hoting up now. Everyone is being kept on their toes, and that’s exactly what any good side needs.”

Hess insists his team were guilty of lacking concentration during the 2-2 draw with Dulwich, as the unimpressive visitors fought back from a 2-0 half-time deficit to steal a point.

He said: “We made some very poor decision-making – and that’s ultimately what has cost us the points. There were many positives to take out of the game. Our attacking play was very good. We’ve just got to improve other areas of our game and I’m sure we’ll be doing well this season.

“In all honesty, I believe we’ve got the best team in this division and will prevail. We’re still unbeaten – it’s been a good start.

“We’ve got the likes of Clokey getting nearer to a return now. He should only be a couple of weeks away – and then it’s just a case of getting Alan Pouton back. We’ve got a good squad here.”

Hess has inevitably been linked with the vacant managerial position at Gillingham after Ronnie Jepson’s resignation – but the ex-Gills boss has ruled out a return.

He said: “I have every intention of honouring the two-year contract I signed to be Dover Athletic manager. I’m really enjoying the challenge of getting this club back up to where it should be and won’t be walking out on the club.

“It’s natural my name will be mentioned because I had 10 wonderful years at Gillingham and was their manager – but I am definitely not going to break my contract with Dover. That’s not the sort of person I am. No-one need worry about that.”