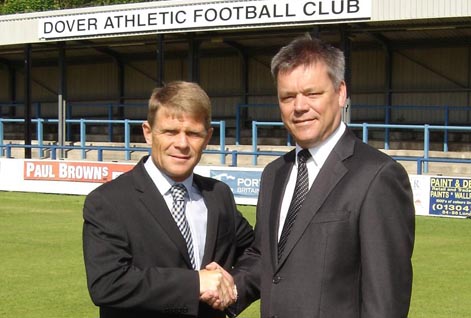 *BS*DOVER boss Andy Hessenthaler and his No2 Darren Hare have agreed to sign two-year extensions to their current deals, keeping them at Crabble until at least 2011.

*BF*The management duo have become an instant hit with the River End faithful, taking the club to a stunning Ryman League Division One South title triumph in their first season in charge.

Chairman Jim Parmenter said tonight: “I’m delighted Andy and Darren have signed new deals. This shows not only their commitment to this club but also our ambition to progress up the leagues.

“We mean business and are looking to challenge for honours again next season. We want to get back into the Conference.”

Andy will be issuing a retained list on Thursday – which will be published on doverathletic.com