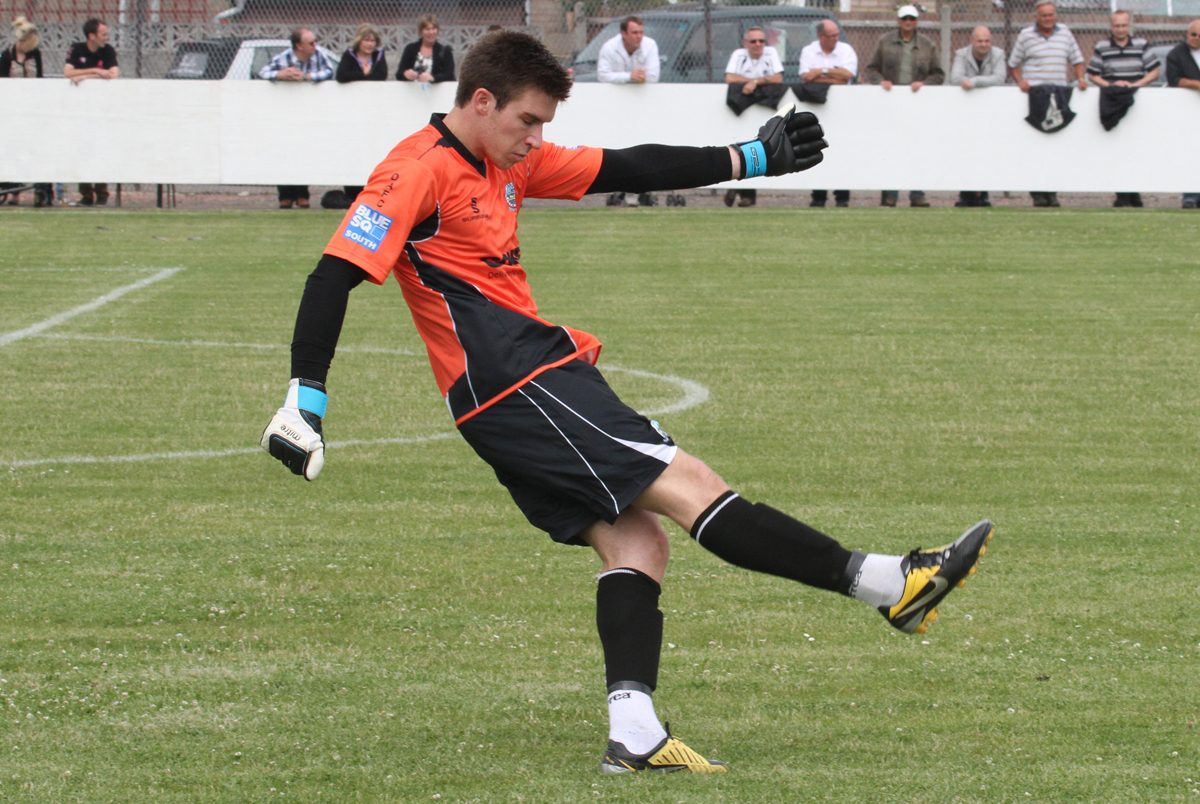 *BS*Dover’s number one speaks about his new contract, expectations for the season and his recent trip to Bermuda to represent the England C team.*BF*

Following a fine season between the sticks, Walker has decided to extend his Crabble stay for a further two years and was clearly glad his future had finally been sorted:

“I would have liked it to have been sorted earlier, but I had a busy summer playing for the England C! There were other offers, but it’s nice to play after training all week.

“I am still young and after these two years are up I will only be 23 and hopefully I can continue playing for another twenty years.”

Recent press quotes from Chris Kinnear expressed delight that the ex Brighton player has decided to stay and Walker was keen to return the compliment: “I enjoy working with him, we only lost once in the league under him last season and he has clearly brought something to the club. He told me he will be building a young, hungry team this season.”

With the league season just over six weeks away and training started, Walker revealed his plans: “I am going to train with Crawley this season where I can and help them out for things like shooting practice – it suits both parties. It really helps as well that they have a goalkeeping coach, even though Hooky tries to teach me!

*Ppic1*”As for the season ahead, I just want to be more consistent. Even though I have just had a good season, I made some mistakes last year and want to improve. I am my harshest critic.”

The tall stopper won the hearts of the Crabble faithful last season with some all action displays, including two penalty saves to send Dover into the play off final against eventual winners Salisbury.

After the disappointment of May’s final defeat in extra time, Mitchell is clearly looking to go one better next season: “It was really harsh on everyone connected with the club, but Dover is a well run with a good home crowd.

“I expect us to be challenging this season along with the likes of Eastleigh, Sutton, Chelmsford and Ebbsfleet.”

Wednesday’s fixture release sees Whites play three of the first four games against newly promoted teams Whitehawk, Gosport and Concord along with a juicy home game against Ebbsfleet sandwiched in between.

Mitchell is relishing playing against his old team mates, who followed Steve Brown up the A2 after his appointment by the new owners at Ebbsfleet: “I am looking forward to seeing them as they are all good lads and it certainly is the game the fans would have picked to see first. It won’t be strange to play against them as part of football is that players move on.”

Walker also gave his opinion on playing the newly promoted teams early on: “Every team can beat every team in this league and just because they have come from the league below, they are still going to be tough games. We will approach these games with caution as we do every game.”

Whereas most players will have visited exotic locations this summer to relax after another hard season, Mitchell Walker’s recent trip to Bermuda was for very different reasons after his call up to the England C squad for the first time.

Mitch said: “The standard was really good and it was a very professional set-up. I learnt so much from the manager and the goalkeeper coach and I hope the chance will pop up again. It was such an honour to play for my country and Bermuda was an amazing experience.”