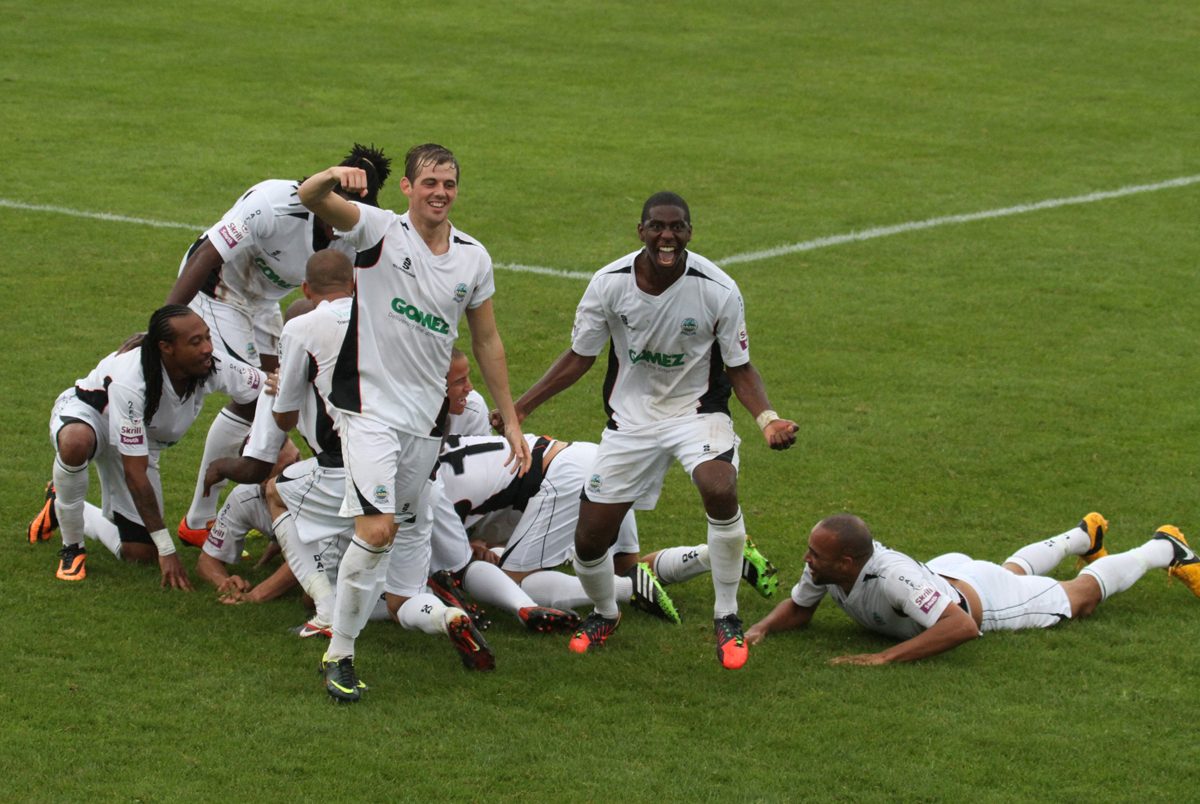 *BS*Defender Michael Kamara talks about the side’s start to the season, picking himself up from the play-off final against Salisbury and the togetherness in Whites’ squad.*BF*

The 24-year-old has been ever-present in the side ever since his move from Carshalton Athletic in March of this year, and is pleased with how this season has started: “Overall, we’re pleased – the win against Ebbsfleet was fantastic and it was good to pick up a hard-fought win at Whitehawk.

“Of course, we’re disappointed at losing to Concord – but I think that was just a bad day at the office. We’re not going to win every game, but it’s about how we react to the defeats and manage to win the following game – which we did on Bank Holiday Monday.”

Kamara was full of praise for goalkeeper Mitch Walker’s performance against the newly-promoted Sussex side: “Mitch was incredible, I told him after the game that he effectively won it for us. I’ve played with a lot of good ‘keepers in my career so far, but Mitch is definitely up there with the best and he’s just going to improve even further.”

The Greek-born defender was on the losing side in last season’s play-off final defeat at Salisbury, and admits it was difficult to pick himself up from this: “At the time, it was tough – we’d got so far, and battled hard against Eastleigh in the semi-final, and to lose in the play-off in the way we did was difficult. Chris and Jake were fantastic, though – they told us not to dwell on the loss and to make sure we came back even stronger next season. There’s a real sense of unfinished business within the squad.”

Six of the players who started against Salisbury have now left the club, but Kamara feels the club have done well to strengthen over the summer: “We’re much more of a team this season. It’s been a good start to the season but it’s still early days – after 10 games or so, we’ll be much more aware of each other’s ability and style of play and that’s when we should be strong. The performance against Ebbsfleet showed that we can perform in the big games.”

*Q1*Unity is clearly prevalent in this year’s squad, which Kamara is quick to attribute to the management: “There’s a great togetherness about us, which has been encouraged by Chris and Jake. Every single one of us is determined to achieve a lot at the club. It’s not just off the pitch, we’re told to take the team spirit we have and show it on the pitch too.

“Personally speaking, I think Welling (last season’s champions) had excellent team spirit – I don’t think they were the best footballing team in the league, but their unity probably won it for them.”

Kamara is grateful to his old employers and the part they had to play in his move to Crabble: “I was under contract at Carshalton at the time. I heard Chris was interested in me but wasn’t sure anything would come of it due to my contract situation. However, I spoke to my chairman at Carshalton and explained the opportunity being offered to me, and he agreed to release me from my contract, which I’m grateful for – and I’ve got no regrets.

“I’ve played at this level before, for Staines, Boreham Wood and Woking, but Dover is the best non-league club I’ve been at. Everyone – from the chairman to the manager, and my team-mates – is so professional and the set-up is great. I’m always so excited to train and play.”

Speaking about the club’s supporters, Kamara feels like they will play a huge part in any success this season: “The atmosphere at Salisbury was great, but bettered against Ebbsfleet – wow, what a game to play in. They never stopped making noise throughout the game and I could hear them so clearly on the pitch – they’re our twelfth man and the support, both home and away, is incredible.”