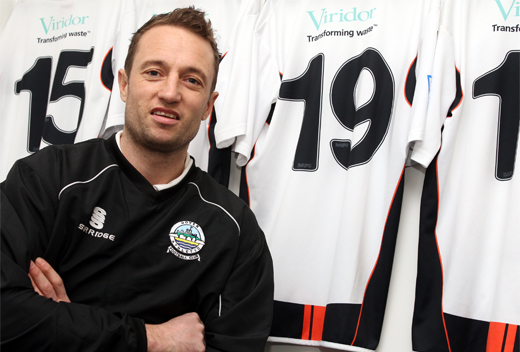 *BS*Jake Leberl speaks candidly about his new role at Crabble following Chris Kinnear’s appointment as Manager and their first meeting with the players.*BF*

Jake, who had two spells at Crabble as a player, was delighted to be back at his hometown club: “Even after I left, I always followed Dover closely. I know everything about the club.

“We want to make Crabble a happier place than it has been recently. We want everyone to enjoy themselves and, most importantly, we want the team to win games. I remember everyone used to be together – fans, staff and players – and we need to get back to that atmosphere.”

Having met with the players for the first time, Chris Kinnear’s right hand man was optimistic about the task ahead: “We discussed our approach to fitness and the importance of playing for each other. Everyone was in good spirits and I would like to think the players will buy into what we are trying to do.

“Let’s be honest, we are 3rd in the league and having watched the highlights, the players are clearly talented. We will give everyone a clean slate providing they want to give us a clean slate too.”

With Saturday’s game away to Maidenhead only a few days away, Jake admits to feeling butterflies in the stomach: “Myself and Chris are looking forward to the game, even though we are going into the match a little blind, but we have a good idea from the highlights as to what the starting XI will be. We will be looking to stop the rot at the first attempt.”

*Q1*Leberl was quick to pay tribute to the new man at the helm, Chris Kinnear, whom he also assisted at Margate: “I am 100% confident Chris will get the decisions right and he is still extremely ambitious.

“He makes the environment really good to work in and listens to everything I have to say. We always bounce ideas off each other.”

The apprentice is clearly grateful for the amount of knowledge his teacher has already passed down to him: “I always thought I was a good judge of player until I worked with Chris, then I realised I wasn’t as good as I thought!

“Nothing will phase him and Chris is very good at dealing with all different types of players. He is certainly not the type to throw tea cups around the dressing room and if the players respect Chris and work hard for him, form will pick up.”

Before teaming up with Kinnear at Margate, having previously played under him for the same club, Jake has already gathered some valuable coaching experience: “From a young age I knew I wanted to stay in football. I did some coaching at Faversham when Clive Walker and Bill Williams were there. Soon after I left, Chris rang me out of the blue asking me to go to Margate.”

Though Jake does harbour personal ambitions to manage, he admits to not yet being at the level he wants to be: “I am not 100% ready but I do want to manage in the future. I am happy to stay and learn under Chris’ wing for as long as he will have me.”

Though little time has been spent with the squad thus far and preparation has been hampered by poor weather conditions, Jake has been quick to spot some potential improvements that can be made to the squad.

He said: “There appears to be an imbalance with certain positions well covered, but other specialist positions not so. When you have a large squad, those players left in the stand secretly want to be playing which can cause a problem.”

*Lpic1*He was also quick to point out the importance of fitness, in particular at the second highest level in non league: “All the players need to be able to perform to their best for the full 90 minutes and perhaps some of the lads are not fit enough to break down teams that will come to Crabble and put all their men behind the ball.

“Some of the players here are super fit and we will make sure the rest get to that level too. We will also be working on pattern and shape, so players will need to get out and do extra fitness work. Players that are ambitious and want to do well always tend to do more.”

On the subject of training, Jake added: “It is something we are looking at to ensure players have eaten and are in bed by a reasonable time to ensure they are rested enough before the next game.”

Jake also touched on the subject of youth players: “I was lucky enough to have been given my chance of first team football at 19, but the problem with young players is that they do make mistakes, like I used to until Bill Williams stopped me!

“It is good there are youngsters in the squad, but they need to make the starting eleven based on merit. Myself and Chris will need to make sure the first team is right before we look at the Academy.”

Jake, who hails from South London and lives with his wife and children, still works in Dover for Electrical firm, EW Gee, as a project manager, who in turn are one of the current Dover Athletic sponsors.