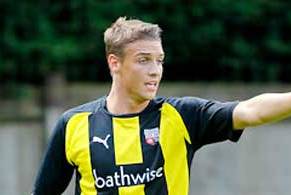 *BS*Liam Bellamy speaks to doverathletic.com about what lured him to Crabble and gives fans an insight as to what they can expect from him this season.*BF*

Bellamy, who lives in Wanstead East London, was clearly looking forward to the prospect of lining up for Athletic this season:

“I’m really excited. I did my research beforehand and spoke to Nathan Elder and Craig Stone, and when I spoke to the manager, he really sold the club to me.”

He added: “Dover are an ambitious club and we will be in contention this season. After meeting Chris I believe he will help me develop as a player and fulfill my ambitions.”

Unknown to most Dover fans and yet to experience playing at Crabble on arguably one of the best pitches in non league, midfielder Bellamy described his fledgling career so far: “I was a picked up late by the Charlton academy when I was 14 and I had a couple of loan spells in non league when I was 17 or 18.

“After I was released, Brentford offered me a two year contract but I was playing in the development squad most of the time and I went to Ebbsfleet on loan to get some more experience in men’s football. I then signed for Ebbsfleet permanently last season and played over 50 times for them.”

*Q1*With the start of pre-season imminent and the first friendly in one week’s time, Dover’s new central midfielder put into words what fans can expect from him on the pitch: “I like to get the ball down and play football and I am box to box. I prefer to be in the centre, but I can play on the left or right too.

Should Liam play in central midfield, he could play alongside fellow Ebbsfleet arrival Craig Stone: “I’ve only ever seen him play at right back but I know he can play in the holding midfield role and he is a quality player. If we do play together we could form a really good partnership.”

Even though he has dropped down from full-time football into the semi professional game, Bellamy made it clear where his priorities lie career wise: “I’ve always been in full-time football and I want to get back into the League and have a career in the game. My best friend Carl Jenkinson has played Conference South football and is now in the Premier League with Arsenal, so he has shown it can be done and it gives me that fighting spirit.”

With players on the non-league scene supplementing their playing income with another job, Dover’s young midfielder has already taken steps in that direction: “I have just completed a course in personal training and though my priority is still football, it will help me with my fitness!”