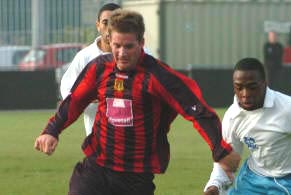 *BS*ANDY HESSENTHALER is delighted to announce the signing of prolific striker Mark Lovell from Sittingbourne.*BF*

The former Gillingham player met with Hess on Thursday afternoon and after a night reflecting has opted to join Whites.

Top-scorer at Bourne Park with 16 goals last season, where his father Steve is manager, Mark boosts Whites’ forward line to four strikers for the coming season.

Hess said: “Mark’s another quality front player. I know him very well from his time at Gillingham and obviously know his dad Steve Lovell.

“In fact, he reminds me a bit of when Steve played. He scored goals in a side which struggled last season – and we’ll be hoping to get a good return from him.

“We might play three strikers in some games next season I believe Jimmy Dryden, Frannie Collin and Mark have a lot of goals in them.”

Hess is now taking a one-week break before pre-season training starts – but said he was still hoping to do some more business while sitting in the Spanish sunshine.

Chairman Jim Parmenter and the Whites player-boss will remain in contact with each other – with a deal hopefully being set up for another quality addition to the squad.