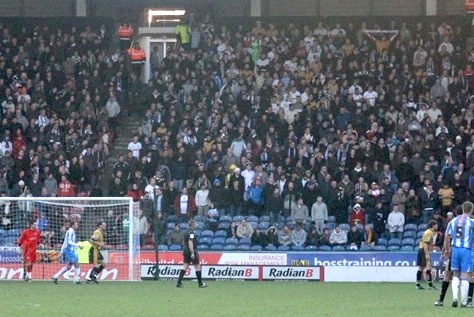 IT is with regret we announce the death of lifelong fan Mick Carter.

Mick lost his fight against cancer last week after a brave battle. He was 68.

His funeral will take place on Wednesday 30 March at 10.40am at Barham. Donations go to Pilgrims Hospice.

Dover Athletic stalwart Mick supported the Whites for the best part of 40 years and was a former chairman of the supporters club.

Mick tirelessly gave so much of his time to the club – either organising events, painting the gates at Crabble or selling golden goal tickets.

He epitomises what being a true non-league supporter is all about.

Supporters club chairman Paul Harrison said: “This is very sad news. Mick was a true gentleman and a pleasure to know. In the 10 years I’ve known Mick, he has always had a big smile on his face and we used to often have a chat with him and his wife.

“Many people will know Mick from selling raffle tickets from his disability buggy next to the turnstiles. He was a gentleman.”

Dover Athletic would like to pass on sincere sympathies from everyone connected with this football club, who hold Mick in the very highest esteem.