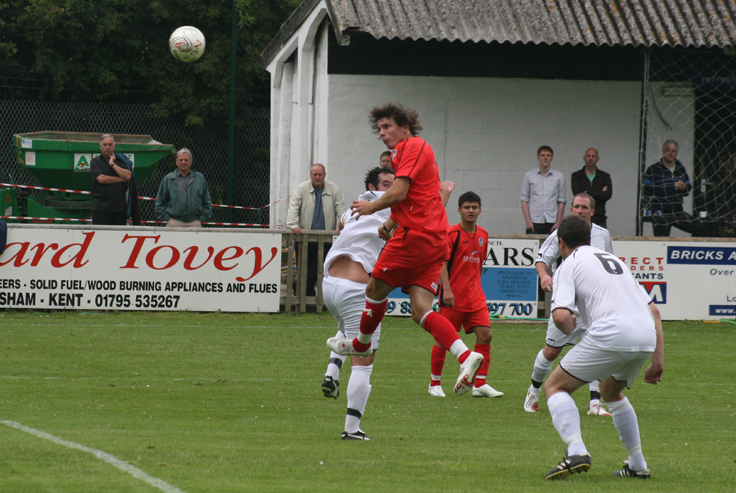 Whites will play their 2nd pre-season friendly at the Kent League champions, who will feature a number of familiar faces to Dover supporters.

Meanwhile, Martin Hayes is hoping to complete the signings of several new players in the coming week to bolster his first-team squad.

A welcome addition on Saturday will be central defender Rob Gillman, a new signing from Bromley. Rob was unavailable for the first match due to a family wedding.

Assistant manager at Salters Lane is Clive Walker, who will need no introduction to Whites’ supporters. He helped boss Justin Luchford in guiding the club to promotion from the Kent League last season.

Leaving the club in the summer was Lee Shearer (pictured above – no.6). Shears enjoyed two spells at Crabble and has since played for several Kent clubs, including Folkestone and Maidstone. He has now signed for Hythe Town.

*BS*Recent History*BF*
Faversham Town reached a crisis point in 2003 when the club were ejected from the Kent League for non-payment of fines. With the ground effectively abandoned the vandals and drug-dealers moved in and systematically destroyed what was left.

The club trustees fought a desperate battle to heal the rift between the then owners over ownership of the Club and the Salters Lane ground. The issues were eventually resolved and the club returned to the Kent League in 2006.