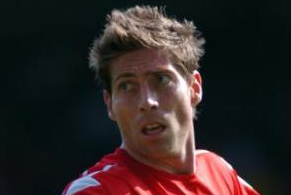 *BS*ANDY HESSENTHALER is thrilled to have signed Gillingham midfielder Nicky Southall on loan for a month.

*BF*The midfielder, who can also play in defence, joins from Gillingham where he played with and under Whites manager Hessenthaler.

Gillingham have given permission for Southall to play in the FA Cup against Tonbridge Angels, next Saturday and goes straight into the squad for tonight’s game against Hendon.

Boss Hessenthaler said: “No disrespect to this league, Nicky is a class above – and I’m staggered we’ve got him here.

“He had no hesitation joining us because he likes the football we’re playing and the direction we’re heading in.

“The lad played in the Premier League for Bolton and has been at Nottingham Forest, not to mention when I managed him in the Championship at Gillingham.

“Young lads in our team, such as Matt Fish, Dean Hill, will learn a lot from Nicky – the way he trains, the way he plays and what he brings to the team.

“It’s only a month but you never know what may happen in the future in football. But we’re thrilled he’s down here.”

He said: “The chairman has made it happen. We’d like to thank Gillingham – they’re paying most of his wages as we’d never be able to afford him otherwise.”

Nicky told BBC Radio Kent: “I didn’t want to travel any distance for family reasons. I had a bad time when I was at Bolton when I was sent to Norwich on loan and was away from my family for three months.”

“Of course I want to play for Gillingham again. I want to come here to Dover and get my fitness back and hopefully I’ll get to run out in front of the Priestfield fans again.”