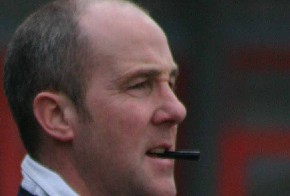 *BS*THE lads have been back in training for just over a week now – and we have had four superb training sessions.

*BF*Everyone is bouncing about, full of beans, and eager to put right the bitter disappointment of losing the play-off final at Tonbridge.

Make no mistake, we all felt the hurt of that defeat. I could not talk to anyone for two days afterwards.

The trouble is, when you suffer the disappointment of losing a game like that with so much at stake at the end of the season, you have to carry that hurt through the entire summer.

When you lose a game in the season, you have another game not long after to get it out of your system.

It was a bitter pill to swallow, especially after that great run we had at the end of the season. We did really well in the opening dozen games and the last dozen games – but we just were not at the races in the middle half of the season.

Now we have to make sure that does not happen again. We have to take that on the chin and make sure at the end of the coming season we do not have to go through the play-off lottery again.

*Q1*John Keister joining the club is going to be such a big boost. Had we a player of his magnitude during that sticky run last season, I believe we would have gone up. He has that experience of how to win matches.

We are hopeful that Chris Chase is going to sign a contract and play for us this season, too. When he joined us last season, it coincided with an upturn in form. Not only did he provide us with some pace up front, he also took the pressure of “Wilko” (Craig Wilkins), who at that time, by his own admission, had lost his form in front of goal.

“Chasey” is such a lively character and he has been at all our training sessions so far – and is coming down this weekend too. He lives up in the Watford area so, for him to be travelling down for training when he could easily do that nearer his home, gives a good indication of his feelings for Dover Athletic.

He told me that he enjoyed himself down here last season and likes all the lads here. Hopefully, he will stay and, along with Keister, we have two players that can make a big difference to our chances of promotion.

The energy in training has been above expectations – and the younger lads have all settled in well. It was important to get younger legs into the side to play around the older heads and, in Byron Walker, Bradley Spice and Matt Bourne, we have that. And, if Chasey puts pen to paper, suddenly things look very good.

*Lpic1*Dean Readings has been heavily involved in all the training sessions – and the lad has been working his socks off away from the training ground in his own time too.

His attitude has been first class. The work he has put in during the summer months has put him in good stead – and although he won’t be playing in our opening friendly on Tuesday against Gravesend he is not going to be too far away, fingers crossed.

Jimmy Dryden is being wrapped in cotton wool at the moment. We do not want to take any unnecessary chances. He is undertaking rehab and we just want him to get right before throwing him into anything. So far, he is making excellent progress.

Clive Walker returns in a week from the States. In the meantime, we take on Gravesend, who have already started their pre-season campaign. Obviously, they are a Conference side that train full-time, so I expect them to be some distance ahead of us in terms of fitness.

It will be a good workout for our lads and at this stage results are not of any importance. It is a case of trying to give everyone a runout and we will not be really working on a pattern of play until the later friendlies.

Now we just want to crack on and prepare ourselves as best we can so we can get off to another good start to the league campaign – and, hopefully, this time maintain it right through the season.