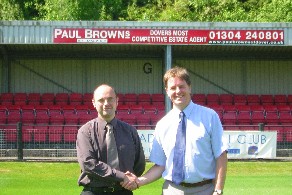 *BF*Paul, who owns the friendly and professional local estate agent Paul Brown’s, has been a long-term friend and, along with his father Peter, a generous investor in Dover Athletic.

His business is only two years old and already he has built up a reputation for being the town’s most competitive estate agent.

Paul said: “I am delighted to get this opportunity to sponsor Dover Athletic. We are a growing business, just like Dover Athletic are now a growing football club, and want to be part of building this club back up.

“We’ve initially agreed a one-year deal with Dover Athletic but it’s our intention to get more involved with the football club. We see it as a focal point of the community and want to do all we can to help it progress.

“I really enjoyed last season. We came up and sponsored a few games – and now we cannot wait for the new season to start. We’re excited about the team’s chances of being successful.”

The new kit will be officially unveiled before the home match with Hinckley United on Saturday.

Club vice-chairman Roger Knight said: “We’re very grateful to Paul for stepping in. He’s a great supporter of our club and we look forward to a long and successful partnership with Paul and his business.

“The new kit design has received Paul’s seal of approval.”

Paul added: “I can’t wait to see the new kit on Saturday. I hope everyone likes it.”