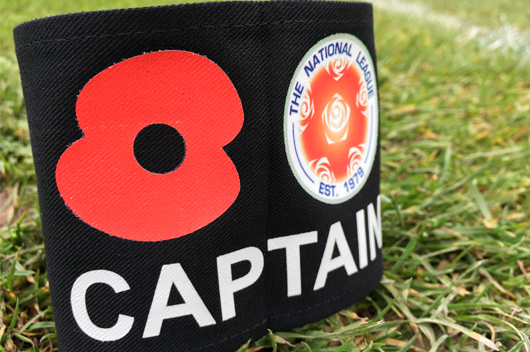 *BS*The National League is combining forces with The Royal British Legion over the forthcoming weeks to raise the awareness of their annual Poppy Appeal and how those financial contributions aid the sterling work done to support members of our armed forces who need care in our communities at this time.*BF*

All 68 National League clubs will be working in unison with their local branch of The Royal British Legion to oversee collections are held at each club and this will be supplemented through a unique partnership, whereby a specially produced ‘captains armband’ will be worn by each respective club captain at all matches to be played in The National League on Saturday 14th November.

Each armband will then be available for auction by the respective member club and it is hoped across the whole of The National League an additional £10,000 can be raised to supplement those amounts raised via ground collections and any other individual local arrangements around Remembrance Day.

Brian Barwick, Chairman of The National League remarked, “Each and every one of our member clubs already work within their communities in many varied ways, so we see this partnership as an extension of supplementing the sterling work many do. Raising awareness of the work undertaken by The Royal British Legion alongside the Poppy Appeal will enable more funding to be made available for those who have served their country and need our help. In 2015 we have sadly been reminded only too graphically of the dangers our service personnel face, so we are pleased to be able to work together to enhance the awareness of the Poppy Appeal. May I thank everyone taking part in this initiative for their valued contribution and we look forward to the auction of the ‘captains armbands’ raising even more needed extra funds”.

In response to his comments, Claire Rowcliffe, Head of Regional Fundraising with The Royal British Legion stated. “Having the support of The National League for this year’s Poppy Appeal means a lot. Funds raised will help us to continue providing vital support to serving individuals, those who are moving on or have moved back to civilian life, and importantly their families too.”

*BS*Further details about our auction will be communicated next week.*BF*