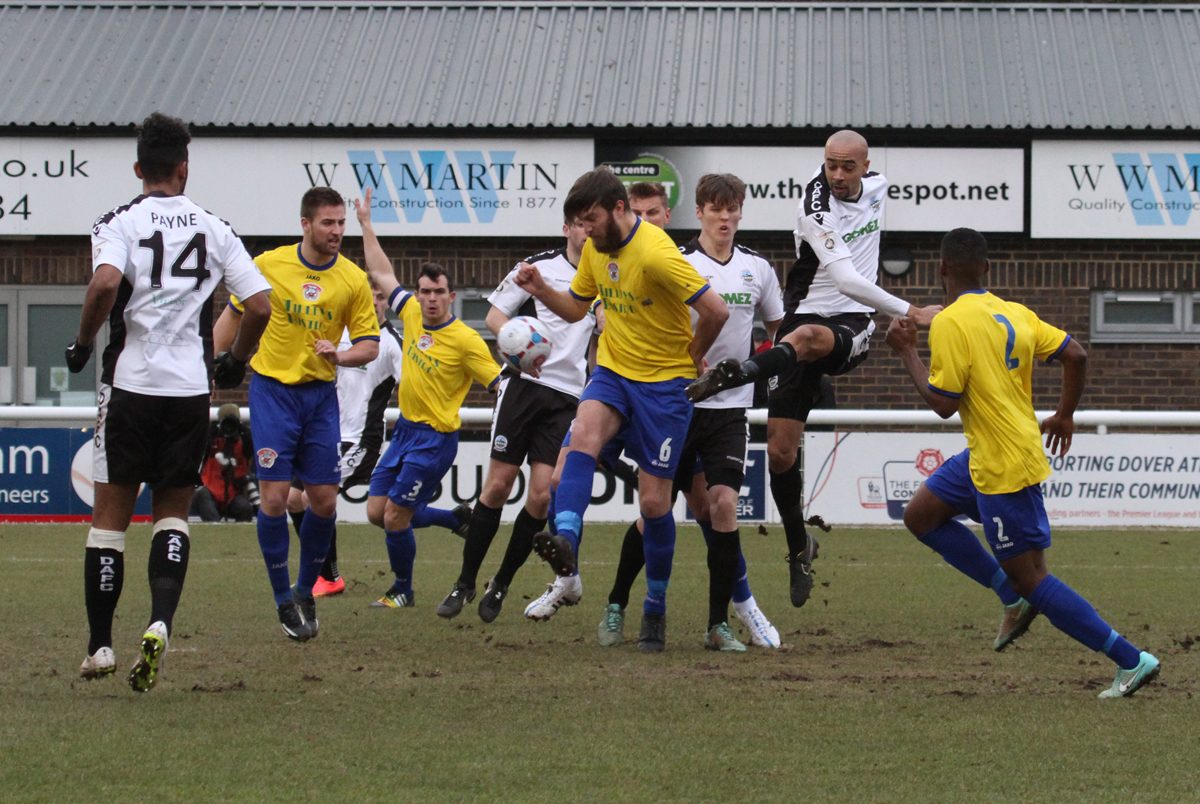 *BS*Dover Athletic attempt to make the FA Trophy semi-final for the first time in 17 years as they travel to Bath City on Tuesday night after *Link1*.*BF*

Whites came from 1-3 down with four minutes to play when firstly Richard Orlu, then Jake Reid with just his third goal of the season headed home to snatch a dramatic draw to force a replay at Twerton Park.

Either Dover or Bath will face Vanarama Conference Confere club North Ferriby United, who defeated rivals Ebbsfleet 1-0 in the quarter-final.

*Lpic1**BS*Team News for Dover*BF*
Midfielder Solomon Taiwo is a doubt on Tuesday after he pulled up with a suspected hamstring injury in the warm up last Saturday
Chris Kinnear Junior replaced him last Saturday, and will be hopeful of keeping his place again in the replay.

Top scorer Stefan Payne will start the first of a three match suspension after his red card for violent conduct against Bath.

Last Saturday’s hero Jake Reid could start in place of Payne, with James Poole the other like for like option available to Chris Kinnear.

Midfielder Liam Bellamy is definitely unavailable for Dover due to a hand injury picked up against Woking on 24 January, whilst midfielder Adam Mekki and striker Dan Holman – both yet to make a first team appearance for the club – are cup-tied having already featured in this season’s competition for Barnet and Aldershot Town.

*BS*Team news for Bath*BF*
Naby Diallo also saw red in the dying seconds of last Saturdays dramatic draw, but due to the differing suspension rules in the FA Trophy for Conference Premier and Conference South clubs, does not begin his suspension until Saturday and thus will be available for tonight’s game.

Striker Ross Stearn was a second half substitute and scored the Romans third goal and will be pushing for a place in the starting XI.

*Lpic2**BS*Opposition form*BF*
Lee Howells’ Bath City side currently sit 12th in the Vanarama Conference South, but have games in hand over the teams above them due to their FA Trophy cup run.

Bath, also known as the Romans, have been in decent form ahead of the game against Dover, having lost just once in their last seven games. In that run, Bath defeated table toppers Boreham Wood, however lost to 2-1 Whitehawk last Tuesday.

Bath have one of the best defences in the Conference south, having conceded just 29 goals to date. Only Ebbsfleet and Gosport have conceded less.

*BS*Match information*BF*
Manager Howells was named Vanarama Conference South manager of the month for January thanks to a great cup run and steady league form.

The last time Dover won an FA Trophy quarter final was in 1998 beating Barrow on penalties. If the teams cannot be separated after 90 minutes, extra time and penalties will come into play.