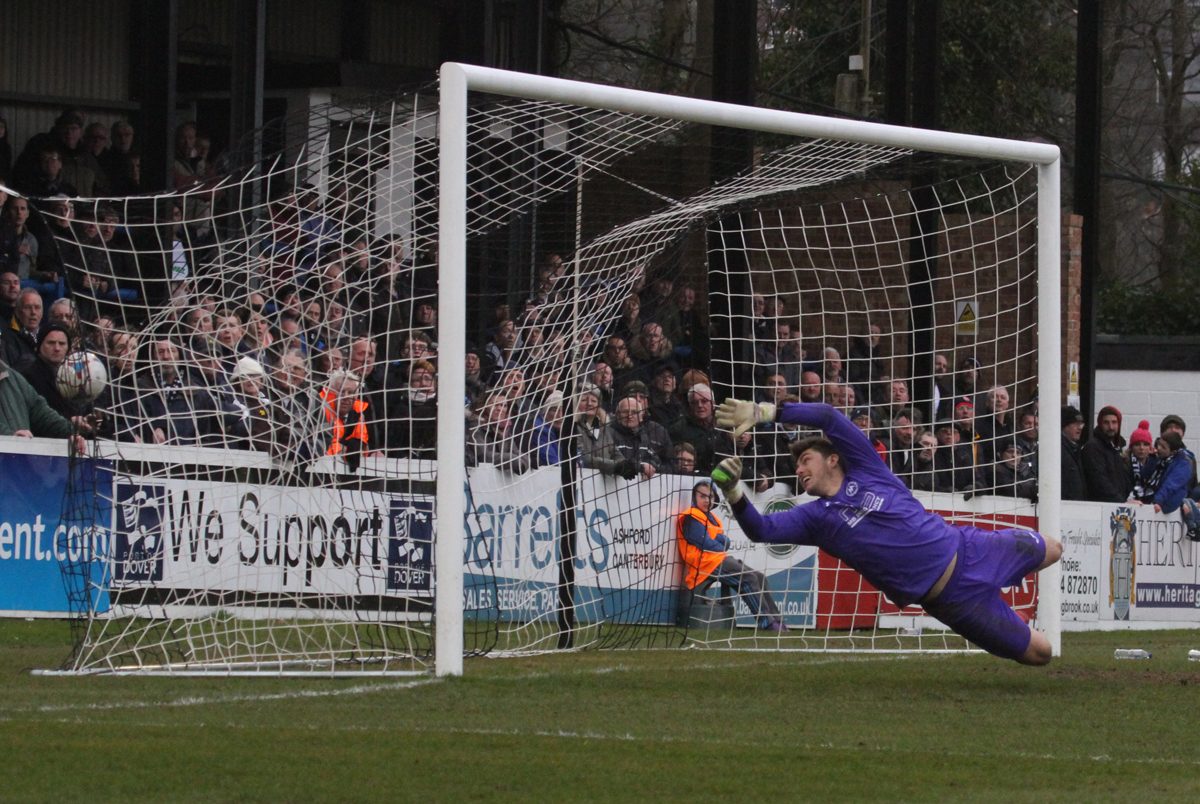 *BS*HEADLINES*BF*
Eight matches to go. Eight matches for Dover Athletic to achieve what nobody outside of the club thought was possible at the start of the season – sealing a playoff spot. Whilst many ex-League clubs still have their eyes on a top five finish, Whites – along with Braintree Town – are in the driving seat.

Since the division implemented a 24-team format, in the 2006/07 season, a side reaching 81 points has always managed to secure a playoff spot. Whites currently sit on 68, meaning that thirteen from their final eight matches should be enough to make it into the end-of-season lottery. With tough ties still to come against sides including Wrexham, Grimsby Town and Forest Green Rovers, Whites will be hoping to add three points onto their tally with the Easter Monday trip to Boreham Wood.

A 5-0 thrashing of Torquay United – who had arrived at Crabble in red-hot form – marked Dover’s pedigree. To have five different names on the scoresheet was an added bonus, and – after struggling to keep clean sheets at the start of the season – keeping four shutouts in their last six matches has seen the defence tighten up at the perfect time.

Boreham Wood come into Monday’s game having had an extra day’s rest – their first Easter match took place on Friday, when they were defeated 4-1 at league leaders Boreham Wood.

Wood now sit in 22nd place in the Vanarama National League table – one point from safety, having played a game more than Altrincham, who are fifth from bottom. After Monday’s game, Whites host FC Halifax (19th) and Altrincham (20th) in their next two games.

The club was formed in 1948 by the amalgamation of two local sides, Boreham Rovers and Royal Retournez. In 1966, after playing in such leagues as the Mid-Herts League, Spartan League and Parthenon League, they joined the Athenian League, where two promotions took them to the top division, where they were champions in 1973–74. After this, the team joined the Isthmian League.

In 1977 they reached the Isthmian League Premier Division, and they were to bounce between the top two divisions on a number of occasions over the next 27 years. In 2004 a re-organisation of the pyramid saw them move to the Southern Football League Eastern Division, which they won in 2005–06, but further re-organisation in 2006 saw them promoted to the Isthmian League Premier Division rather than the Southern League’s equivalent.

In 2010 Boreham Wood won the Isthmian League Premier Division play off final to obtain promotion to the Conference South for the first time in their history. In the 2014–15 season, they managed to achieve a 2nd-place finish in the Conference South to be entered into the playoffs for promotion to the Conference Premier. In achieving a 2nd-place finish they set a new club record for their highest finish in the English football league system. In the play-off semi-final against Havant and Waterlooville, Wood won the first leg 2–0, followed by a 2–2 home draw to send them through to the play-off final versus Whitehawk, which they won in extra time, winning them promotion to the National League for the 2015–16 season.

*BS*RECENT FORM*BF*
Coming into the game, Whites have a record of five wins and one draw in their last six Vanarama National League matches. Wins were picked up against Woking (1-0), Welling United (2-1), Lincoln City (4-1), Guiseley (1-0) and Torquay United (5-0), with a draw against Tranmere Rovers (0-0).

Boreham Wood’s record over the same number of matches shows one win, two draws and three draws. The victory came against Southport (3-0), with draws against Barrow (0-0) and Macclesfield Town (0-0), and defeats suffered against Barrow (0-2), Wrexham (0-1) and Cheltenham Town (1-4).

*BS*HOME AND AWAY*BF*
Away from home this season, Dover have the seventh best record in the division, with eight wins and four draws accumulated from eighteen matches on their travels.

At home this season, Boreham Wood have the worst record in the division. They have won just three of their twenty matches at Meadow Park, and scored a league-low of just fourteen.

*BS*MEMORABLE MEETING*BF*
*IS*Saturday 30 August 2008
Ryman League Premier – Boreham Wood 2-3 Dover Athletic
Dover survived a late Boreham Wood comeback to take the three points home from Hertfordshire. Whites looked comfortable for the first 75 minutes, as the side went three goals ahead through a Shaun Welford strike and a brace from Frannie Collin. But although the team switched off slightly late on, conceding twice, Dover secured a fourth win of the season to take them up to second in the league.

It was a fantastic start for the Whites, as they took an early lead. With just two minutes played, Wallis’ corner was dummied at the near post by Hess, and Collin struck the ball goalwards. The shot was stopped by keeper Noel Imber, but Welford was on hand to fire the rebound into the net.

Midway through the half, Dover made them pay for the missed chances by doubling the lead. Collin won the ball off the right back, Mark Burgess, and cut-back for Wallis. He was brought down in the area by Wes Daly, and Frannie stepped up to coolly slot the penalty into the corner of the net for his first goal of the campaign – and you could see from his celebration what it meant to get off the mark for this season.

Early in the second half, it was 3-0. Collin and Wallis played a long-range one-two across the edge of the area, and from just inside the 18-yard box Frannie fired past Imber, with the aid of a slight deflection off of defender Danny Barber.

On 77 minutes, the home side gave themselves a lifeline. Schulz was adjudged to have fouled Lee Allinson in the box, and Archer stepped up to slot the penalty past Whitehouse and into the net. With a minute of normal time remaining, Boreham Wood found themselves with a chance of nicking a point. Allinson was left free on the edge of the area, and he slotted the ball into the net.

The two late goals were another lesson for the side that they cannot afford to switch off, but it shouldn’t take away from the fact that they looked much more ‘on-song’ at Meadow Park, and came away from a tough looking game with the win.*IF*

*BS*TEAM NEWS*BF*
Whites continue to be without Aswad Thomas, Andy Rafferty and Tyrone Sterling, and can be expected to name an unchanged line-up from the side seen on Saturday against Torquay United. That means a place on the substitutes bench is likely again for loanee Connor Essam, whilst Liam Bellamy may also need to settle for a place on the bench following his return from injury.

Boreham Wood’s top scorer in the league this season is Luke Howell, who has the found the back of the net five times.

*BS*COVERAGE*BF*
The best place to see Monday’s big game is at Meadow Park, but for supporters unable to make the game, our Live Text service on Twitter – @DAFCLiveText – will be running as usual.