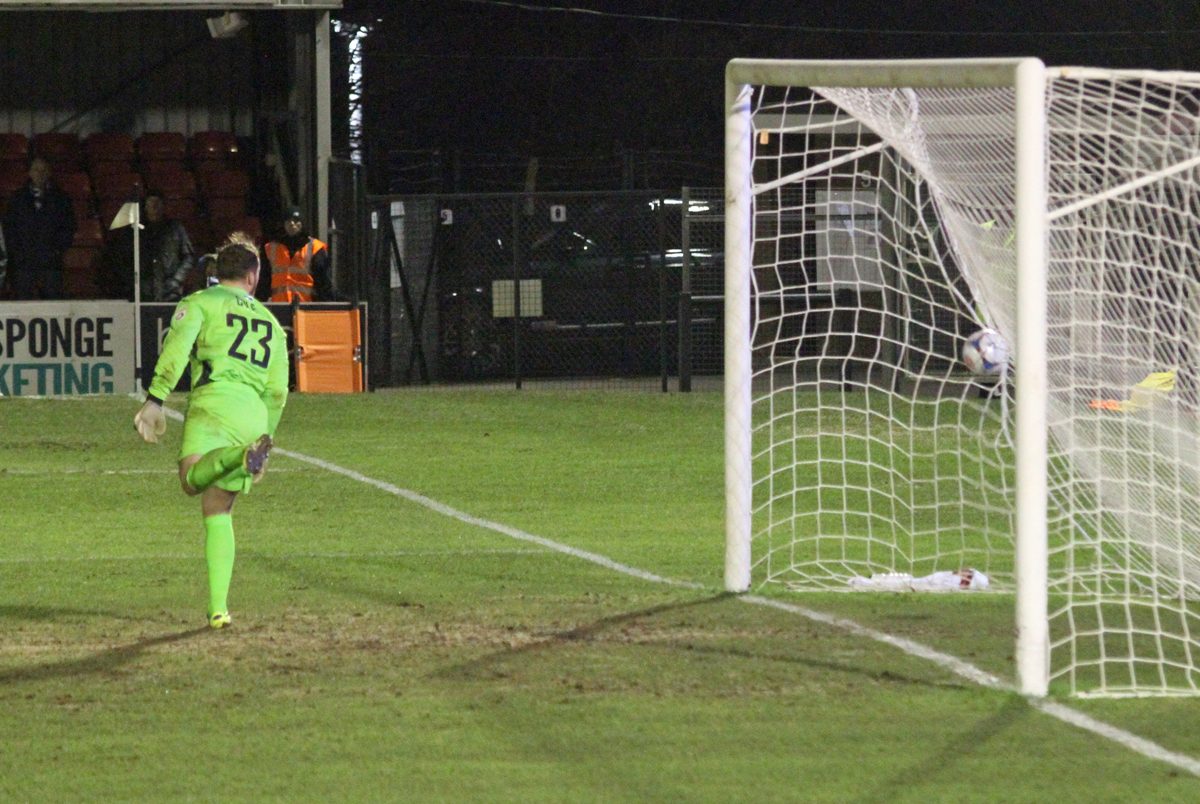 *BS*Dover Athletic look to progress in the FA Trophy as they host Vanarama Conference South side Bath City in the quarter-final stage.*BF*

Whites overcame a stubborn Woking side 1-0 in a Third Round replay thanks to Nicky Deverdics’ superb free kick. The side defeated Bath City 1-0 in the third qualifying round of the FA Trophy last season, as well as doing the double over them in the league.

*BS*DAFC TEAM NEWS*BF*
New signing Dan Holman is ineligible for Saturday’s game, having already played in the competition whilst on loan at Aldershot Town earlier on in the season. The striker has joined on loan from League one Colchester United until the end of the season, but will have to wait another week to make his first team debut.

Recent recruit James Poole was a late substitute against Lincoln last Saturday and is expected to be on the bench again. Poole scored two goals in six appearances during his loan spell earlier in the season, including a goal in the first round against Lowestoft.

Defender Sean Francis picked up a hamstring injury against Woking in the last round and is a doubt for Saturday’s game which means Tom Wynter could replace him. Midfielder Liam Bellamy remains on the side lines while he recovers from a fractured hand, therefore Solomon Taiwo is likely to keep his place in the centre of midfield.

Defenders Tyrone Sterling and Richard Orlu are expected to keep their places in the team, after the club recently announced they signed contract extensions keeping them at Crabble until the end of the 2015/2016 season.

New signing Adam Mekki is unavailable because he is cup tied having featured for Barnet earlier in the competition.

Bath, also known as the Romans, have been in decent form ahead of the game against Dover, having lost just once in their last six games. In that run, Bath defeated table toppers Boreham Wood, however lost to 2-1 Whitehawk last Tuesday.

Away from home, the Romans have struggled to find the net scoring a just 12 goals on their travels which is the worst record in the Vanarama Conference South.

*BS*BATH CITY’S ROUTE TO THIS ROUND*BF*
Bath needed extra time and a replay to see off Vanarama Conference North strugglers Gloucester City in the third qualifying round, eventually defeating them 3-1 thanks to two extra time goals.

In the first round proper, Bath picked up a memorable result defeating Conference high-flyers and local rivals Bristol Rovers 0-2 at Memorial Stadium. Two goals in three second half minutes was enough to cause a major upset in the competition.

Britton’s side then took on fellow Vanarama Conference South side Wealdstone and came away with a comfortable 1-3 victory. The Romans were then rewarded with a home tie as they took on Altrincham. A Phil Walsh goal 12 minutes from time was enough to give them the win as they claimed their second conference scalp in the competition.

This is just the second time in Bath’s history that they have reached the quarter-finals of the FA Trophy.

Chris Kinnear’s side will be favourites to make the semi-finals, however the Romans are not to be taken lightly having beaten two Vanarama Conference teams already in the competition.

*BS*MATCH INFORMATION*BF*
Dover Athletic are the highest ranked team definitely in the quarter finals, although Gateshead and Halifax – both of whom play third round ties on Saturday – are ranked higher in the league standings. Bath City are the second lowest ranked side left in.

If the game is tied after 90 minutes, a replay will be played at Twerton Park on Tuesday 10th February, with a 7.45pm kick-off. The winners of this quarter-final clash will receive £8000 in prize money and a place in the FA Trophy semi-finals – the draw for which will be made live on TalkSPORT on Monday morning at 11.30am.

Fans who are unable to attend this big FA Trophy clash can follow the game via @DAFCLiveText on Twitter.

*BS*OTHER FA TROPHY FIXTURES:*BF*
Third round replays:
*IS*Gateshead v Wrexham
FC Halifax v Dartford*IF*
(Winners of the above fixtures to play each other in a quarter-final at later date)