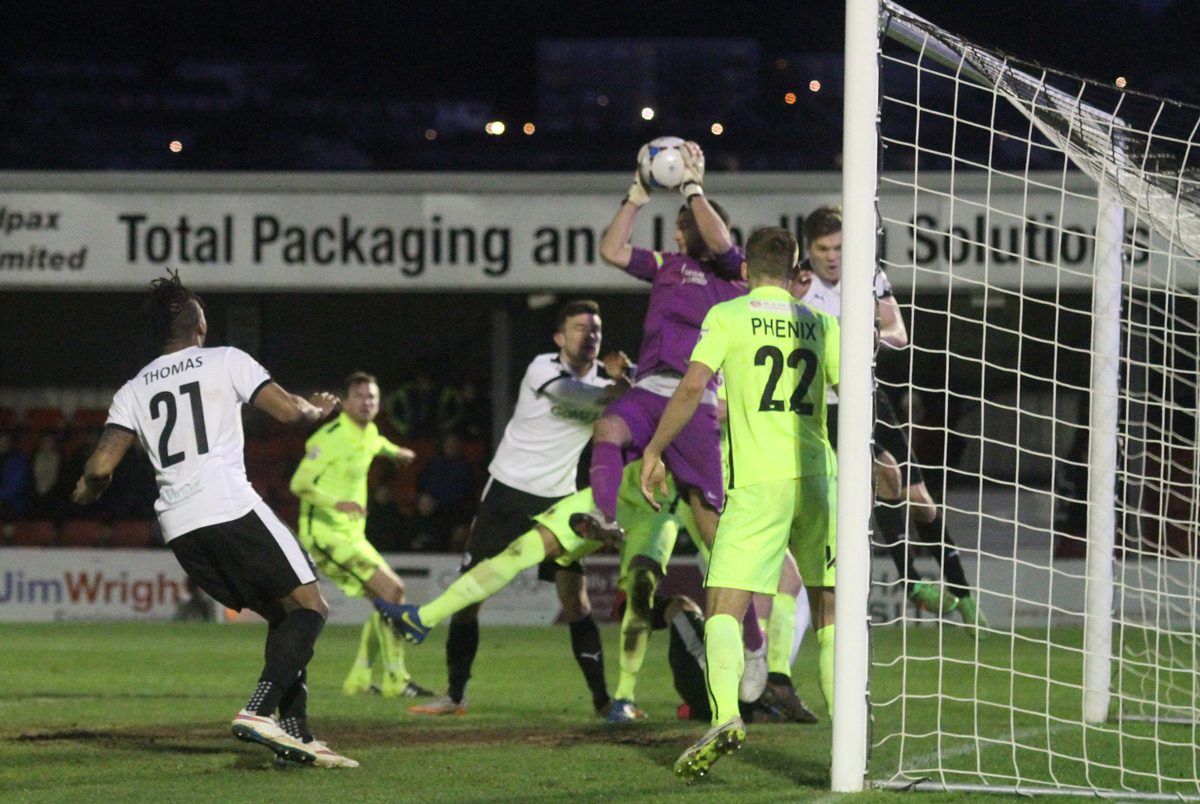 *BS*HEADLINES*BF*
Having suffered a 2-1 defeat to Nantwich Town in the quarter-final stage of the FA Trophy on Saturday, Whites’ potential routes to Wembley have been halved. The last remaining opportunity for a trip to the national stadium will be through the playoffs, and Tuesday’s Vanarama National League match against Southport provides a perfect chance for the side to put Saturday’s disappointment behind them.

With just fifteen matches remaining in this league campaign, Whites are in a strong position. The side sit three places, and four points, behind fifth-placed Wrexham but have five games in hand over the Welsh side. Indeed, Chris Kinnear’s men have played less games than every other side in the division, except for lowly Torquay United, meaning that the chance to break into that top-five is in their own hands.

When they appointed Dino Maamria as their manager, Southport went on an impressive run of form – but that has since dried up. They are now winless in seven Vanarama National League matches, and there is now just six points between them and the dreaded drop zone. As such, Tuesday’s match holds great significance for both sides – for very different reasons.

A win for Dover would see them climb at least one place, potentially two – depending on how Braintree Town get on against Kidderminster Harriers – whilst at least a point for Southport would see them rise one place, into 15th spot.

In the 2010/11 season, Southport finished in the relegation zone of the Conference National, but were handed a reprieve after Rushden & Diamonds were expelled from the league.

They turned their fortunes around in the 2011/12 season, finishing in seventh place – their highest league finish in a decade – and narrowly missed out on a playoff spot. They failed to emulate this performance the following season, finishing fifth from bottom, which saw manager Liam Watson leave the club.

In May 2013, Alan Wright was appointed manager, but his tenure last for just seven months after a string of poor performances. His replacement was John Coleman, who had played for Southport over 25 years earlier, and had previously managed Accrington Stanley. Under Coleman, Southport escaped relegation – but much to the dismay of supporters, he was not kept on a boss.

In came Martin Foyle, formerly of Hereford United. A number of first team players left the club, leaving Foyle with a big rebuilding job. He struggled, and was dismissed in October 2014 and replaced by Gary Brabin. Despite an impressive FA Cup run, ending in a third round defeat to Derby County, Brabin’s spell was short-lived, as he accepted a role within the Academy setup of Premier League side Everton.

Paul Carden, who had worked as Brabin’s assistant, was promoted to the position of manager and guided the club to survival yet again in the 2014/15 season, finishing 19th in the league.

Carden’s team started the 2015–16 season in poor form, leading to his departure from the club in November 2015. Dino Maamria became Southport’s seventh manager since April 2013 shortly after.

*BS*HOME AND AWAY*BF*
At home this season, Dover have the fifth best home record in the division, with nine wins and three draws from fifteen Vanarama National League matches at Crabble.

Away from home, Southport have the fifteenth best away record in the division, with five wins and five draws from their seventeen matches on the road in the league.

Highlights of our 2-2 draw at Crabble in the league last season can be seen here:

Manager Bill Williams, still without the services of Stuart Munday and Neil Le Bihan, named the same side that defeated Forest Green Rovers. Southport started well, their players obviously looking to impress caretaker boss Paul Lodge. After 18 minutes they had the ball in the back of the net when Ian Arnold set-up Lee Elam, but the goal was disallowed for offside.

The Merseysiders continued to press but as many other teams have found this season Dover are a very dangerous side on the break. Dave Clarke, showing the form that prompted John Owens to select him for the England Semi-Pro trials, chipped the ball over Neil Grayston, where Whites’ other England trialist, Simon Wormull, collected the ball and centred for Steve Norman to drive home his first goal for the club from 10 yards on 37 minutes.

Just three minutes later, Wormull was again involved. This time his centre eluded Southport keeper Steve Dickinson and Joff Vansittart headed in from close range, his eighth goal of the season. Athletic led 2-0 at the interval.

Southport had significantly more attempts on goal than Dover and were rewarded for the persistence seven minutes from time. Dominic Morley lobbed the ball to the back post and Mark Stuart looped a header over Paul Hyde to give his side some faint hope.*IF*

*BS*TEAM NEWS*BF*
January signings Tyrone Marsh and Harry Crawford, previously ineligible for the FA Trophy, are now available for the remainder of the season. Manager Chris Kinnear is likely to keep the faith with the XI that began the defeat at Nantwich at the weekend, but both Marsh and Crawford will be hopeful of being named on – and used from – the bench.

Mitch Walker is set to remain in goal ahead of the injury Andy Rafferty, whilst Liam Bellamy can be expected to deputise at left-back at the expense of the injured Aswad Thomas.

*BS*TOP SCORERS*BF*
Southport’s top scorer in the league this season is Louis Almond, who has found the back of the net eleven times – seven more than second top scorer Gary Jones.

Whites’ top scorer in the league is Ricky Miller with fourteen goals, two ahead of both Stefan Payne and Nicky Deverdics.