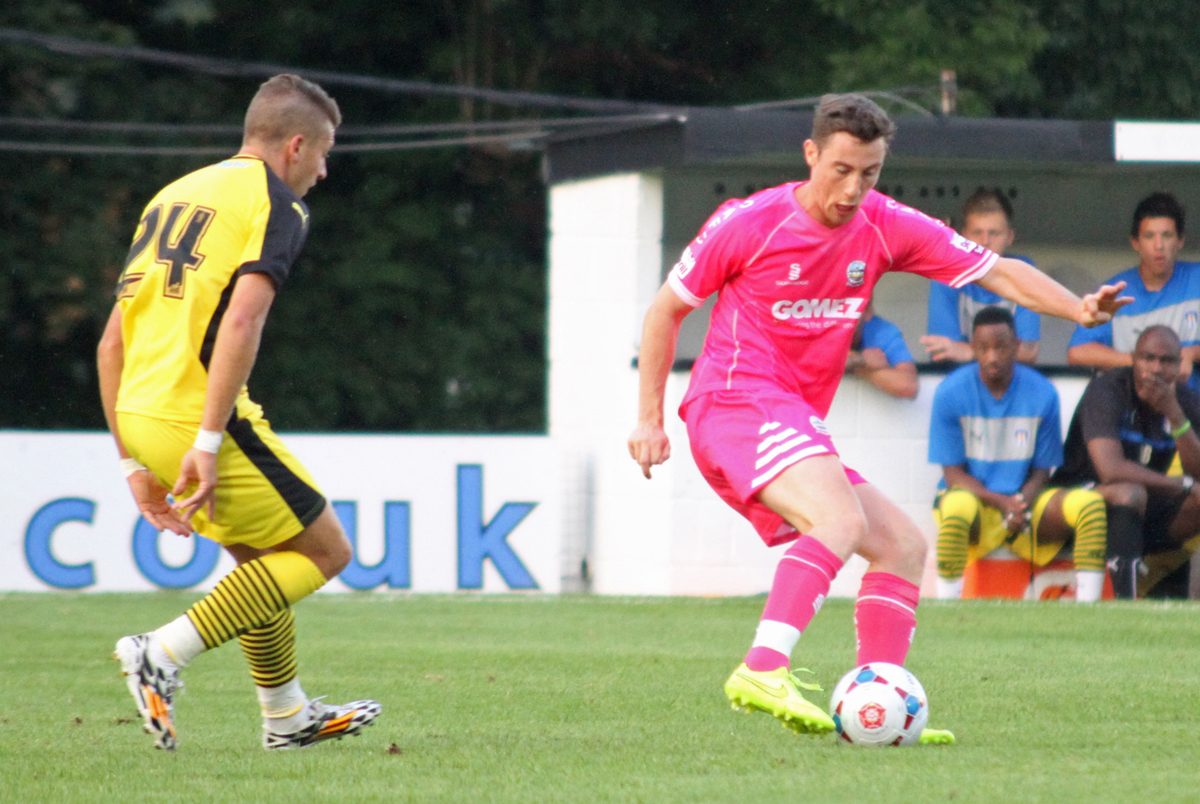 *BS*Dover Athletic make the 512 mile round-trip as they travel to Grimsby Town in search of their first league points of the 2014/2015 season.*BF*

Whites suffered a *Link1* away at Braintree on Tuesday night courtesy of a double from Alan Massey and a James Mulley volley.

Manager Chris Kinnear feels Dover have competed well in the two games that they have played so far. *Link2*: “The two teams we’ve played against, I haven’t seen a side that’s been a better football team than us – they’ve just been stronger in both boxes.”

The Whites boss realises the importance of adapting to the Conference as quickly as possible. He said: “We’ve played two games, against the fifth and sixth placed sides last season, and there will be a lot of sides who don’t score against either.

“And the next game will be harder, against one of the favourites for the league but it’s good to get them out of the way.”

After the defeat on Tuesday night, Kinnear highlighted the importance of a quick recovery. He said: “We can’t feel sorry for ourselves, there’s no pointing fingers and having a go at the lads – it’s getting their heads up and preparing for the next game.”

There are reasons to be optimistic however, as Grimsby are also yet to find the net this season, plus the Whites had a fantastic away record last season winning 13 and losing just five.

*Lpic1*Matt Lock, who was injured for the Braintree game, could make a full recovery from injury and may feature against Grimsby.

Other than that, the Whites manager has a full squad to choose from for the clash at Blundell Park on Saturday afternoon.

Striker Stefan Payne made his debut for the Whites coming on as a second half substitute against Braintree and will offer plenty of pace up-front.

Grimsby were beaten 4-2 on aggregate to Gateshead in the playoff semi-final last season after finishing 4th in the league.

Last season was the second consecutive time Grimsby made the playoffs having dropped into the top tier of non–league football in the 2009/2010 season.

The Mariners had one of the meanest defences in the league last season. Only Braintree and the two promoted teams Luton and Cambridge conceded less.

Paul Hurst’s Grimsby have made a mixed start to their campaign drawing 0-0 with Bristol Rovers on the opening day in front of the BT Sport cameras. Town then drew another blank on Tuesday night at home to Nuneaton with the game finishing goalless.

*Lpic2*Grimsby have got a long list of players out either injured or suspended, but some of those who are injured may be fit and ready for the weekend.

American striker Jon-Paul Pittman and winger Nathan Arnold are still struggling with injuries which they both picked up in pre-season but could be fit for the big clash with Dover.

Last season’s top scorer Ross Hannah is a major doubt through injury. Hannah has played no part in neither of Grimsby’s first two league games.

Summer signing Jack Mackreth is likely to be fit after pulling his hamstring on the opening day draw with Bristol Rovers and could feature in the starting line-up.

Defender Shaun Pearson is available for selection after completing the last of his three match suspension on Tuesday night.

Other defenders Paul Bignot and Chris Doig have also been injured so far this season for the Mariners but could be fit for Saturday.

DR Congo international Aristote Nsiala also retuned for Grimsby in their last game against Nuneaton Town, after being sent off for his previous club Southport at the end of last season.

Mariners winger Scott Neilson is currently serving the last of his three match suspension and will be unavailable to play against Dover.

*Q1*This will be the first time Dover and Grimsby will meet in both clubs histories.

Whites fans will be located in the Osmond Corner stand at the South End of the ground behind the goal.

The closest train station to the stadium is New Clee which is approximately a 10-15 minute walk away from the stadium.

For fans driving to Blundell Park, take the M25 northbound, and then merge onto the M11, A14 in the direction of Peterborough. Take the A46 exit junction towards Lincoln/Newark. Then follow signs for Grimsby on the M180, continue on that road when it becomes the A180. The road runs right past the ground. The ground is adjacent to a McDonalds Drive-thru.

For those of you who cannot make the game, you can keep updated on twitter via the live text. Follow *Link3* for full live updates.