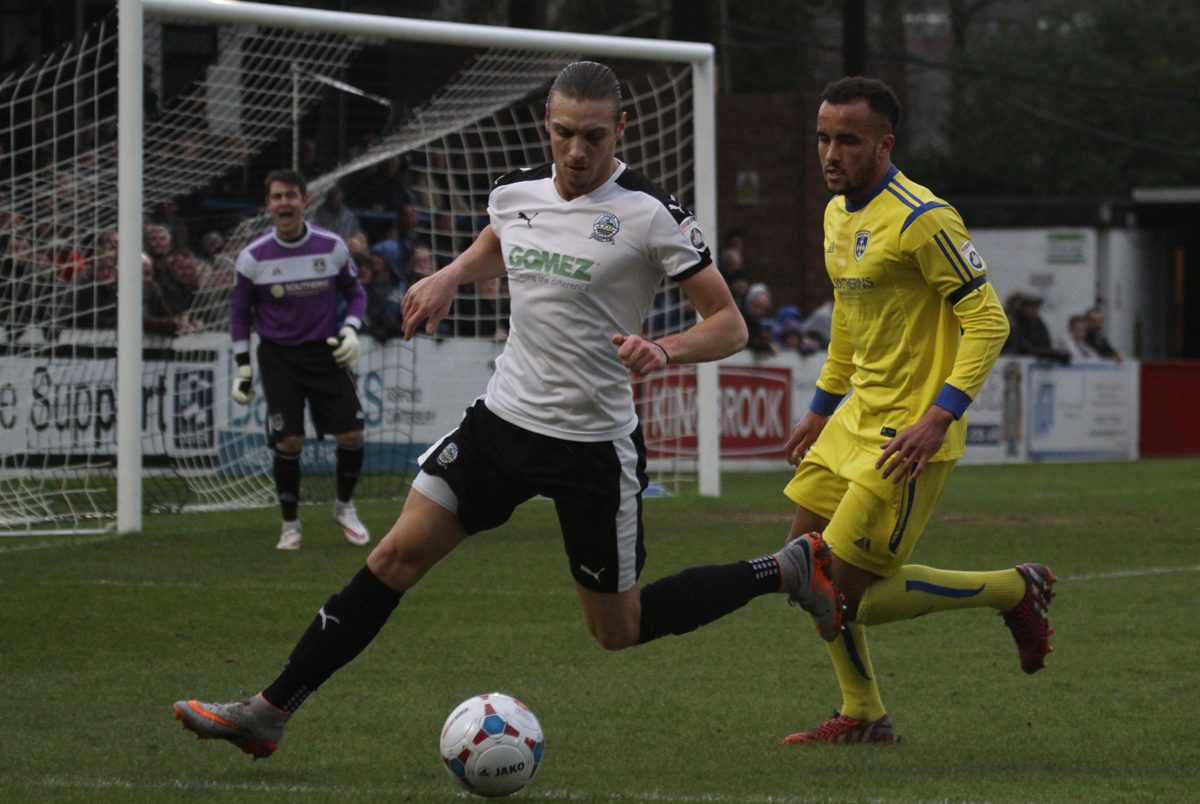 *BS*HEADLINES*BF*
Ten days after the side’s battled to a 2-2 draw at Crabble, the third round replay between Dover Athletic and Guiseley will take place tomorrow (Tuesday). Last Tuesday’s scheduled match was postponed owing to a waterlogged pitch, however the sides will be keen to lock horns once again with a place in the quarter finals of the FA Trophy up for grabs – in addition to £7000 in prize money.

The two sides now know that waiting for the winner in the last eight is a trip to either Nantwich Town or Stourbridge, either of which would bring their own challenges, however at this stage of the competition it is a draw that both sides would fancy.

Both sides come into the match on the back of impressive weekend victories. Whites thumped fellow promotion hopefuls Gateshead 4-0 at Crabble, with a brace from Ricky Miller adding to goals from Nicky Deverdics and Stefan Payne, who celebrated his return from suspension with a sterling performance. Guiseley made the trip to Woking, who also have playoff aspirations, and won 1-0 to record their second win in three league matches.

Tuesday’s tie must be played to a conclusion, so if the scores are level after 90 minutes then extra-time will be played – with a penalty shootout taking place if there is still no winner after this additional thirty minutes play.

Early into the 2013/14 Conference North season, manager Steve Kittrick was axed from the hotseat, with his side having picked up eight points from their opening six matches. Former Bradford City man Mark Bower was brought in as manager, and his influence was apparent as the side finished the season in fifth place. Having overcome North Ferriby United in the playoff semi-final, the side suffered heartbreak as a last-minute winner was conceded against Altrincham in the Promotion Final.

A finishing position of fifth was achieved in the 2014/15 season, but this time it yielded success. Beating AFC Fylde 3-1 on aggregate in the playoff semi-final, they overcame Chorley 3-2 in the Final – despite going 2-0 down – which saw Guiseley promoted into the top tier of non-league football for the first time in their history.

This season, The Lions have flirted with the top half on the odd occasion, but now find themselves in 17th place in the Vanarama National League. They are now eight points clear of the bottom four, and consolidation in the division would be a good finish for Bower’s men.

*BS*RECENT FORM*BF*
Coming into the game, Whites have a record of three wins, one draw and two defeats in their last six matches. Those wins came against Lincoln City (3-2), Southport (FA Trophy, 2-1) and Gateshead (4-0), with the draw against Guiseley which led to this replay, and defeats against Bromley (2-3) and Cheltenham Town (1-2).

Guiseley’s record over the same number of matches shows three wins, two draws and one defeat. The wins came against Dulwich Hamlet (FA Trophy, 2-1), Kidderminster Harriers (1-0) and Woking (1-0), with draws against Grimsby Town (1-1) and Dover in the FA Trophy, and a defeat against Lincoln City (0-1).

*BS*HISTORIC MEETING*BF*
*IS*Saturday 6 February 2016
FA Trophy – Dover Athletic 2-2 Guiseley
Substitute Duane Ofori-Acheampong scored a dramatic late equaliser to keep Dover’s FA Trophy dream alive at Crabble. The big striker turned home winger Ricky Modeste’s cross from close range with just a minute of normal time remaining to earn Whites a replay in Yorkshire on Tuesday night. Guiseley appeared to be course to put their name in the hat for Monday’s quarter final draw with goals from Will Hatfield and Gavin Rotherey heading into the final seconds. But with the clock ticking down, Modeste went on a surging run before firing a cross across the visitors goalmouth and Ofori-Acheampong did the rest. It was his second goal of the season, and it ensured his team live to fight another day. *IF*

*BS*TEAM NEWS*BF*
New signings Tyrone Marsh and Harry Crawford – who both made their debuts for Dover against Gateshead on Saturday – are both ineligible to play. The starting XI should remain the same as on Saturday, with Whites manager Chris Kinnear confirming that all players from that game came through unscathed.

*BS*TOP SCORERS*BF*
The top scorer on Guiseley’s books is James Hurst, who is on eight for the season – seven of which came whilst at previous club Torquay United. Whites’ top scorers in all competitions are Ricky Miller and Stefan Payne, both on 15 goals, two ahead of Nicky Deverdics.