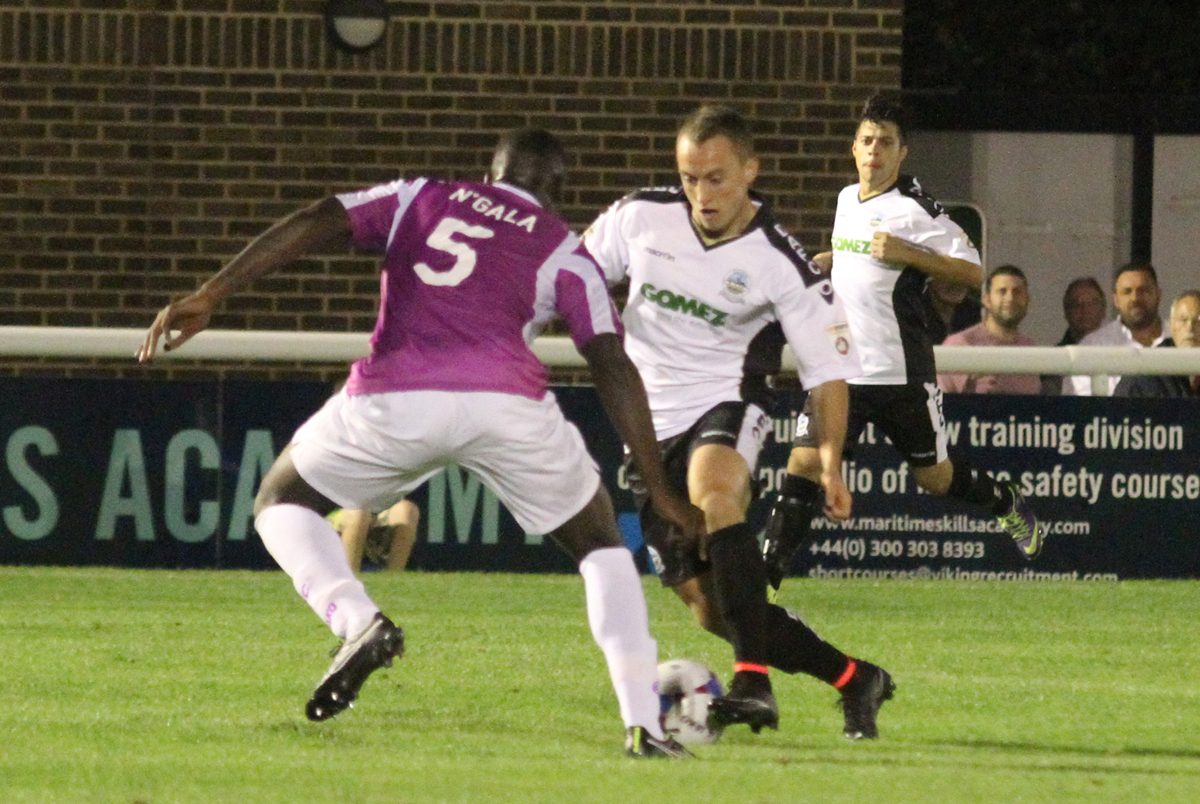 *BS*Dover Athletic will be looking to get back to winning ways as they host Macclesfield Town at Crabble on Saturday.*BF*

*Link1* on Wednesday evening courtesy of a Luisma Villa header and a brace from Luke Gambin in front of the BT Sport cameras.

Substitutes Christian Nanetti and Ricky Miller were denied by the crossbar late on in the game while joint top scorer Stefan Payne saw his early chance saved by Bees goalkeeper and August player of the month Graham Stack.

*Q1*Manager Chris Kinnear is wary of Macclesfield ahead of the game on Saturday. He said: “Macclesfield are eighth. They are an ex league club in a good catchment area and the type of team that lots of players want to play for.”

He added: “You can lose to anybody in this league and we are probably the least experienced side by far. We just have to make sure we keep on improving.”

Ricky Modeste still remains on the sidelines with an injury that he suffered against Eastleigh last month. Kinnear said: “We have missed Ricky, he gives us a bit of pace down the one side and he runs past people.”

Defender Sean Francis is also unavailable due to an injury he picked up in Dover’s first win of the season against Eastleigh.

Deadline day arrivals Connor Essam, Soloman Taiwo and Ricky Miller have all featured since joining the club. Essam and Taiwo are set to keep their places in the starting line up, while Miller is pushing for his first start for Whites since joining on loan from Luton Town.

*Lpic1*Kinnear could keep the same starting XI for the third game in a row, but may rotate his squad with the players only getting two days rest, meanwhile their opponents will have three.

Goalkeeper Mitchell Walker and the Dover defence will be looking to keep their first clean sheet of the season on Saturday. Their opponents have scored nine goals so far this campaign, conceding just six. Only Barnet, Kidderminster and Torquay have conceded less.

Macclesfield Town, also known as The Silkmen, held second placed Halifax Town to a 1-1 draw at the Moss Rose stadium on Tuesday night.

They suffered their first defeat of the season in the Cheshire derby against Chester last Saturday, where John Rooney’s first goal of the season was enough to defeat Macclesfield.

Portuguese midfielder Adriano Moke is a major doubt after an injury he picked up in The Silkmen’s first defeat of the season.

Experienced midfielder Danny Whitaker is also a doubt for the game on Saturday, however he has been back in training this week. He last featured in the third game of the season against Woking.

New signings Will Haining and Domaine Rouse joined the club at the end of August and have both regularly featured for the club since joining. Haining has played in more than 250 Football League games including two years in his native Scotland with St Mirren.

Despite playing out two 0-0 games so far this season, The Silkmen have had seven different goal scores, with striker Waide Fairhurst top scorer with three goals in eight games.

Macclesfield Town signed Stoke duo Adam Thomas and Alex Grant on loan until the end of December. They both played for the under 21s for Stoke and are both eligible to play at the weekend.

Last campaign, The Silkmen finished a modest 15th position, which was 10 points above the drop zone and 16 points behind a play-off position.

The Silkmen were relegated from the fourth tier of English football in the 2011/2012 season, finishing last with 37 points. They also achieved the unflattering statistic of the longest winless run, going 18 games without picking up three points that campaign.

*Lpic2*Last season’s top scorer for The Silkmen was Scott Boden, who netted 18 times for Macclesfield Town in his first permanent season at the club. However, he joined Conference rivals Halifax Town in July.

Last campaign, Macclesfield reached the FA Cup 3rd round and managed to take Championship club Sheffield Wednesday to a replay.

The Silkmen equalised in the second half with the game finishing 1-1 at the Moss Rose stadium. In the replay at Hillsborough, three goals in the last 12 minutes from Wednesday saw off John Askey’s spirited team.

Dover’s opponents on Saturday were Football League regulars from 2004/2005 until their relegation in the 2011/2012 season.

The match at the weekend will not be segregated.

Supporters that cannot make it to Crabble on Saturday can follow the game on Twitter via @DAFCLiveText, where regular updates of the game will be provided.