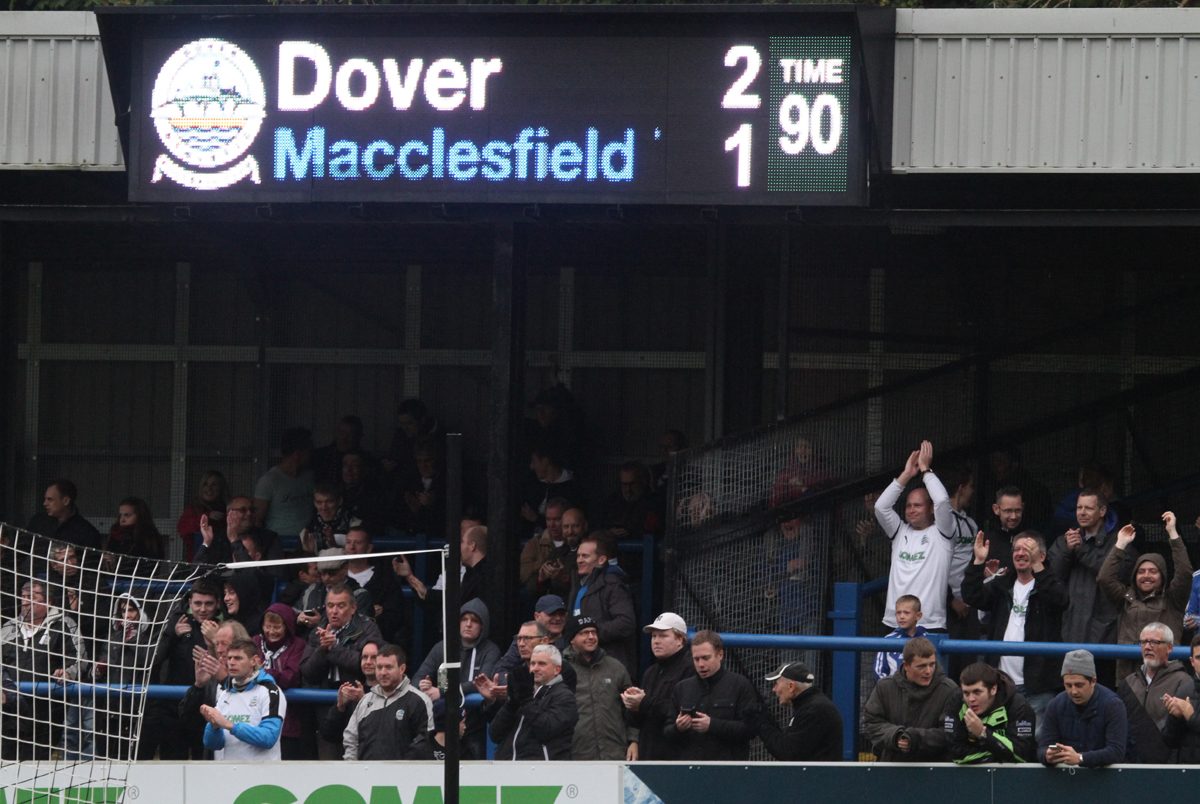 *BS*HEADLINES*BF*
With progression to the quarter-final stage of the FA Trophy sealed thanks to a midweek win over Guiseley, Chris Kinnear’s men are on the road again this Saturday with a trip to Macclesfield Town. Tuesday night’s results in the Vanarama National League were favourable for Dover, with fellow playoff hopefuls Eastleigh and Braintree Town both losing, meaning that Whites still sit in fifth place in the league table ahead of the weekend’s clash.

Macclesfield lost their FA Trophy replay on Tuesday night, against Torquay United, continuing a poor run of form for the Cheshire side. They remain with an outside chance of making the playoffs, but will need to arrest their slump in form if they want to get their promotion hunt back on track.

A win for Dover could see them climb above Tranmere Rovers – who host league leaders Cheltenham Town – and into fourth place. Three points for Town would give them the chance to jump as many as five places, and into seventh spot.

Following their relegation from League Two in the 2011/12 season, Steve King was appointed manager in the summer of 2012 for the Silkmen’s first season back in non-League football. Playing attractive football they were often chasing a play-off position and reached the fourth round of the FA Cup for the first time in their history when they lost by a single goal to the eventual winners Wigan Athletic. Towards the end of the season King was dismissed with John Askey taking over as caretaker manager, the team completing the campaign in 11th position.

John Askey was appointed manager in the summer of 2013 with former Silkmen Efe Sodje as his assistant, completing the season in fifteenth position in the league and reaching the third round of the FA Cup going out to Championship club Sheffield Wednesday after a replay at Hillsborough.

The 2014/15 season saw a successful season for the Silkmen ultimately end the club finishing just a point and place from the Vanarama Conference Play-Offs.

This season, The Silkmen have struggled for consistency and currently find themselves in twelfth place in the Vanarama National League. They are just five points behind fifth place, but have played more than most of their other playoff hopefuls – meaning that positive results against these rivals need to be picked up.

*BS*HOME AND AWAY*BF*
At home this season, Macclesfield have the fourteenth best home record in the division, with seven wins and two draws from their fifteen matches at Moss Rose.

Away from home, Dover have the ninth best away record in the division, with six wins and four draws from their sixteen matches on the road in the league.

Highlights of our 1-0 defeat at Crabble last season can be seen here:

With Whites’ only defeat in the previous six games occurring away to Nuneaton Town, scooping a point away to Bristol Rovers plus three home wins in the league on the bounce left Kinnear’s men buoyed and looking to attain a result, however it was not to be and the visitors were lucky to concede just one thanks to some assured goalkeeping by Andrew Rafferty.

The Silkmen snatched the only goal of the game on 66 minutes. In a move which took them from their own half right up the pitch, Fairhurst was fed the ball up the field on the right hand side from Paul Lewis who had managed to dispossess Christian Nanetti and leave him in his wake. Holroyd raced past Tom Wynter to collect Fairhurst’s pass before supplying Lewis with the ball at the near post. Macclesfield’s number 8 was then able to comfortably slot his effort past Rafferty from close range and send Dover home empty handed. *IF*

*BS*TEAM NEWS*BF*
New signings Tyrone Marsh and Harry Crawford, who both made their debuts as substitutes in last weekend’s 4-0 thumping of Gateshead, were ineligible for Tuesday’s FA Trophy tie but will be available for selection once again this weekend.

Mitch Walker, on the back of consecutive clean sheets, is expected to keep his place in goal ahead of the injury Andy Rafferty, whilst Liam Bellamy can be expected to deputise at left-back at the expense of the injured Aswad Thomas.

*BS*TOP SCORERS*BF*
Macclesfield’s top scorer is hotshot Kristian Dennis, who has twenty-four goals to his name this season – all but three of them coming in the Vanarama National League. Dennis aside, Town’s top scorer is Danny Whitaker, who sits on six.

Whites’ top scorer in all competitions is Stefan Payne, who scored a brace on Tuesday night to put his tally up to seventeen for the season.