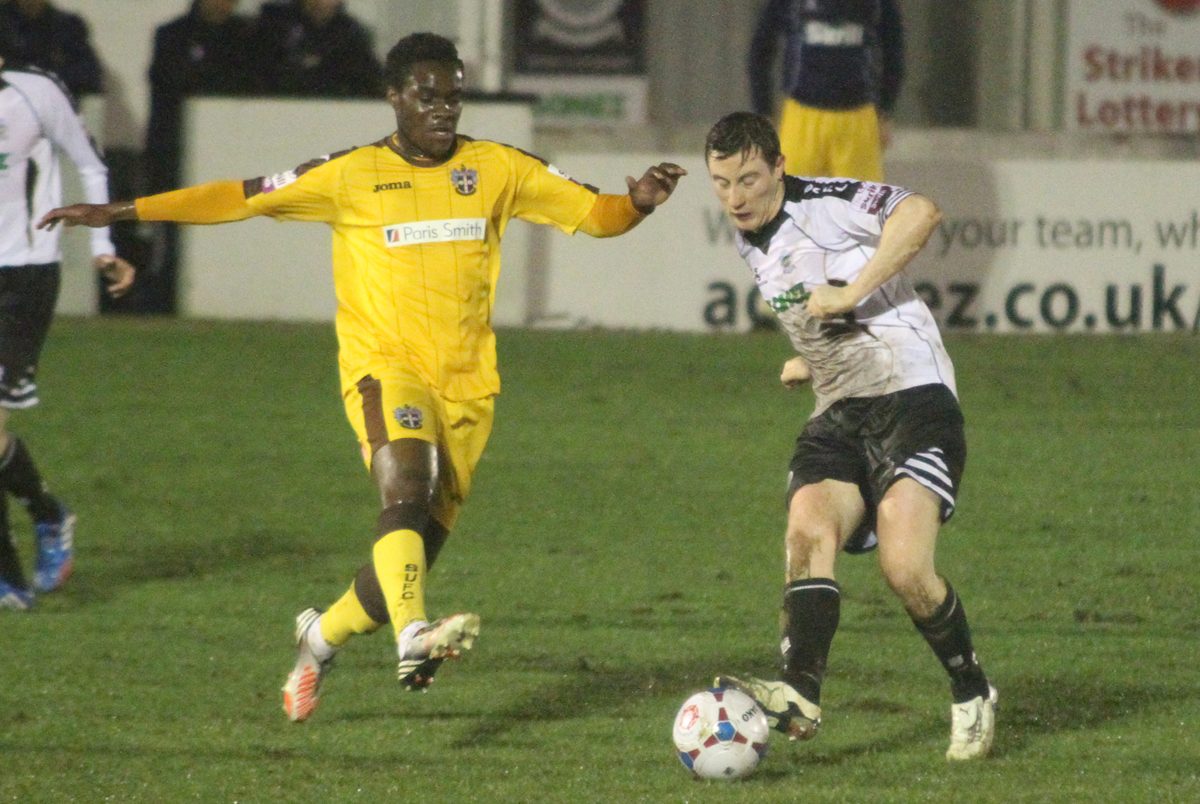 After Whites’ disappointing 1-1 draw against Whitehawk on Easter Monday, their play-off hopes were all but over but quite amazingly, they clinched the final play-off spot on Saturday in dramatic fashion.

With the score locked at 1-1 against Hayes & Yeading United with 10 minutes left to play, news floated through that play-off rivals Havant & Waterlooville failed to defeat Tonbridge Angels before Barry Cogan converted a late penalty to secure his side 5th place on goal difference.

Dover will now face Sutton in a two-legged play-off semi-final tie for a place in next Saturday’s final against the winners of the other play-off tie – Bromley and Steve Brown’s Ebbsfleet United.

*Lpic1**BS*TEAM NEWS:*BF*
Saturday’s hero, Cogan, will miss the play-offs as he starts a 4-match suspension on Wednesday evening – with the Irishman handed a 3-match suspension for a straight red card at Eastleigh two weeks ago plus an additional game for picking up his second of the season after also getting sent off at Basingstoke Town back in November.

It is the second season in succession Cogan will miss the play-offs after injury ruled him out of last season’s games, and he will be a big loss for Chris Kinnear’s side after enjoying his most prolific season in a Whites shirt.

As for Sutton, Simon Downer and Damian Scannell – who scored a late aggregate equaliser for Eastleigh in last season’s play-off semi-final second leg at Crabble – are expected to return to the side after being rested during the U’s game at Whitehawk on Saturday.

Charlie Clough and Will Spetch will both face late fitness tests while Jamie Slabber and Louis John will not feature at Crabble, with the latter set to miss the rest of the season with a hamstring injury.

*BS*OPPOSITION FORM:*BF*
Sutton head into this fixture having finished runners-up in the Skrill South but also finished with the third best away form in the league behind Dover and Concord Rangers.

The U’s won 8 of their 21 games on the road – including a *Link1* thanks to Craig Dundas’ early goal – and have scored the joint-second most away goals while losing on only four occasions.

Their impressive grand-total goal-tally of 77 has largely came from the strikeforce trio of Jamie Taylor, Dundas and Slabber who netted 45 goals between them, with Taylor finishing joint-second in the Skrill South goalscoring charts with 18 goals to his name.

The side from Surrey also possess the record of having the 2nd meanest defence in the league behind Dover, having conceded only 39 goals out of their 42 games and are tipped favourites to progress into the final at the expense of Whites.

*Lpic2**BS*HEAD-TO-HEAD RECORD AT CRABBLE:*BF*
Dover have a poor record against their play-off opponents at Crabble, having not won against them in the last three meetings and only managing to find the net once in the process.

Their last victory came towards the end of the Ryman Premier winning season of 2008/09 when *Link2* under former Gillingham manager Andy Hessenthaler, and the victory is still fondly remembered by many Dover fans to this day.

James Rogers – the only current player to feature in that win – opened the scoring before further goals from Frannie Collin, Shaun Welford (2), Matt Bodkin and Dean Hill secured promotion to the Conference South – a league Whites are looking to get promoted from this season.

*BS*PLAY-OFF STATISTICS:*BF*
Dover are looking to revive their poor play-off record after picking up only two victories in their history – neither of which have came at Crabble.

The first victory came at Metropolitan Police when Craig Wilkins scored in a 1-0 win in 2006 while Wednesday evening will mark a year to the day Whites picked up their second – with Moses Ademola, Ben May and Daryl McMahon all netting in a 3-1 win at Eastleigh last season.

No side has ever won the play-offs after finishing 5th in the Conference South since the formation of the league in 2004, and the last team to reach the final from 5th was Woking in 2010 at the expense of Whites.

Meanwhile, Sutton – who are chasing promotion to the Conference Premier for the first time since 2000 – will feature in their second play-off campaign in just three seasons.

The U’s finished in a respectable 4th place in the 2011/12 season after gaining promotion from the Ryman Premier League the previous season, but lost to Welling United in the semi-finals.

Please note that season-ticket holders have to pay to gain access into Crabble, which will be at the usual admission fee of £13.

If fans cannot make the game then *Link3* will be provided by Kieran Dodd and Matt Clements from 19:00 – with pre-match build up, team news, commentary of the game and photos brought to those following.