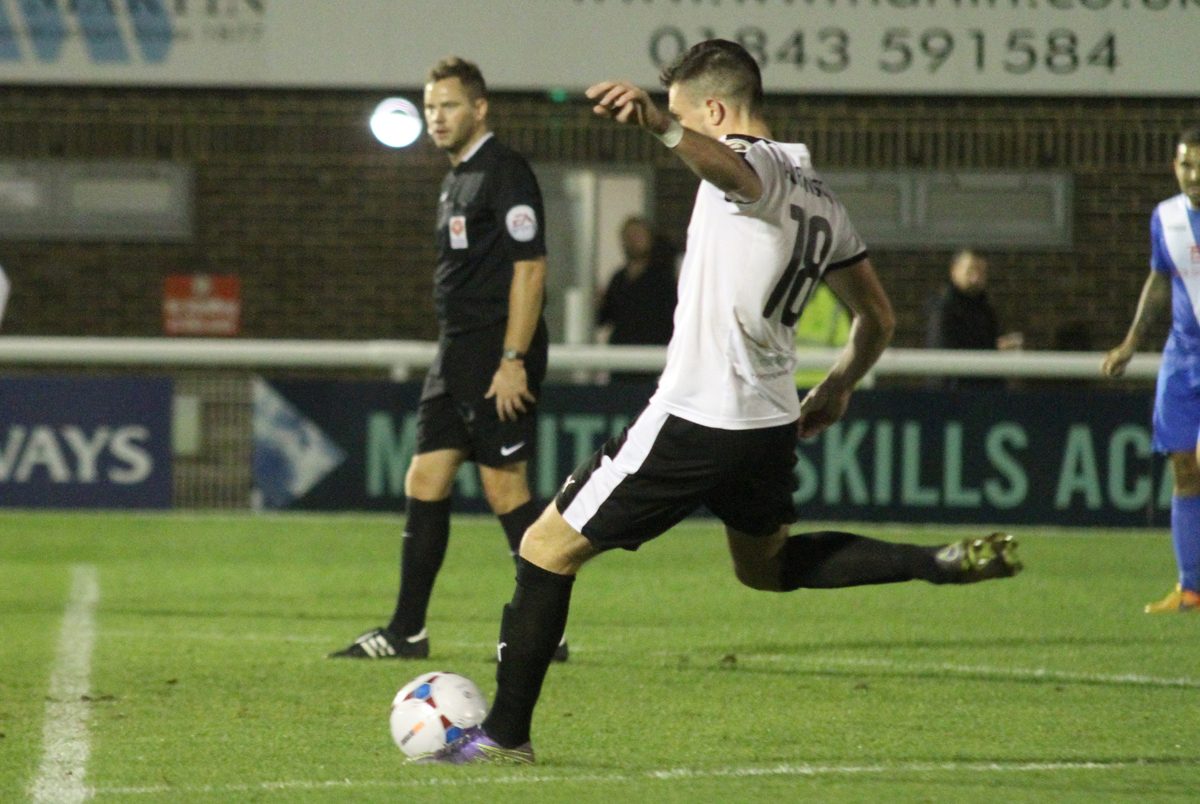 *BS*Dover Athletic begin their FA Trophy campaign on Saturday, travelling to take on Vanarama National League South side Whitehawk. Last season, Whites made it to the quarter-final stage, and will be keen to better that run this time around.*BF*

After an inconsistent November, Chris Kinnear’s side got this month off to the perfect start last Saturday with a 5-2 thumping of Aldershot Town. That victory returned the side to third place in the Vanarama National League standings, but attention now temporarily turns to the FA Trophy, with Whites starting their 2015/16 campaign against Whitehawk this weekend.

Before Saturday, the side had won only one of their previous six matches in all competitions, but confidence was fully restored with the comfortable three points picked up at Crabble against Barry Smith’s Shots side.

Eastleigh made up some ground on Whites with their win over Macclesfield Town on Tuesday night, but their one-goal margin of victory ensured that they stay below Dover in the league table. All Vanarama National League clubs are in action in the FA Trophy over the course of the weekend, meaning that Kinnear’s side will hold onto their third place for at least another week.

The FA Trophy is a competition that Dover had a good run in last season. At this stage last time around, a victory away at Lowestoft Town (3-1) was followed up by wins against Havant & Waterlooville (1-0) and Woking (1-0 in a replay, after an initial 3-3 draw), before eventually losing in the quarter-final stage to Bath City (2-1 in a replay, after the initial 3-3 draw). That night in Somerset, at Twerton Park, saw Whites’ Wembley dreams end for another season – but there is now a chance to put any lingering heartbreak well out of memory.

And so, all attention turns to The Enclosed Ground, on the outskirts of the city of Brighton, for the beginning of another journey – with £5,000 up for grabs in prize money.

Whilst the league will remain a real priority for the club, the FA Trophy could take on increased significance, bearing in mind the club are no longer in the FA Cup. For our opponents on Saturday, though, they may have one eye on a potentially big payday. Four days after facing us, Whitehawk host Dagenham & Redbridge in their FA Cup Second Round replay, knowing that the winner of that tie will travel to Goodison Park to take on Premier League side Everton in Round Three.

It is a situation which could work either for or against Whites – despite players being keen to avoid injury ahead of their Cup match, they will also be keen to impress boss Steve King sufficiently to be considered for a starting berth in the Cup.

Speaking to BBC Sussex, though, King seemed adamant where his focus was: “I will ban the name Everton around the dressing room and around the club. It’s not what this is about – that (the FA Cup) is a bonus. We need to make the play-offs this year or get promoted. I have to put the boys’ feet firmly back on the ground.”

On Tuesday night, they well and truly adhered to King’s words, and won 1-0 away at second-place Maidstone United in the league. That win lifted Whitehawk up to fourth place, five points behind The Stones with a game in hand. King’s men are 12 points behind runaway leaders Ebbsfleet United, who finally seem to have found the recipe for success this season.

The Hawks have won four of their last seven games in all first-team competitions, and with their best results coming in games they were underdogs in. In the First Round of the FA Cup, they beat Lincoln City – 8th place in the Vanarama National League – 5-3 at home, before picking up a 1-1 draw away at Dagenham & Redbridge to set up next Wednesday’s replay.

Recently in the league, as well as their win at Maidstone, they have beaten Margate 6-2 – and they recorded another victory over a Kent side in the previous round of the FA Trophy when they beat Dartford 2-1 at Princes Park. That’s Dartford, Maidstone United and Margate who have all lost to King’s side this season – Dover will need to be at their best to restore some pride for Kent!

Looking at the team news, Whites should remain unchanged from the win against Aldershot Town. That should mean Andy Rafferty continuing in goal ahead of Mitch Walker, and Ricky Modeste given the nod once again in a three-pronged attack alongside Ricky Miller and Stefan Payne.

Whitehawk’s top scorer this season is Danny Mills, who has scored 10 goals in the league, and 7 in the FA Cup. Whites’ top scorer in all competitions remains Stefan Payne with 11, two ahead of Ricky Miller and three in front of Nicky Deverdics.

The two sides met at Crabble in Whites’ first pre-season friendly of the summer, back in July – on that day, the visitors ran out 4-1 winners but scant relevance can be put on that result considering the number of trialists on show for both sides. The last competitive fixtures between the sides came in the 2013/14 season, when Dover won 1-0 away from home in the August, before drawing 1-1 at Crabble the following April.

Highlights from that home draw can be viewed here: