It’s been over three years since these two sides last met and Chris Kinnear will be hoping his team are victorious once more when their Kent rivals come to visit on Bank Holiday Monday.

Whites won at Fleet in the 2014 Skrill South Play-Off Final, but Daryl McMahon’s squad travel to Crabble unbeaten in six National League matches following promotion from the National League South in May.

In fact it’s been 32 games since Ebbsfleet last tasted defeat, a 2-1 loss to Dartford on Boxing Day.

Home fans will recognise some of the visiting players.

Dean Rance, Yado Mambo and boss McMahon have all played for Athletic under Kinnear.

One former White not present will be Sam Magri. The defender is away on international duty with Malta.

Both sides played out a goalless draw at Stonebridge Road on Saturday.

Chris Bush almost scored on his debut, but headed Jack Powell’s corner onto the roof of the net.

Yado Mambo stopped Jordan Burrow in his tracks on the half-hour mark as the visitors began to press.

Luke Coulson could have won the game late on, but was unable to connect properly to Jack Payne’s pass.

The big striker headed home Ricky Modeste’s cross in front of a 4000 strong crowd at Stonebridge Road in the Skrill South final.

The home fans were cheering after they thought Alex Osborn had equalised, but the midfielder’s angled drive had hit the side-netting.

Sean Raggett almost made the game safe late on, but his headed effort floated wide.

Assistant Manager Jake Leberl confirmed on Saturday night Jamie Allen will be missing once again with a hamstring strain.  Otherwise, boss Chris Kinnear has a fully fit squad to choose from.

Striker Ryan Bird is the cover star for Saturday’s programme while the feature interview is with captain Mitch Brundle.

You will also be able to read the thoughts of boss Chris Kinnear and catch up with Lee Hook’s humorous take on life at Crabble in his regular column. 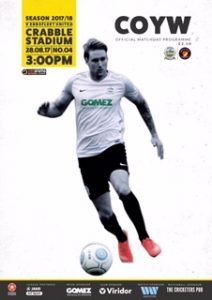 There will be a Supporters Club coach making the trip to Tranmere on Saturday 2nd September and it’s not too late to reserve your seat on it.

It leaves Crabble at 9:15am and the cost is as follows:

There is also a coach travelling to Aldershot on Saturday 9th September, departing Crabble at 11:30am.

Please call or text Andy on 0793 4300335 to book your seat, or see him in the Centre Spot after the game against Ebbsfleet on Bank Holiday Monday.