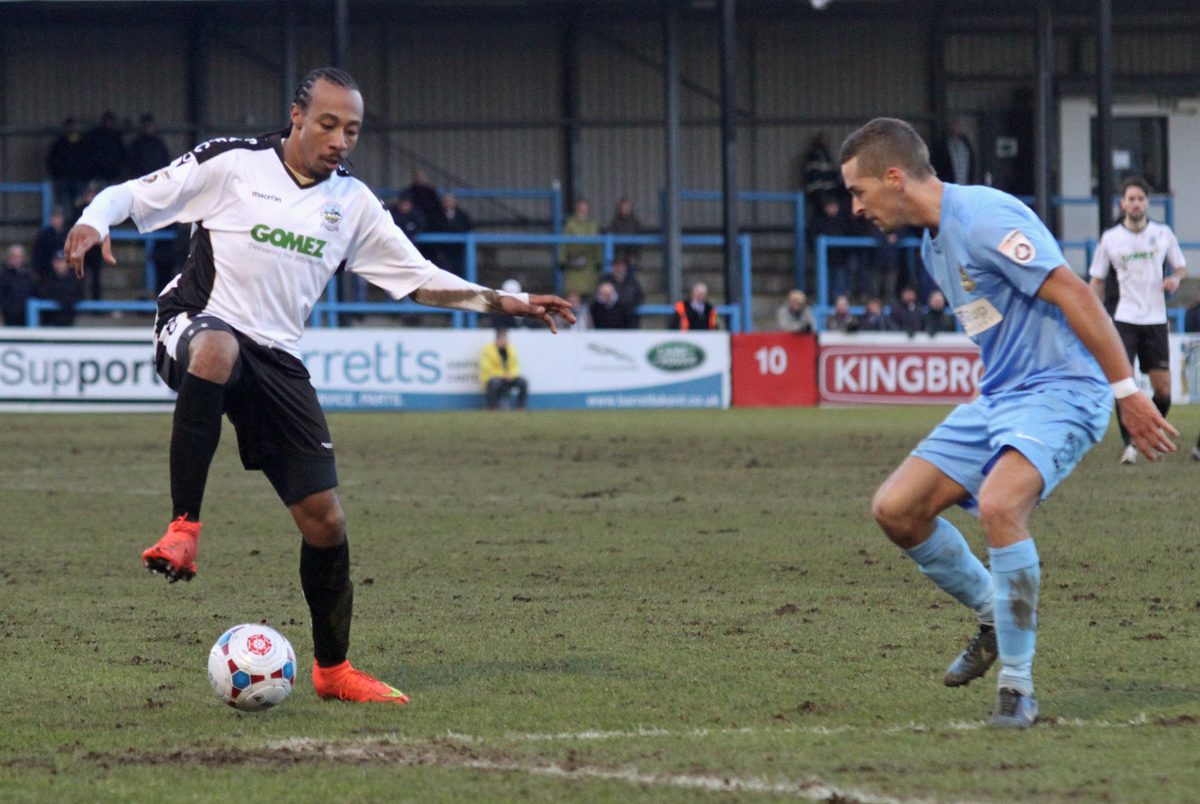 *BS*Dover Athletic continue their FA Trophy campaign on Saturday, with fellow Vanarama National League side Southport coming to Crabble. Last season, Whites made it to the quarter-final stage, and will be keen to better that run this time around.*BF*

After the club’s excellent 3-2 victory over Lincoln City in the league on Saturday – a match in which Whites found themselves behind on two occasions, but rallied superbly to pick up all three points – Chris Kinnear’s men now turn their attentions to the next match in their 2015/16 FA Trophy campaign.

Whites are in this stage thanks to a 3-1 victory away at Whitehawk in the First Round, with opponents Southport here after a 3-2 replay victory (following an initial 0-0 draw) against Vanarama National League North outfit Worcester City.

The Sandgrounders have seen their form completely turn around since the appointment of Dino Maamria in mid-November. Upon his arrival, the side were in the relegation zone and in turmoil. Now, two months on, the Merseyside club are in 14th place, ten points clear from safety – and have won six of their last seven National League matches, picking a point up in the other.

Therefore, on form alone, this is arguably as tough as it could have come for Whites as they seek to progress in the FA Trophy and emulate their quarter-final run of last season. The respective league positions of the two clubs, added to Dover’s strong home record, means that the hosts will start as favourites but cannot underestimate Maamria’s revitalised men one iota.

At this stage of the competition last season, Whites won 1-0 away at Havant & Waterloovile, with a late goal from Ricky Modeste sealing the side’s progression through to the next round. In an interview for the club’s matchday magazine which will be on sale on Saturday, midfielder Nicky Deverdics expresses his disappointment in the club’s exit against Bath City last time around: “On the day we did not turn up and got caught cold early on – we know we messed it up big style. Everyone still regrets it as we should have got to Wembley – if not won it.”

And so, Saturday offers Whites a chance to continue the path of erasing those memories of last season – plus, more importantly, picking up £6,000 in prize money for winning the tie.

Away from home, Port have the 11th best record in the division, having picked up wins away at Woking (2-1), Kidderminster Harriers (1-0), Welling United (1-0), Gateshead (1-0) and Wrexham (1-0). Their ten goals scored on their league travels is the joint second lowest in the division, however their tally of twelve conceded gives them the third meanest away defence in the Vanarama National League.

Whites continue to impress at home, having lost just twice in thirteen matches, and picking up 27 points.

Dover are likely to remain unchanged from the win against Lincoln City, with Tyrone Sterling expected to keep his place in central defence ahead of Jamie Grimes. Stefan Payne will serve the second match of his four game suspension, giving Tom Murphy a further opportunity to re-establish himself within the starting XI. The focal point of attack will be Ricky Miller, who scored two at Sincil Bank last weekend.

The two sides met at Haig Avenue back in September in the Vanarama National League, and were held to a 0-0 stalemate. Despite hitting the woodwork early on in the first half as well as having chances cleared off the line later on in the match, Whites could not find the back of the net against a resilient Southport side. Ricky Miller shook the top of the crossbar with an audacious effort from 25 yards midway through the half after driving forward up the field. Whites also had an effort cleared off the line by Matty Challoner in the second half after Sean Raggett headed on target as the visitors were pressurising to find a winner.

Last season, the two league matches between the sides ended in 2-2 draws. Highlights from the home match, in which Sean Raggett and Dan Holman netted for Dover, can be viewed here:

If the match is drawn, then the replay will be held at Haig Avenue on Tuesday 19th January, with kick-off at 7.45pm.