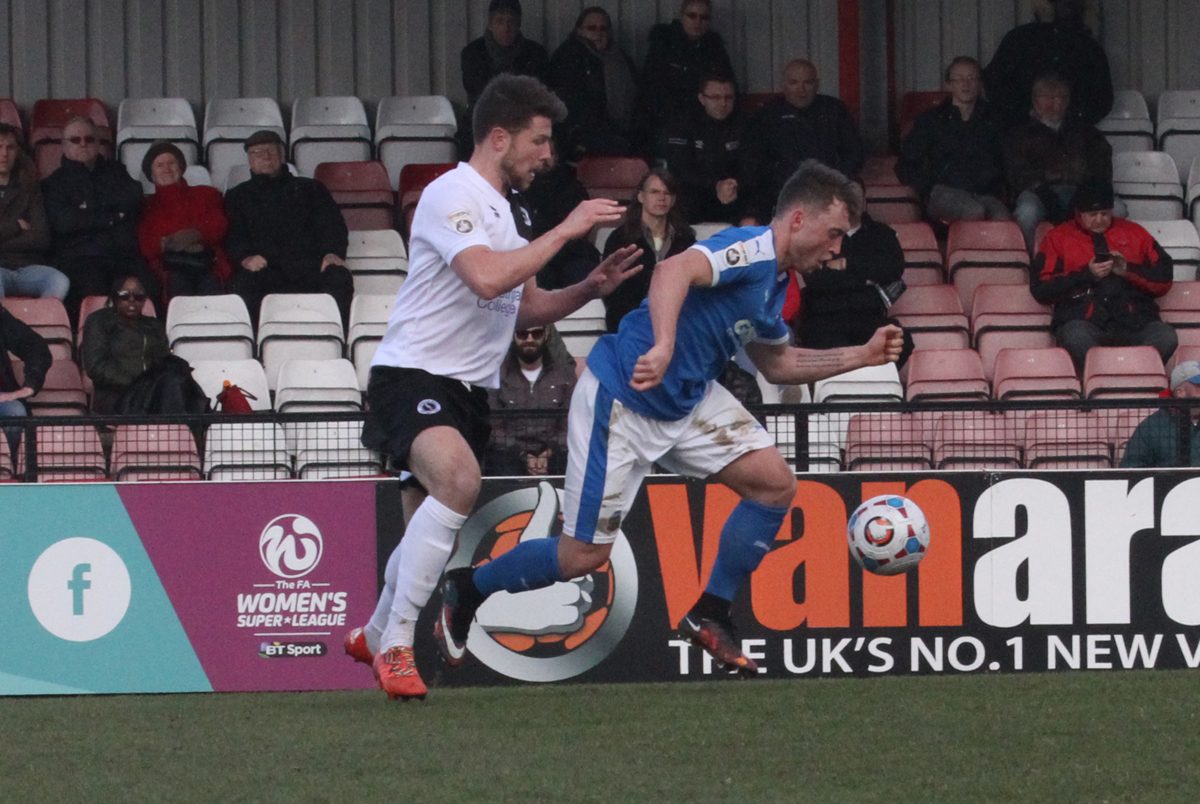 BOREHAM Wood won’t be thrilled to see Moses Emmanuel in the Dover squad for tonight’s National League clash at Crabble.

You see Emmanuel, the first of four Dover signings last Friday, proved to be a thorn in the side of Wood when he was playing for Bromley against them last season.

Emmanuel, who came on as a second-half substitute in the goalless season opener at Wrexham on Saturday, scored in both games against the Hertfordshire side.

And Dover could do with Emmanuel keeping that record going if he does feature tonight.

Whites came from behind to win the first encounter of the season at Crabble 2-1 with goals from two of the players who played at Wrexham on Saturday, Jack Parkinson and captain Jamie Grimes.

Boreham Wood started this season with an impressive 1-0 win at home against Forest Green Rovers.

Ricky Shakes scored what proved to be the only goal of the game after 30 minutes.

Doverathletic.com spoke to the Borehamwood & Elstree Times about tonight’s clash and it appears Wood boss Luke Garrard is an admirer of what Whites have accomplished in non leagues top-flight.

Garrard said Whites are an example to follow for part-time clubs.

He said “100 per cent Dover are a club to look up to who have had success on a limited budget.

“You look at what they and Braintree Town achieved and it was phenomenal.

“They play in a certain way and they get joy from it. We’ve got to go there and do what we did against Forest Green Rovers, play on the front foot and take the game to them and we will go from there.”

Whites have a clean bill of health with Jamie Grimes recovered from the cramp which saw him limp off in the final couple of minutes at the Racecourse Ground.

As for the visitors, they will be without attacking midfielder Daniel Uchechi but Anthony Jeffrey will be back in the squad after missing Saturday’s game against his parent club.

The winger re-joined Wood on a season-long loan from Rovers this summer and was therefore forced to sit the game out.

Centre-back David Stephens is a doubt after going off late on Saturday.

If Stephens misses out, then Joe Devera could replace him with either Danny Woodards or Femi Ilesanmi coming in at left-back.

Kick-off is at 7.45pm, but if you cannot make it to Crabble, we will have live updates on Twitter – @DAFCLiveText – follow us and get all the news as it happens!