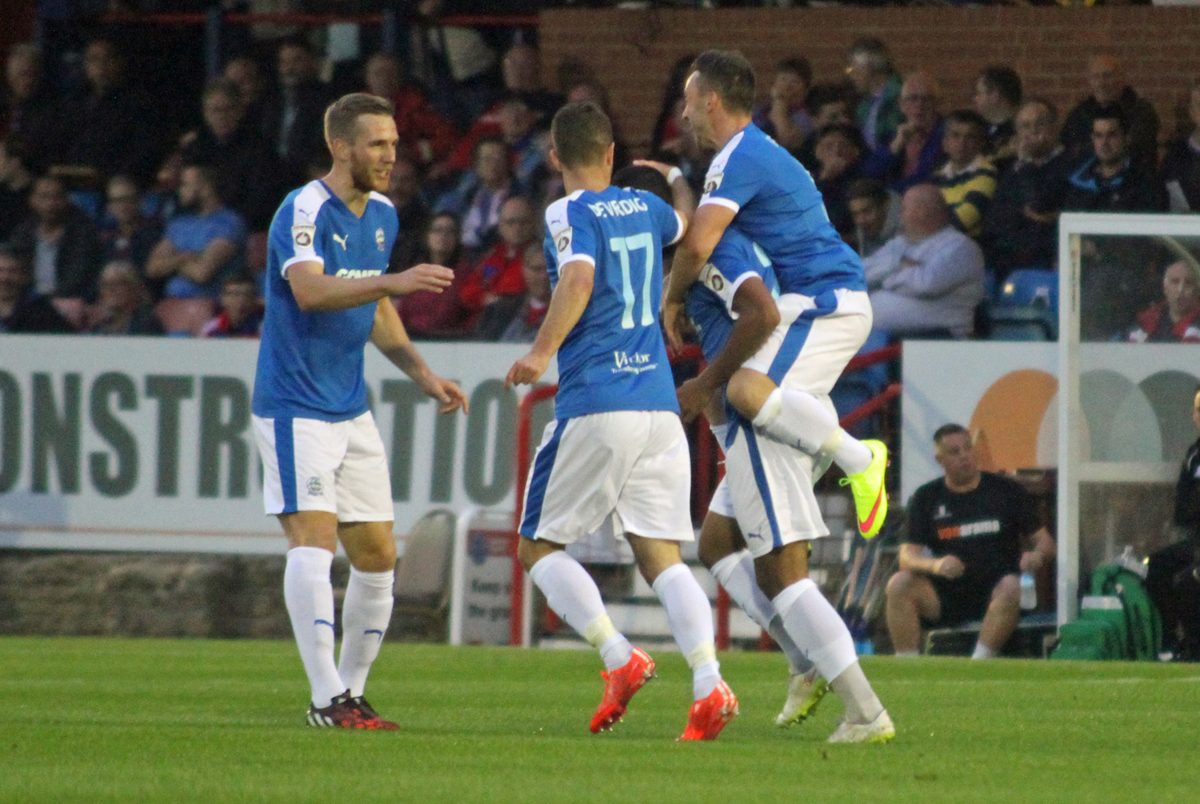 *BS*Dover Athletic welcome Aldershot Town to Crabble in the Vanarama National League on Saturday, keen to get December off to a winning start. The Hampshire side have lost their last five matches in all competitions.*BF*

Chris Kinnear’s men will be glad to see the back of November, after a tough run of fixtures saw the side lose four of their six fixtures – three of them in the Vanarama National League, and defeat in the FA Cup First Round.

The opening of advent calendars now gives Whites the opportunity to get their playoff push back on track, and Saturday sees a welcome return to Crabble after long trips to Chester and FC Halifax – which yielded one point. Speaking to the club’s media team this week, Kinnear said of the recent form: “Anyone can beat anyone in this league and the big clubs are the only ones that are able to show consistency.

“However, we are happy to continue with youth and ambition and we have a squad who are all 28 and under. They all want to do well and are trying to get better all the time. It’s a brilliant challenge and we are striving to win every point possible.”

Saturday’s performance at Halifax is now well out of the side’s thought process, and all attention is now on the visit of Aldershot Town this weekend.

Matches between Whites and The Shots have always been competitive affairs, but if you look at the match on the basis of recent form, it’s the best chance Dover could have to get back to winning ways. Aldershot are bottom of the form table over the past 6 games in the league, having picked up just two points from a possible 18.

Those points came from consecutive 1-1 draws against Bromley and Southport, and are now on a losing streak of four matches in the league (1-2 vs Lincoln City, 0-2 vs Kidderminster Harriers, 0-1 vs Wrexham and 0-2 vs Cheltenham Town).

Whites now sit in sixth place in the Vanarama National League standings, but are level on points with Lincoln City and Eastleigh, in fourth and fifth place respectively. The chasing pack remains unrelenting, with just three points separating Dover in sixth from Braintree Town in ninth. A win for Dover could see them return to the third place position that they relinquished last weekend.

Aldershot are in 17th, and three points for them could see them climb four places – defeat, however, could see them drop even further down the standings.

Looking at the team news, Whites should remain unchanged from the blip at Halifax. That should mean Andy Rafferty continuing in goal ahead of Mitch Walker, and Ricky Modeste given the nod once again in a three-pronged attack alongside Ricky Miller and Stefan Payne.

Aldershot’s top scorer this season is Charlie Walker, who has found the net on nine occasions so far this season, four goals ahead of strike partner Richard Brodie. Whites’ top scorer in all competitions remains Stefan Payne with 11, three ahead of Ricky Miller.

The two sides met at the EBB Stadium back in August, drawing 1-1. Then, Whites stretched their unbeaten run to three games – Dover dominated the first half, and took the lead with a sublime strike from Stefan Payne. However, a goalkeeping masterclass from ex-White Phil Smith kept his side in the game, and Richard Brodie scored the equaliser before the break. The Shots had the best of the second period, but Chris Kinnear’s side had done enough to earn a point.

Last season at Crabble, Dover ran out comfortable 3-0 winners in one of their best performances of the season. Highlights from that match can be viewed here:

This match *BS*WILL*BF* be segregated.

*BS*CLASS OF 1990*BF*
The club are now able to confirm a planned running order for our ‘Class of 1990’ event happening at Crabble before and after Saturday’s match against Aldershot Town. Supporters will have the opportunity to meet their heroes and take part in Q&A sessions.

We look forward to welcoming thirteen members of the squad from our record-breaking 1989/90 season to Saturday’s game, who – between them – made over 3,000 appearances for Dover Athletic.

Our planned running order is as follows:

1.15-2.30pm
Our former players will be based around the stage area in the Centre Spot, and are keen to meet and greet supporters young and old. There will also be plenty of opportunities to take photographs with the side, and enjoy a drink with them before the action on the pitch gets underway. During this time period, the decision will also be made on which players will be presenting the replica shirt that will be presented to the draw winner after the game.

2.30-2.45pm
The Class of 1990 will make their way onto the pitch, where they will answer a number of supporter-submitted questions over our PA system.

3.45-3.55pm
At half-time, the former players will make their way onto the Crabble pitch and take part in a lap of honour.

5.00-6.00pm
After the match has finished, the former players will make their way back into the Centre Spot, where they will present their chosen player with the ‘Man of the Match’ trophy, and also present the winner of the lucky matchday magazine draw with their signed replica shirt. Depending on demand and number present, there will also be the opportunity for a more formal Q&A session, where supporters will once again be able to pose questions to the former players.

Please note, all times are subject to change and/or cancellation.