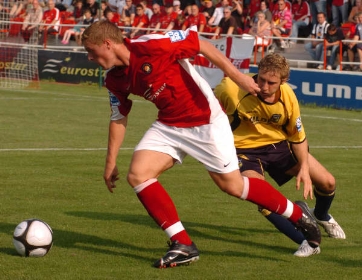 *BS*GEORGE PURCELL says it is great to be home after completing his move from York to Dover – and eyes automatic promotion this season.

*BF*Striker Purcell, 23, has had a whirlwind three days since Whites had an initial bid rejected by the Minstermen.

Then, on Friday, York accepted an improved offer and gave permission for Dover to speak to the ex-Braintree frontman.

Former Ebbsfleet ace Purcell agreed terms then quickly packed his bags, moved back home with his parents in Gravesend before meeting up with his new team-mates yesterday.

He said: “It’s wonderful to be back home. I had accomodation in York – and was able to just leave straight away.

“Martin Foyle signed me last summer from Braintree but then unfortunately I got injured.

“I went on loan to Eastbourne and then Dartford – and Gary Mills, the manager at York, was not likely to give me many games this coming season because of the way they want to play.

“Once I heard of Dover’s interest, I wanted to join. Martin Hayes is building a very good side here, one that can challenge for promotion.

“I want to be firing on all cylinders again – and feel very fit after doing a lot of running and gruelling training sessions at York.”

Purcell refuses to pledge to score as many goals as Adam Birchall but he bids to be among the league’s prolific hitmen.

He said: “I just want to score goals. That’s what I am all about – and I’m confident of getting them here at Dover Athletic. Bring on the new season!

“It helps that I know a few of the lads already. Phil Starkey is a big pal of mine – we played at Braintree together. I also know Sam Cutler really well. Some of the other lads are well known to me too.”

Boss Hayes said: “We heard George might be available – so asked York the question. They initally knocked us back – but it seemed that they were willing to let him go. If you don’t ask, you don’t get – and we’re delighted to get him.”

He added: “I don’t think we’re finished yet on recruiting. We’re looking to get in another striker and a centre-half – then we’re ready to go.”