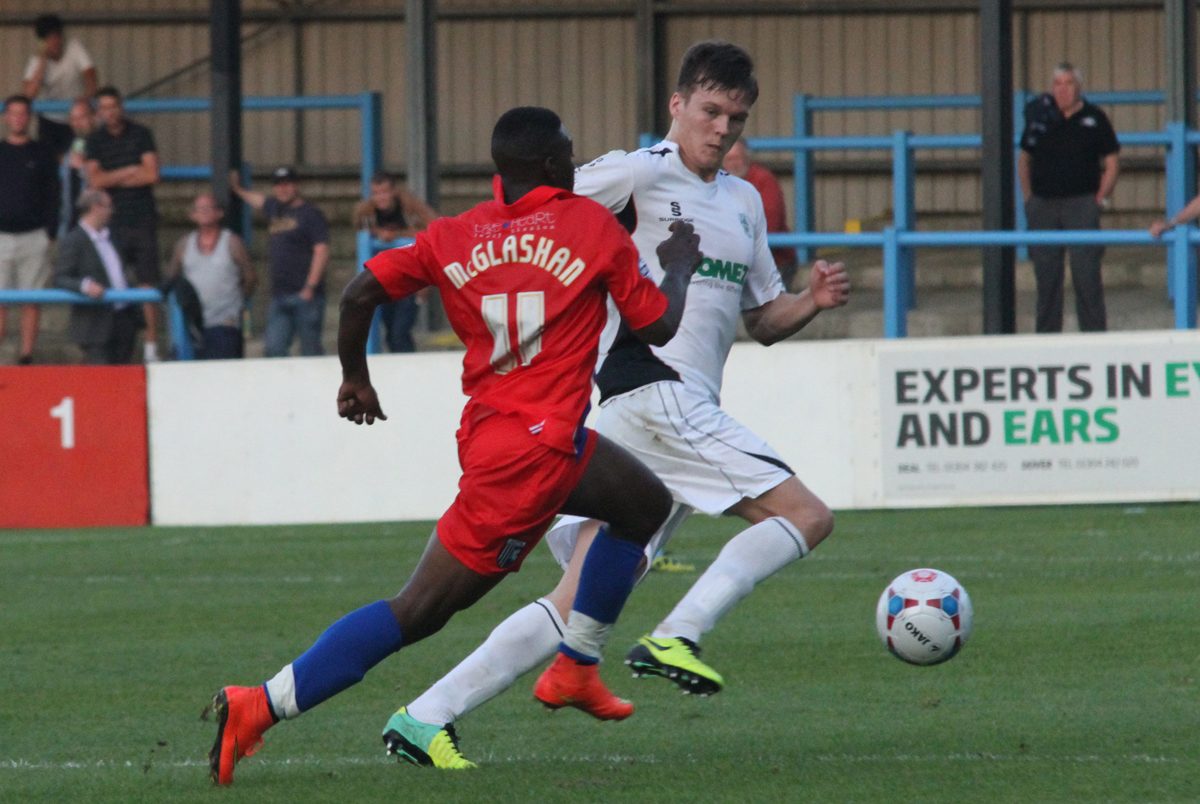 *BS*Sean Raggett speaks exclusively to Jack O’Sullivan about the pre-season campaign, the extra fitness work the side are undertaking and the impact the club’s new signings will make.*BF*

20-year-old Raggett, a product of the club’s youth academy, was born and raised in Gillingham and, expectedly, games against the Priestfield side will always have an extra bit of importance for him.

Despite Tuesday night’s fixture only being a pre-season friendly, it was played in a competitive spirit and Raggett typically gave his all during the game, putting in a man of the match performance as the hosts won 1-0. It was his second-half header that won the game for Whites, and Raggett expressed his pleasure: “I always enjoy playing against Gillingham, even in friendlies, because I’ve lived there for my whole life and supported them as a kid.

“Of course, it was a nice moment for me to get the goal that won the game, even though it was just a friendly, and I’m looking to improve my goalscoring record this season. I was disappointed to only get two last year, but I’ve been working on my attacking headers and I want to get a minimum of six this time around.”

As Sean infers, a lot of extra work has gone on during pre-season – largely down to the extra training session that the club have introduced. Six-foot-five-inch Raggett describes the change as “pleasing”, and pays tribute to the club’s fitness coach John Morris: “I think it’s so important to get more time on the training pitch, it helps the team and myself individually improve. John has done some great work and has definitely put us through our paces in pre-season.

“He has made it a bit different to what I am used to, so even though it is hard it is more enjoyable.

“You can see from our performances how well we press teams, that the side is in very good shape and the extra day training will contribute to this – credit has to go to John for helping to get us in the right shape.”

Whites’ pre-season record makes for impressive reading. With eight games played so far, the side have recorded seven wins and one draw – which came against a strong Colchester United outfit – and just three goals have been conceded. Raggett says: “I think pre-season has gone very well, the lads all look very fit and in training we’ve been able to do a lot of ball work alongside our fitness work.

“From the games we’ve played, I’ve been very pleased because we’ve played some good football. Conceding only three goals in the eight games is extremely good, especially when two of the sides we have faced are professional League One sides.

“Winning seven and drawing one shows how hard everyone has worked in pre-season, and how quickly the team has got back into the football season. It’s just about the result though – I think our performances have been exciting. We are getting the ball down a bit more than last season I think, and looking for different ways to break down teams whilst still staying solid defensively.

“Of course though, none of this will matter if we can’t take it into the season which we will look to do against Halifax.”

As mentioned, Raggett put in a stellar performance against his hometown club in the latest pre-season friendly, comfortably dealing with Gills’ first-choice strikeforce of Cody McDonald and Danny Kedwell. Handling their potential threats so well is something that Raggett feels will give his side a boost: “Playing, and keeping a clean sheet, against two top League One strikers will definitely give our defensive players massive confidence. We are confident that we won’t concede many goals, and that comes from the strikers all the way back to Mitch – we keep good shape, making it incredibly hard to teams to break us down.

“If we can limit the amount of goals we concede then we know our forwards will do the business up front and win us games.”

This season sees Whites back in the elite level of non-league football for over a decade, with the division a lot stronger than the last time the side played within it. The club’s absolute priority is likely to simply be to stay up – by whatever means possible – and although Raggett acknowledges this fact, he is adamant that the side will not just settle for finishing fifth from bottom: “When any team goes up, the main aim has to be to stay up – so of course, that will be ours.

“We absolutely won’t have the mind-set that we will be in a long relegation battle, though. All of the players and staff know we are capable of achieving a good position in the Conference Premier and surprising a lot of teams along the way – and then we can look to progress forward.

“Just look at our last two pre-season performances and results, and even the MK Dons game last season – we are capable of getting a result against anyone in that league and we won’t be scared of anyone.”

Manager Chris Kinnear has strengthened the side’s defensive options with the summer signings of Tyrone Sterling and Sean Francis, with the overall tally of new additions coming to seven.

Key players in every department have been retained from last season’s promotion-winning side, and Raggett feels this was a big requirement: “I think it was important to keep a large amount of the team from last season, and to only add players who would significantly improve what we already had – which I believe every one of the new boys has.

“We had terrific team spirit last season and the new signings have bought into that straight away. All of the signings, bar Christian Nanetti, have been with us pretty much from the start of pre-season so it seems like they’ve been here for a long time anyway.

“Even Christian, who hasn’t been with us for too long, is settling in and we can all see what an exciting player he looks.”

The club will be swapping trips to Boreham Wood and Wealdstone for clashes against Bristol Rovers and Wrexham this season, and Raggett is looking forward to facing the league’s big guns: “Obviously, the away games against Bristol Rovers and Torquay are games I’m very excited about. Both teams were in the Football League last season and will have a lot of players still probably capable of playing at that level.

“These are the teams and players you want to test yourself against, both individually and as a team.

“Also, Barnet at home will be a great one – it’s a televised game so I imagine Crabble will be absolutely rocking. What footballer doesn’t want to play a game live on TV?”

If Raggett can maintain his incredible progress, then the extra coverage and focus given to the Conference Premier could see the rumour mill start up once more.

Last season, the youngster was linked with moves to a variety of Championship and League One clubs, with scouts in attendance at a number of Whites games running the rule over the central defender. As an incredibly passionate and determined individual, it could be excused if his head turned – but Raggett assures fans this isn’t the case: “Regarding the links with other clubs, I don’t really give it much thought.

“I would love to play professional football in the League, that is my dream so it is flattering when you hear these rumours because you assume you must be doing well.

“However, right now I’m a Dover player and – just like last season – I am fully focused on the season ahead with Dover and helping us achieve the highest league position possible.”