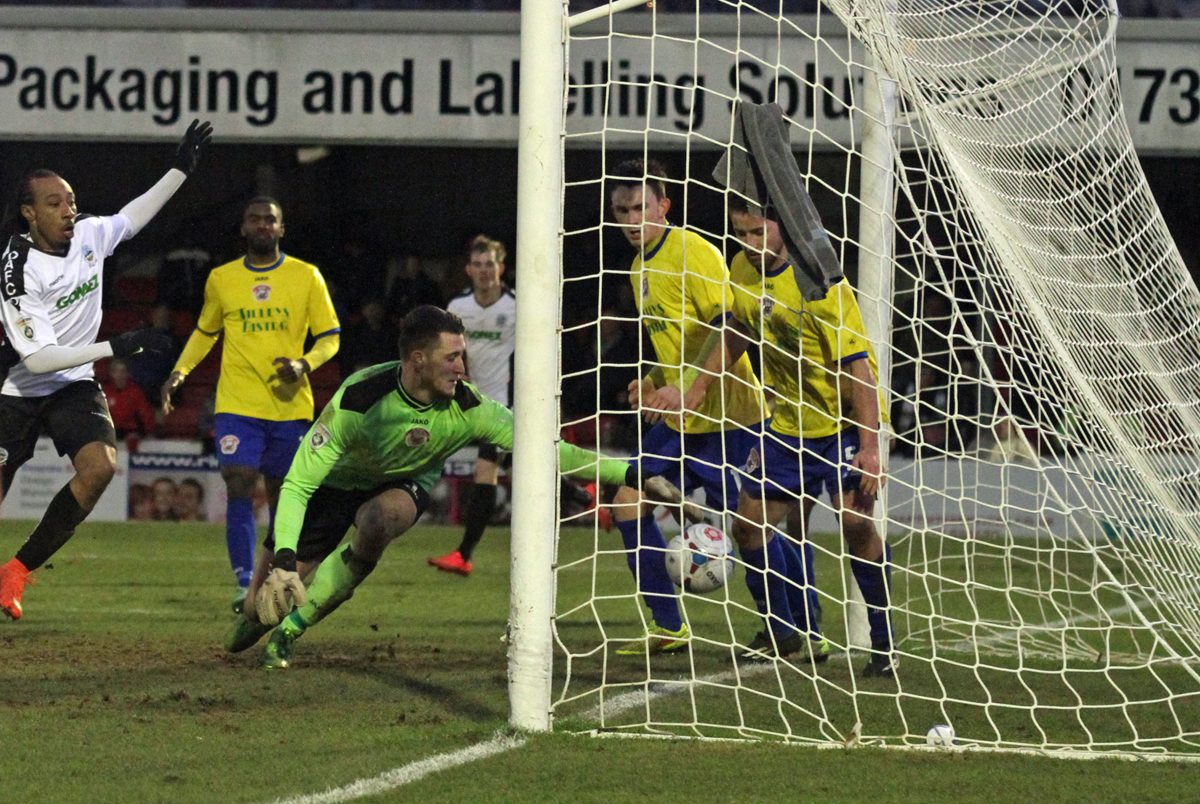 Two goals in the last five minutes helped ten man Whites stage a dramatic comeback to draw 3-3 with Bath. Stefan Payne had given Dover an early lead, but then saw red just before half time for raising his hands to Bath goalkeeper Jason Mellor. The away side turned the game on it’s head and raced into a 3-1 lead, but Richard Orlu’s strike three minutes from time and Jake Reid’s header at the death kept Whites in the hat for Monday’s draw as they face a replay on Tuesday night.

Chris Kinnear was delighted with the comeback. ‘They came here to shake us up and I knew at 3-1 down it was not going to be easy, but the character of the team is magnificent and they never know when they are beaten.’ He added, ‘we hit the bar and the post and should have won the game – but I am really proud of the players and their fitness levels are that of a full time team.’*Lpic1*

Stefan Payne will now serve a three match ban effective immediately after appearing to raise his hands to Jason Mellor after an altercation the box. Chris was clearly disappointed with his actions, but also pointed out some other factors in the game that went against his team. ‘Stefan has to learn that he cannot do things like that. To be fair he says that the goalie had him by the throat and he was trying to push him off – so their player should have gone as well. I am disappointed with how their bench acted as the four of them were at the ref all game, but the fourth official could not do anything about it. Though I do believe he is going to report them.’

Jake Reid has had his critics this season, but stepped off the bench late on to head home the equaliser. A move that Kinnear credits to his assistant. ‘Jake was on at me to get him on’ said Chris. ‘Reid had done brilliant in the last round against Havant and he told me he would score, so credit to Leberl for that one!’

The draw for the semi final takes place Monday and fans are dreaming of Wembley more than ever before, but Chris is staying on the cautious side. ‘I am sure they will be fancying themselves at their place and we are by no means in the semi finals. We fancy ourselves though away from home though.’*Q2*

He added ‘Maybe it is fate that we win the Trophy and we played with ten men against Lowestoft. But you cannot rely on fate, you really have to rely on hard work and that is was the lads will be prepared for on Tuesday!’

Soloman Taiwo should be fit to return after pulling out of the warm up ahead of today’s game, but Whites will be without Liam Bellamy, Sean Francis, Stefan Payne, Adam Mekki and Dan Holman on Tuesday night as the squad continues to be stretched. ‘I may have to look into whether I can get anyone back from loan, but that is something I will think about tomorrow.’*Lpic2*