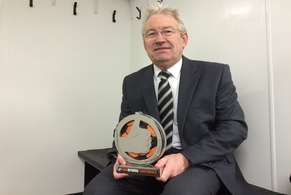 A late header from midfielder Nicky Deverdics made it six points in 4 days for Whites, and appreciative of a below par performance, he heaped praise on his players after they cancelled out Altrincham’s equalizer moments earlier. ‘Points are points’ he beamed. ‘At 1-1 and not playing great, the lads could have laid down, but as I have said all along our players have got some character and they gave 100%.’ He added ‘Altrincham have got some old strong players there and as a club they have won this league a few times.’

Two victories on the spin have put Whites back on track after a seven game winless run. ‘Let’s not get carried away that we lost a few games. At the end of the day we are tenth in the league and the third highest scorers, so we can all be positive. We are really dangerous going forward and teams have got to be wary of us. When we have lost it has always been a close game.’*Q1*

Chris was also pleased for the supporters as they were able to celebrate a home victory once again. ‘We have done much better at home this season than previous. The supporters did not get on their backs at 1-1, wheras previously players would have got a bit of stick and maybe lost it. The fans stayed with them and the players do appreciate it.’

Whites face a number of teams battling for promotion in the run in, a great test for the team as they continue to improve, according to the experienced boss. ‘If that is the standard to get into the play offs, then we are going to learn a lot in those games, regardless of the results. We have been showing great progression for the last two years we are now learning for next year.’*Lpic1*

With progression in mind, contract offers are out early as Chris looks to avoid second season syndrome, a fate suffered by other Kent clubs recently. ‘I think sorting out player futures early is why we could do better than most sides in the second season because they lost their better players and struggled. We really want to continue going from strength to strength.’

Next up for Athletic is the second of four consecutive home games as they face Gateshead, who will be looking to avenge their 2-1 loss to Dover earlier in the campaign.