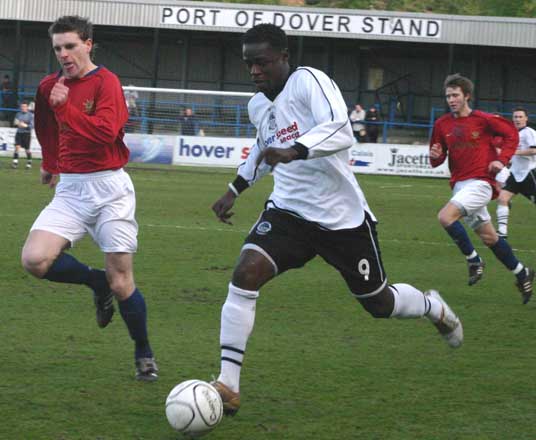 VICTOR RENNER has a hot tip for the shrewd punter among Whites fans – get your money on him to score at Wealdstone on Saturday.

The hard-working frontman has not hit the onion bag since his superb double strike against Salisbury on February 12.

Yet, despite that, Victor has put in a number of good performances and been dubbed one of the club’s unluckiest strikers.

He seems to have a love affair with the woodwork. Whites fans have lost count of the number of times the popular Londoner has seen a shot strike a post or cannon back off the crossbar.

Victor said: “I’m thinking about asking the FA to award us a goal for every three times I hit the woodwork. I’ve not had much luck, have I?

“But I am due a goal and reckon Dover fans should get themselves down the bookies before the Wealdstone game on Saturday and have a punt on me scoring.

“I’ve got to be worth a few quid, surely? The law of averages say that one of my shots will go in sooner rather than later.

“But, seriously, one of my biggest problems is spending too much time out of the penalty box. Next season I want to be more of a Gary Lineker-type striker – being in the box to poach goals.

“I don’t have a problem playing out on the wing, because I feel I can create chances for the other lads, but, as a striker, you want to score goals. So that’s something I’d like to work on.”

Victor was brought in by former boss Steve Browne in October. While other players, such as Dean Palmer and Jude Stirling departed after Browne’s departure, the ex-Wimbledon marksman has stayed loyal to the club.

He may have scored just three goals this season but there is no doubt that he has played a key role for the team – especially since Clive Walker’s return in January.

The Whites ace was naturally gutted after the 3-2 defeat at Tonbridge, which confirmed our relegation to Ryman One, and on reflection believes had Clive taken charge a month or two earlier the club would have stayed up with little trouble.

He said: “Clive came in a bit too late to save us. Had he been in charge from the summer, I’m 100 per cent convinced we’d be fighting for promotion, not against relegation.

“Clive is my kind of manager – he’s real old school and you don’t get bosses like him in football anymore.

“I like his style of management, I like the way he does things. He’s one of those managers, if you’re not doing things right, he’ll sit you down and go through it with you.

“Not many managers at this level do that. It’s probably because other managers’ managerial skills are not up to such a high standard or have Clive’s experience to be able to tell you what to do.

“It’s nice when you get someone who appreciates you as a player or person, sits you down and helps. I’ve learned a few things from Clive. You can enjoy yourself and express yourself more with him in charge.

“He always tell us it’s important never to put up the white flag. It doesn’t matter how badly you’re playing, don’t give up. Keep working hard. If you give 100 per cent, and your best isn’t good enough, at least you can walk off the pitch with your head held high.”

Whites certainly made a fight of it and most pundits agree that to have taken the relegation scrap to the final couple of weeks was one hell of an achievement, given their hopeless-looking situation in the New Year.

Victor said: “All that hard work has ended up being in vein. It’s such a great shame. We ultimately left is so late, meaning we were relying on other teams. So had we won at Tonbridge, we’d have still been in a desperate position this weekend. Most of the other boys are gutted – because we were so close to making it.

“Personally, I’m disappointed because it’s the first time I’ve ever been relegated at any club.”

The Dover striker admits that the side have frozen in big games this season – especially against Folkestone at Easter time and during the first half at Tonbridge. Both Clive and chairman Jim Parmenter have admitted that the side perhaps lacked a bit of experience to deal with big-match pressure.

Although Victor agrees with that, he insisted that the young players in the side have been a revelation – even inspiring the more experienced members of the team.

Victor said: “You’ve got older experienced ex-League players in this division but they just turn up for the money. The kids we have at Dover, like Sam Vallance and Shane Hamshare, are going to give you 100 per cent. Big-name players, because of their reputation, are just after the pay cheque.

“But the young lads want to impress. I don’t think I’ve seen a single Dover kid pull out of a tackle and that inspires me. It lifts the team.”

And that is something that Victor knows impresses the Whites faithful. One thing that the striker has learned during his spell at the club is that supporters appreciate hard work.

He said: “When we lost on Saturday and walked off the pitch, we got a standing ovation and the Dover fans were singing. It was unreal. Despite the sinking feeling of getting relegated, all the fans stuck with us.

“They appreciated the work we’d put in. It just wasn’t enough on Saturday. We froze in the first half to be honest.

“I’ve enjoyed a good rapport with the fans here. They really are amazing. I’ve never met a group of supporters like them. As long as you give them 100 per cent, they appreciate it. And when you know they appreciate you, it makes you want to go out there and do the business for them.”

Victor has been offered a one-year deal at the Hoverspeed Stadium and is currently thinking it over. He wants to stay for next season and has no problem stepping down to Division One. He admits that he is discussing personal terms. Although he is happy with the offer, Victor needs to discuss his travel arrangements.

The hitman works in the retail trade and lives in Walthamstow, East London. Midweek training starts at 7.30pm and Victor finishes work at around 6pm, giving him 90 minutes to get out of London and down the M2 to Dover.

He said: “I’ve spoken to Clive about the contract for the past month. The situation with me is that I come from East London. Clive is understanding.

“I may change my job soon, which may make things easier. It’s not really too much of a problem because Clive has been great. He doesn’t mind if I’m late for training and has even given me a couple of nights off. But I feel a bit guilty as I like to get down 20 minutes before training so I can relax before the sessions.

“The offer I’ve received from Dover is a good one and I’ve no problems with money. I just want to come to an arrangement about my travelling because I have to pay a bit for petrol to get down. But the club do understand this and we’re talking about it.

“I’d like to stress to the fans that I definitely want to be here next season.

“Everyone thought I was going to leave when Browney left. But I really enjoy playing for Dover. It’s a big club. I get on with all the boys and the atmosphere is good. I’ve never seen anything like it to be honest. I’d love to be part of Dover’s future succcess because I can see us going on to big things. Everything is in place now.”

Finally, Victor can shed some light on the penalty re-take incident deep into injury-time at Tonbridge.

He said: “I thought it was a poor decision myself. The penalty was justified because Nicky (Humphrey) made contact with their player – we’ve no complaints about that.

“Their guy has smashed the ball over the bar and was not distracted so I don’t think the decision was right.

“These decisions happen sometimes and one cannot dwell on it too much. Let’s just hope we get the rub of the green with future refereeing decisions.”