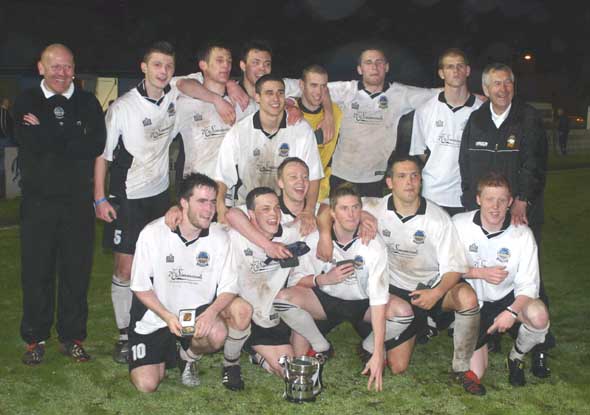 THIS season for myself will be one to remember for a number of reasons.

And throughout it all, I have to give the reserve team players great credit for their commitment and desire in playing for Dover Athletic, which at times has been extremely difficult.

However, with the club in safe hands at the helm from now on, players should have no worries other than concentrating on playing football.

I would also like to thank those first team players who have played for the reserves so far this season and for their attitude when selected, as they have not in anyway taken the matches and training less seriously. They have all showed great enthusiasm.

Bill Friend and myself are lucky to have a talented bunch of youngsters who have bonded extremely well together.

Team spirit and morale is high with players from North Kent and the local lads displaying a togetherness as demonstrated at our Christmas night out in Ashford (Don’t worry lads what goes on tour stays on tour).

The reserve team is there to support the first team in all matters. We are there should first team players require matches on returning from injury or suspension, along with giving first team players who have been substitutes a full 90 minutes to keep them match fit.

This has been demonstrated recently with Tom Hickman, James Rogers and James Gregory being needed for first-team duty. We also give matches to trialists, currently Walid Matata and Pierre Lisbie have represented the reserves and both players have done very well – and are now involved in the first team’s training sessions.

Behind the scenes both Gary Finnis and myself are planning to introduce more exposure to reserve team football for the current Under 18s, a number of them will be selected to attend reserve team training sessions and travel and have some involvement on match days. This commenced last week, with the inclusion of Jordan Pettman against Tooting and Mitcham, and the recent training session which I took combining the reserves and U18s.

Garry later informed me the U18s enjoyed themselves and learned a lot – in particular the fitness and physical side of what it takes. This can only help their development and benefit the first team in the long run.

The current crop of reserve team players are on average 20-21 years old with the exception of Grant Bagley (18) and Jason White (19). A number of the players you will be familiar with are Lee Scott, Kevin Lott, Rob Smidmore, Micky Lane, James Farrier, Laurence Ball and Dave Clifford – who made first team appearances earlier in the season under difficult circumstances.

However, these players continue to develop and, as long as they learn by their mistakes and show desire to improve, should become quality players in their own right and push for first
team selection within a year or 18 months. It’s up to them

Due to recent departures from the first team squad and selection of reserve team players, I was left with no option but to bring in new players to bolster the squad – as unfortunately a number of the U18s are not ready and have commitments on Sundays with their own matches.

I will not sign players to simply give them a game and help us out. The players who have come to the club recently are George Fenwick (20), who I have known personally for three years and been tracking since his return from America from a football scholarship. George has tremendous ability and comes from a footballing family as his father is ex-England international Terry Fenwick. George is a little ring-rusty but has produced reasonable performances in his first two appeararances. We will monitor his progress.

Steve Wade (20), who I have known for two to three years, has signed from Ashford Town. Steve is a tough tackling no-nonsense player. Again, as with George and other reserve team players, their progress and development will be monitored.

The reserves remain in a good position in the league to gain promotion to the Premier Division However, certain individual performances, a lack of concentration, poor defending and missed chances, as displayed against Tooting last weekend, will jeopardise our hard work to date and make promotion impossible.

I am looking for a positive response this weekend away to Erith & Belvedere in the quarter final of the Kent Intermediate Cup.

I hope this brief summary gives you all a understanding of events in which we are all focused on developing players, who will one day pull on a first-team shirt and wear it with pride.