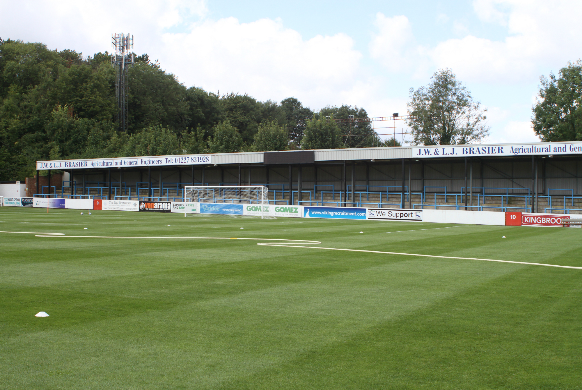 *BS*This Saturday, Dover Athletic take on Forest Green Rovers at Crabble in the last game of the regular season – despite already confirming their top-five spot, Whites will be keen to finish with a win going into the playoffs.*BF*

The side’s 1-1 draw at Kidderminster Harriers – which extended their excellent run of form – confirmed their participation into the end-of-season playoffs, but there’s still a lot riding on this weekend’s match against second-placed Forest Green Rovers.

A positive result for Chris Kinnear’s men could see them finish the season as high as third place, which would mean the second leg of our playoff semi-final would be at Crabble – and what an occasion that would be!

Below, we have outlined some important information which supporters should familiarise themselves with ahead of Saturday’s big match – we are aware that not all supporters have internet access, so your help in communicating these points to all supporters would be gratefully received.

*BS*PRE-MATCH*BF*
All Vanarama National League matches this weekend – including our game – will kick-off at the later time of 5.30pm. Gates at Crabble will open at 2.30pm on Saturday, and supporters are encouraged to arrive early – we are expecting a big crowd for this fixture to celebrate the side’s achievements, so be sure to get to Crabble in plenty of time to enjoy the pre-match atmosphere and avoid queues both at the turnstiles and the bar.

This match will *IS*NOT*IF* be segregated.

*BS*POST-MATCH*BF*
After the game, we welcome all supporters to make their way to the Centre Spot. We will be holding our annual End of Season Awards evening, which is scheduled to take place between 8pm and 9pm, giving fans the chance to congratulate the squad and management team on this season’s efforts – plus see who has won the five awards up for grabs. We will be presenting awards for Club Person of the Year, Players’ Player of the Season, Golden Boot, and the two awards voted for by you, by the supporters – Goal of the Season and Supporters’ Player of the Season. The bar will remain open for refreshments to be purchased.

As a club, we are continuing along a very exciting and historic path – and every supporter has their part to play over the coming weeks.

We thank you for your support thus far this season and look forward to Crabble rocking over the next two home games!