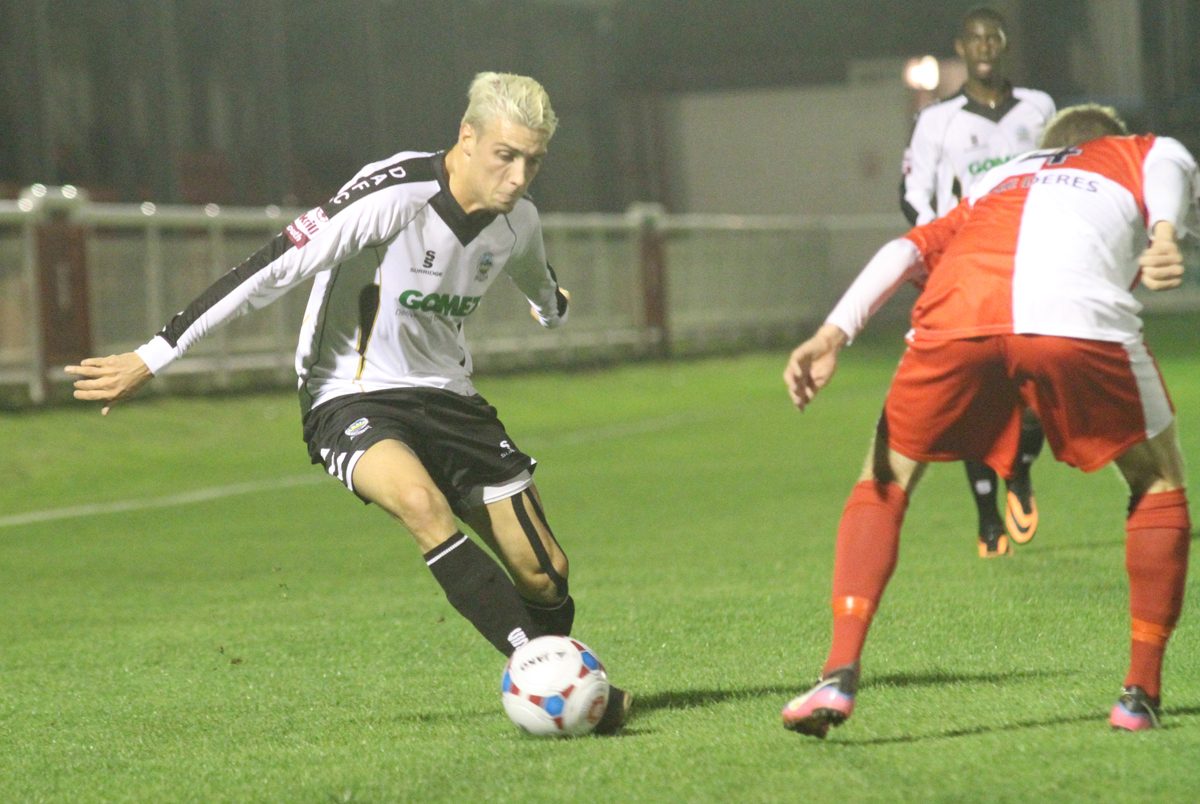 Midfielder Liam Bellamy spoke to Doverathletic.com after his strike started a four-goal blitz as ten-man Whites took apart a hapless Chelmsford at the Melbourne Stadium on Saturday.

Bellamy opened the scoring just before half time, 15 minutes after on-loan midfielder Tom Sawyer had received his marching orders for a rash tackle, before a Tom Murphy second half brace and a late Michael Bakare penalty completed the rout.

‘We were excellent’ said the player, signed from Ebbsfleet in the summer. ‘We actually played better with 10 men than we did with 11!’ He also gave special praise to man of the match Murphy ‘He really can run and is always in fifth gear – His finishing was brilliant!’

Any suggestions that it was Chelmsford defender Goulding with the final touch to give Dover the lead were quickly quashed by Liam. ‘There was a bit of a fumble, but I just got there in the end. It was definitely my goal and I’m not just saying it!’

It appears that a rallying cry at half time from in-form Nathan Elder inspired the team to a second half annihilation of their opponents. ‘I was really sceptical at half time, but Nathan got us all together and reminded us of the quality we all have and that we were all in this together.’*Lpic1*

He added ‘Chelmsford may not be doing well at the moment, but I know some of them and they are good players. We really showed there is not much weakness in this team and you only have to look at the players not even making the bench to see the quality we have!’

Though whites are sitting in 12th currently, Bellamy is still confident of promotion, especially as they are only four points from fourth place in the table. ‘It’s a very tight league and there is not much in it at the moment. A couple more wins will really boost us.’

An injury in pre season has meant the talented midfielder has endured a frustrating start to his Dover career, but with more pitch time under his belt, having started 3 of the last 4 matches, he admitted to being a much happier camper. ‘Hopefully I can carry on playing as I am fully recovered from my injury now. I just want to show I am worth my spot on the pitch.’*Q1*

Athletic are back in cup action again with a Trophy trip to East Thurrock of the Ryman Premier as look they continue their 100% cup win rate so far this season. ‘We will have to be on our game on Saturday’ said Liam. ‘The club want to win the trophy and I think we can win it too – the cup runs so far have been great for everyone involved with the club!.’