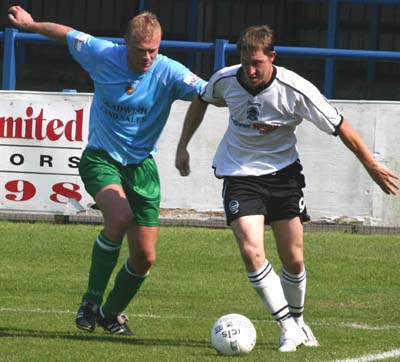 *BS*SHAUN WELFORD has returned to Dover Athletic – and boss Andy Hessenthaler has named him in the squad to face Met Police at Crabble.

*BF*The striker has rejoined the club after three years at Ramsgate, where he has top scored every season.

Reserve-team defender Laurence Ball goes in the opposite direction on-loan until next summer.

Hess said: “I’ve only seen Shaun play once – but have spoken to a lot of people about him, and everything I hear is positive.

“He gives us something different up front and he has top-scored at Ramsgate for the past few seasons – and they’re playing a level up.

“With the chances we’re creating, hopefully it will work out perfectly with Shaun putting them away for us because, without doubt, that’s an area we’ve been struggling with.

“Tim Dixon has been watching him for us, as he’s been going to lots of games on scouting missions, and Clokey is big mates with Shuan.

“I’ve been told that Shaun will run through a brickwall for the team’s cause and is not afraid to put his head in where it might hurt.

“That’s exactly the type of character we need at this club and I’m hoping this is going to work well for everyone.

“Shaun and I had a long chat this morning and he’s thrilled to be coming back to the club.

“I’m certainly quite excited by the prospect of him bagging the goals. I don’t want to put pressure on the lad but one person told me, ‘he’ll win the league for you’.

“But I am not expecting him to ‘win the league for us’ as that will be a collective effort from the team across the park – and our aim is to continue creating chances for the strikers to put away.

“Shaun won’t start against Met Police but he will definitely be involved. It’s going to be a very hard match for us tonight. We’ve had them watched a few times now and they’re a very tough side.

“I’m well aware we’ve lost at home to them the last two seasons. Hopefully, we can reverse that tonight.”