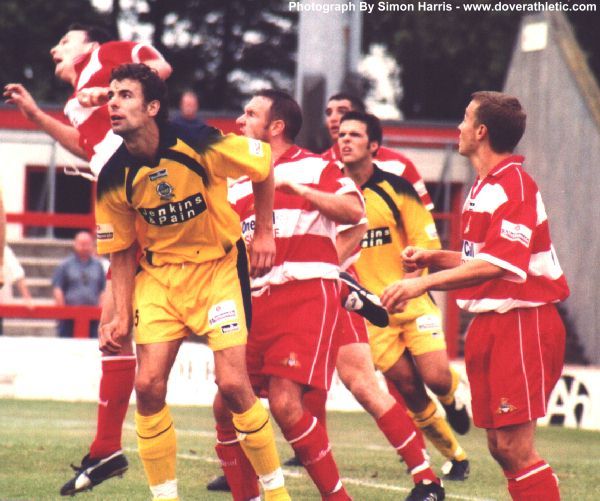 LEE SHEARER wants to stay at Dover and help get the club back into the Conference.

River End hero Shearer, 27, spent two seasons away from Dover Athletic and admits Margate and Gravesend just do not match up to the warmness of playing at the Hoverspeed Stadium, which he calls his second home.

The central defender – signed by former boss Bill Williams from Leyton Orient – is hoping to extend his loan from Gravesend when the current month expires and wants to sign for Whites permanently.

And he admitted: “It’s like I’ve never been away. I am a Dover fan anyway and even when I was playing for Margate and Gravesend I’d be up here singing and cheering with the Dover fans if I didn’t have a game.”

It is said that Shearer once joined in with the chant of “We hate Margate” while he was still a player for our rivals up the coast.

Shearer, who was selected for the England Semi-Pro side during his first spell at the club, said: “I got a lot of stick when I signed for Margate. It was like signing for the enemy but I was always a Dover fan. A lot of stuff was happening at the club at the time.

“Without dragging all the past up again, a lot of the lads were upset that season we went down. Gary Bellamy brought a load of players in who were earning much more than those of us who had been around for a few years. It caused splits in the dressing room and the atmosphere wasn’t the best.

“But I’ve always got on with the Dover fans. After all, I am one of them and Dover should be in the Conference. It shouldn’t be sitting second from bottom in the Ryman League – two divisions below where it was when I first played here.

“That’s why I jumped at the chance to come back when it was offered to me.”

Shearer was even in the Gravesend first-team a couple of days before he signed for Whites and a large section of the Fleet crowd cannot believe they have allowed him to leave.

But Shearer admitted: “I didn’t know this was going to happen either. I was in their team and suddenly Andy Ford, the manager there, told me I was going out on loan. And I asked where. He told me they had received a call from Dover and immediately I was interested.

“I got talking to Steve Browne and really liked him. He reminded me that he played against me for Yeovil when we beat them 4-0. We had a bit of a laugh about it and he then told me of his plans for Dover. And I want to help.

“Everything about Dover is a Conference club and I’d love nothing more than to play for this club again in that division. I always said I’d come back to play for Dover one day and here I am.”

Shearer admits that although it is the same old faces on the terraces that are cheering him, the playing personnel have completely changed.

He said: “Only Matt Carruthers and Paul Hyde are left from when I was here. But the lads we’ve got in the team are quality players and no way are we going to end in those bottom four positions with this team. We just need to start scoring goals because apart from that we look solid.”