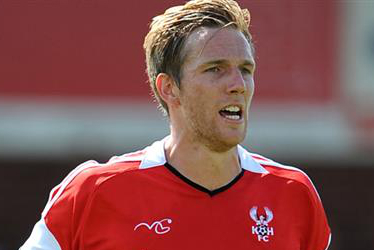 *BS*The club have moved quickly to secure their first target ahead of the 2015/16 season, with highly-rated central defender Jamie Grimes joining the club from Kidderminster Harriers.*BF*

24-year-old Grimes came through the ranks at Premier League side Swansea City before joining Harriers in March 2013 – initially on a short-term deal.

He impressed sufficiently to be offered a year-long deal last summer, and was a near ever-present this season in their side. He made 41 appearances for the side, who finished 16th in the Vanarama Conference table this season.

Grimes was offered a deal to stay at Aggborough by boss Gary Whild for the 2015/16 season but has instead chosen to join Chris Kinnear’s ranks at Crabble as the side look to build on the successful season that saw the club end in 8th place in our first season back in the Vanarama Conference table.