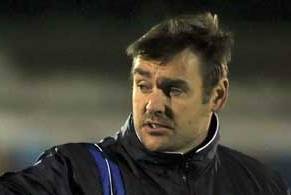 *BS*Steve Brown discusses his playing days at Charlton and Reading, which included competing against the likes of Wayne Rooney and Thierry Henry:*BF*

If there’s one person that doesn’t need reminding about the fickle nature of football it’s Whites’ assistant coach Steve Brown.

After battling to secure an apprenticeship at Charlton he made good progress and after two years of hard graft he was rewarded with his first ever professional contract.

Brown was seemingly on the crest of a wave, but almost as soon as he had signed on the dotted line he was brought crashing down to reality as he suffered a career threatening injury.

Steve recalled, “I actually snapped my cruciate ligament. I mean this is a serious injury today and you’d still expect to spend the majority of the season recovering, but back then I was looking at a 16 month lay off”.

Faced with yet another mountain to climb Steve had to seriously consider that he would never reach full fitness again and even started to put together plans for other careers outside football.

Despite seemingly being pushed back to square one, Brown decided that he wasn’t going to throw in the towel just yet and put his all behind getting back out on the pitch again. He described his time spent in rehabilitation as ‘the dark old days’, a frustrating and isolated regime of being driven from specialist to specialist not even getting anywhere near the football club or his team mates for months at a time.

Yet again Steve was able to keep motivated in dark times, “the experience of being rejected in my early career and my initial struggles at Charlton just made me more determined to prove I was good enough, those set backs hadn’t beaten me and I was not going to let anything else get in the way”.

This attitude served Steve well as he was able to bounce back with full effect and unbelievably was knocking on the door of the first team only a short time after recovering from injury.

From this point he never looked back, he spent 12 years in the first team at the Valley, making 242 appearances (ending four of these in goal!) and scoring nine times.

Brown admits that his early injuries did mean his performances on the pitch did lack a certain degree of pace but he did his best to counter that with aggression and strength along with a keen ability to read the game well, “I didn’t have speed to rely on to get myself out of trouble so I just made sure that I never got into trouble in the first place!”

Of course there were a number of moments that stood out in Steve’s time in a Charlton shirt, namely the epic play off final in 1998 which saw Charlton slug it out with Sunderland at Wembley.

*Ppic1*The dramatic game saw the sides finish level at 4-4 with a signature crunching tackle from Steve starting the move that saw his sides last gasp equaliser find the net. A nail biting penalty shoot out ensued with Brown bravely stepping up and converting from the spot. The Addicks eventually won through 7-6 on the day reaching the top flight of English football after an eight year absence.

Another favourable time that Steve looks back on was the 2000 season in which Charlton were crowned champions of Division One and gained access to the Premier League once more. Steve captained the side on a number of occasions during the campaign and saw a number of club records broken.

In total he spent four seasons in the Premier League plying his trade against some of the best attacking players in the world. He personally faced up against the likes of Alan Shearer, Wayne Rooney and Steven Gerrard to name but a few.

However he still insists that the toughest opponent he has ever had to deal with was Arsenal’s Thierry Henry, maintaining that at his peak the Frenchman was ‘completely unplayable’.

“I can remember we went over to Arsenal and he could have wrapped the game up inside the first half an hour, I think the only thing that stopped him from scoring at least five was that he tried to walk the ball into the back of the net every time. You couldn’t mark him because he simply wasn’t there to be marked”.

But for Steve his time at Charlton was not forged by the stand out moments, in fact he spent such a long time there because he simply enjoyed the everyday experiences of being at the club.

“The team spirit was great between the boys, we’d all progressed through the ranks together and we were a very tight knit group. During my time at the club I think we had five testimonials which I think is pretty unheard of”.

Towards the end of his time at Charlton Brown was spending more and more time on the fringes of the starting line-up and was starting to miss playing on a regular basis. Ex Charlton team mate Alan Pardew, who had taken the reigns at Championship side Reading, made it clear that they were keen to bring Steve on board and Charlton boss Curbishley agreed to let him go.

Steve had mixed emotions about the move but knew deep down it was the correct decision, “I thought they let me go a little early but it was a no brainer really, I had to go where there was the offer of playing football regularly”.

Despite moving to a new club Steve found himself on very familiar territory, “going to Reading was just like mirroring my early days at Charlton, they were a newly promoted side on the up with a brand new stadium and plenty to prove”.

Continuing in this spirit Steve made 40 appearances for the Royals over two years before injury again reared its ugly head. This time it was clear that he wouldn’t be able to carry on playing and a shocked Brown was left with no immediate options wondering which direction his future career would take.