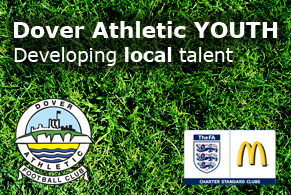 The Under 15s take on Maidstone United in the Kent Cup semi final, having beaten a highly-rated Bromley side in the quarter finals.

The match will be given the feel of a first-team game by supporters, staff and volunteers. It will be a unique experience for the young players, which will hopefully stand them in good stead for a long future here.

Dover Athletic’s board of directors have given the Under 15s use of Perrys Crabble, subject to a pitch inspection following the first-team’s home match against Welling United the day before.

Under 15s manager Will Graham, formerly a Dover Athletic player, is hoping to see a good crowd to cheer on his young team to further success.

Will said: “The boys have beaten the best team in the whole of southern England to reach the semi final. It would make my year and these kids best moment in their young footballing career if we could get the Dover supporters there in numbers.

“I’m delighted that the drummers and singers are coming to add a first-team atmosphere to the game, plus the tannoy announcer.
*Q1*
“I would love to create a first team effect for these kids to reward them for their fantastic efforts this season. I know what a great feeling it is to walk out at Crabble and can’t wait for them to experience that too.”

The Centre Spot bar and refreshments kiosk will be open for all spectators.

*IS*Please note: The only spectator access will be at the River End and along the near side of the ground to include the family stand. The Port of Dover End and Main Stand will be closed. This allows us to manage the ground easier and reduce the amount of clearing up to do after the game.*IF*

The team has also been nominated for the Kent Youth Team of the Year award by Kent Regional Newspapers.

Will Graham praised the efforts of his players and the club: “Well done to all the boys for maintaining the club’s high standards and showing everybody that DAFC is the best place to play football.”

DAFC Youth co-ordinator Brian Butcher said: “Please come and support this game, the Under 15s are a talented side and it will give you an insight into the younger talent we do have locally.

“If it’s a success we hope to hold further matches at Crabble in the future involving all of our Dover Athletic Youth teams.”