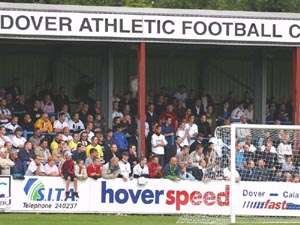 *BS*Book your seat on the Supporters Club coach to Braintree on Tuesday 12 August for Dover’s first away game back in the Conference National.

All coaches are covered by insurance, if the game gets called off you get a refund.
(Supporters Club Members only)

*IS*All vehicles are NON SMOKING
No alcohol will be permitted on our vehicles at any time (which means not just drinking alcohol but also taking it on the coach).
Any damage caused will be charged to the Supporters Club.
Any abnormal or excessive cleaning will result in a £50 fine payable by the Supporters Club.
No excessively rowdy behavior will be tolerated.

The Coach company runs a ZERO TOLERANCE POLICY if any of the above restrictions are breached and any individual found to be flaunting the rules, they will be removed from the coach immediately, irrespective of the location of the vehicle.

It is obviously in everyone’s interest and to encourage people who are understandably wary about using the coach, that behavior is kept within the bounds of common sense.