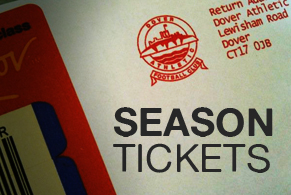 *BS*Dover Athletic have announced their pricing structure for the 2012-13 season. The club have listened to the concerns and feedback from supporters and hope that the new pricing structure goes some way in addressing many of the issues. *BF*

The scheme is set to cost the football club over £10,000 to put in place as a result of the direct loss in income from receipts, but it is hoped this will be balanced by an increase in attendances.

The changes to our matchday pricing reflects a general consensus amongst supporters, the board and the wider community, that the club need to be encouraging a new generation of supporters along to Crabble.

+ We will be freezing prices for Adults and Over 60s at £12 and £9 respectively.
+ We will be lowering the price for Under 18’s to £5.
+ In the biggest pricing change at the club in years, we will be making entry for under 11s FREE when accompanied by a paying adult*IS* (on the day or season ticket holder – up to a maximum of four children per adult).*IF*

There will be no change to seating prices for those paying on the day.

We’ll be freezing both our early-bird discount and late purchase prices at last years rates. More over we’re including seating for all season ticket holders, to add extra value to your ticket. Under 11’s are now free, so to replace the 11-16 season ticket we’ll now offer an under 18’s season ticket.

+ £10 off pre-ordered replica shirt.
+ 2 X Free tickets to bring a friend to a home league game of your choice.(worth upto £24)
+ Access to all pre-season games included.
+ First option on Cup tickets.
+ Entry into prize draw for Signed replica shirt.