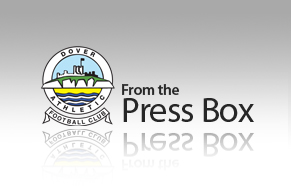 *BS*TIMMY DIXON is to take charge of the club’s reserve-team set-up after Gary Whittle stood down as manager last night.

*BF*Gary, who has done an excellent job with our second-string, remains at Perrys Crabble in a scouting capacity.

First-team boss Andy Hessenthaler said: “I want to place on record my thanks to Gary, who has done an excellent job with the reserves. He has been a much-valued member of staff at Dover Athletic and will remain so in a scouting capacity.

“He will be watching games for us, compiling reports and helping us prepare ourselves as best we can for upcoming opponents. I know he will continue to work hard for Dover Athletic.”

Tim, a legendary figure at the club from his playing days in the Chris Kinnear-era that dominated Southern League football in the late 80s and early 90s, will work alongside Darren Beale, who was Gary’s assistant and is highly thought of by the management team at Crabble.

Hess said: “The reserve side is going to be effectively an under-21s side – and this level of football is going to help the progress of our talented young players who want to step up to first-team football.

“The job of our reserve section is to provide us with a production line of first-team players – and I’ve been very impressed with how the youth section of the club has been run. We have a very strong managerial line-up that is going to help develop our kids.”

Timmy told doverathletic.com: “The gaffer has been highly impressed with some of our younger players, the set-up of the youth team and the professionalism and attitude shown by the coaching staff and the youngsters. We want to try and give the kids a much better chance of making it to first-team level.

“And we’re always actively seeking fresh talent, who will be given every opportunity at Dover Athletic.”