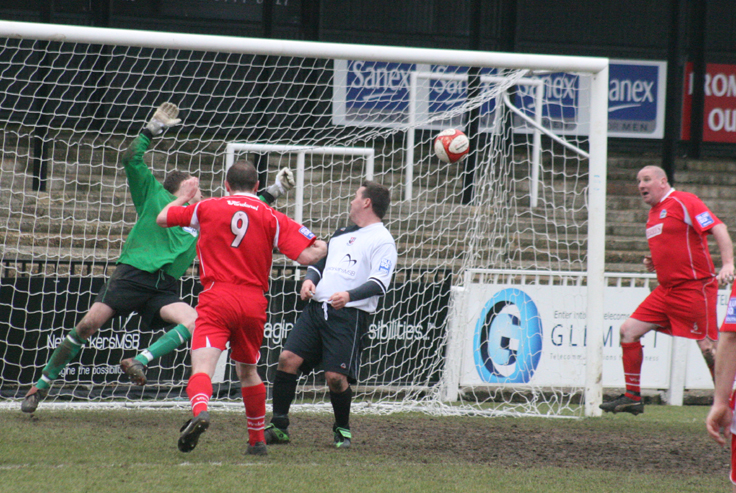 Goals from Steve Cuggy and Paul Chambers sealed a comprehensive win, as Dover fans got the chance to watch some of their heroes play for the club again.

Bromley looked a good side to start, being fit and well-organised and passing the ball about well, but Dover took the lead on 23 minutes when Steve Cuggy lashed a penalty in off the crossbar.

Five minutes later Tim Dixon crossed for Paul Chambers to score with a glancing header. Ten minutes into the second half an intended clearance hit Chambers in the belly and rebounded into the goal for number three.

Bromley put Dover under considerable pressure in the second half (40 minutes each way), and they pulled a goal back when Tony Dolby scored a penalty.

*Lpic1*Dover missed some good chances on the break; Chambers was unlucky with a 20-yard volley that dipped inches over the bar. Andy Hessenthaler was sandwiched as he was running through with only their ‘keeper to beat, but the referee only gave a free kick.

The fourth goal came three minutes from the end when Hessenthaler crossed for Cuggy to head in off a post.

Dover played well and were deserved winners against a Bromley side that had won the Isthmian Veterans Cup the last two seasons.

The draw for the semi-finals is yet to be made.