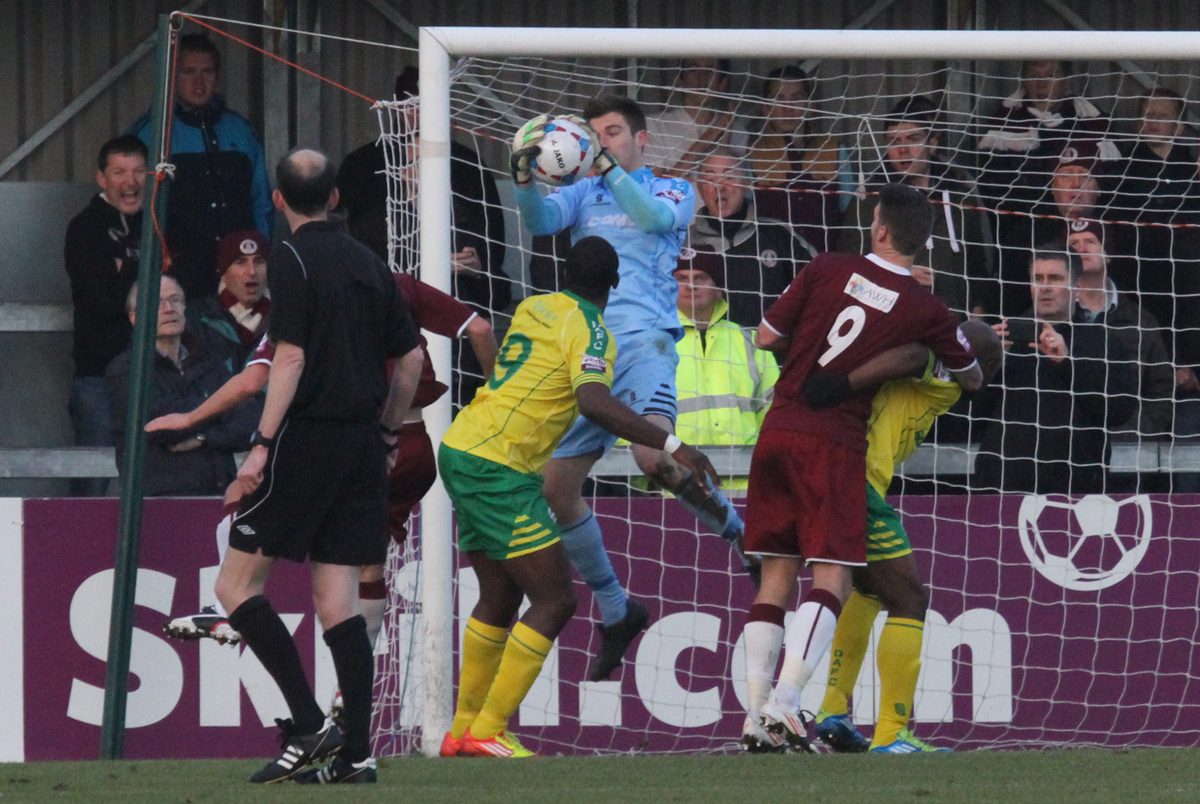 *BS*Whites recorded a comfortable victory over Dorchester Town on Saturday, which lifted the side into seventh place in the Skrill South table – just two points from a playoff place.*BF*

Despite Town being rooted to the bottom of the league, goalkeeper Mitch Walker says that the game was approached in the same way as any other: “Sometimes, the matches against sides down the bottom are the toughest.

“You’re expected to go there and win comfortably, so if you slip up then questions are asked. Before the game, the gaffer told us about their recent form at home which has been good – they only lost 2-1 to Eastleigh, and before that they were unbeaten in three at home. It’s important to keep focus during these games as if you go into it expecting it to be easy, then more often than not it won’t be.”

Another clean sheet for Walker, his seventh in just eleven away matches, has gone a long way to establishing a unique record for the side. Whites’ six goals conceded away from home in the league is a lower tally than any club in the top seven tiers of English football – 232 clubs in total – and the stopper is determined for this to continue: “It’s a fantastic record to have, and one we need to keep on trying to hold. Of course, if we don’t get promoted at the end of the season it will effectively count for nothing but it should fill us with confidence.

“I think we should feel lucky to have such a strong defensive unit at the club. I always have confidence in those playing ahead of me in defence, and in our options on the bench too. There has been a bit of shuffling around in the side at times, but whatever back four or five we put out are more than capable of keeping a clean sheet.

“Now, we need to turn our home form around and if we can do that then we will finish in the playoffs. Our home form has baffled everyone, and truthfully we’ve been lucky that our away form has been so good. If it had only been average, we’d be a lot further down the table. We haven’t been anywhere near as consistent at home as we should have been, but that can still change.

“Realistically, we probably won’t finish in the top two but there are playoff spots to battle for and we need to be in them come the end of the season.”

Whites have a busy schedule in February, with eight league games due to be played. Despite this gruelling run of games, Walker is adamant that he would much rather be playing matches than not: “All of the side would prefer to have two or three games a week than be training. I like our training sessions but you always look forward to playing games, and I think we’re a fit enough side to cope with it.

“We are fortunate enough to have strong players on the bench in every match, too. I’m sure that everyone at the club will have a big part to play over the next few months. Our substitute bench on Saturday was great – I can’t think of any other sides in the league who can call on players as strong as the five we had on there.”

The club’s involvement in the FA Trophy came to an end ten days ago with a 3-2 defeat away at Eastleigh, despite being in a winning position with just ten minutes to go. Walker says: “It was a tough defeat to take, especially considering we were leading with not much time left. The Trophy run, as well as what we did in the FA Cup, was fantastic though and if you had offered me the last 16 of the Trophy and the second round of the Cup at the start of the season then I would have definitely taken that.

“I believe it’s been the club’s most successful campaign in the two competitions in the same season for quite a few years, and to play a part in that was great. We still have the Kent Senior Cup to go for, but the main focus now is definitely the league.”

Firepower was added to the squad last week in the shape of Jeff Goulding, who arrived after his release from Chelmsford City, and the striker netted a debut hat-trick to get his Dover career off to a fantastic start: “Jeff definitely adds a fresh attacking option for the side. Every attacking player at the club has their own abilities which they excel in, but Jeff gives us something different.

“He’s a very mobile guy and links up well with other players, so it’s now a job for the gaffer who find out who works best with who. If we can figure that out, then we will climb up the table very quickly.”

Walker was involved in an altercation with club captain Craig Stone during the victory at Dorchester, but is keen to point out that the reasons for this: “Yes, there were a few words said between us at the time – but 30 seconds later, it was all fine and forgotten about.

“Maybe I said things I shouldn’t have, but it all comes from my desire to win. If I feel that someone in the side isn’t doing what I would expect, I will tell them – and, if I’m doing something wrong I expect someone to tell me. Stoney and I are absolutely fine now and, as I say, it is just our passion to do well for the club coming through.”

Whites travel to Boreham Wood on Saturday and Walker is expecting a tough match: “We went there last season and drew 1-1 in what was a very close game. They’re not as high as they would’ve liked, but they’ve got quality in their side. They have signed a couple of guys on loan from Arsenal, who are obviously talented players, so we’ll need to be at our best once more.”

The trip to Hertfordshire kicks off a run of matches which is followed by clashes with Chelmsford City, Eastleigh, Weston-super-Mare and Maidenhead. Walker says: “We’ll go into every game looking for three points, and our aim is to not lose another game this season. There will be a few draws along the way but, starting with Saturday, maximum points are what we have to go for.

“A week is a long time in football and if you lose a game then it’s easy to dwell on that, and negativity can set in. We’ve not really experienced that, though – when we’ve lost games, we’ve stayed positive and tried to sort it out in the next match. At the end of February we could be comfortably in third place and be looking forward to the final two months of the season.”