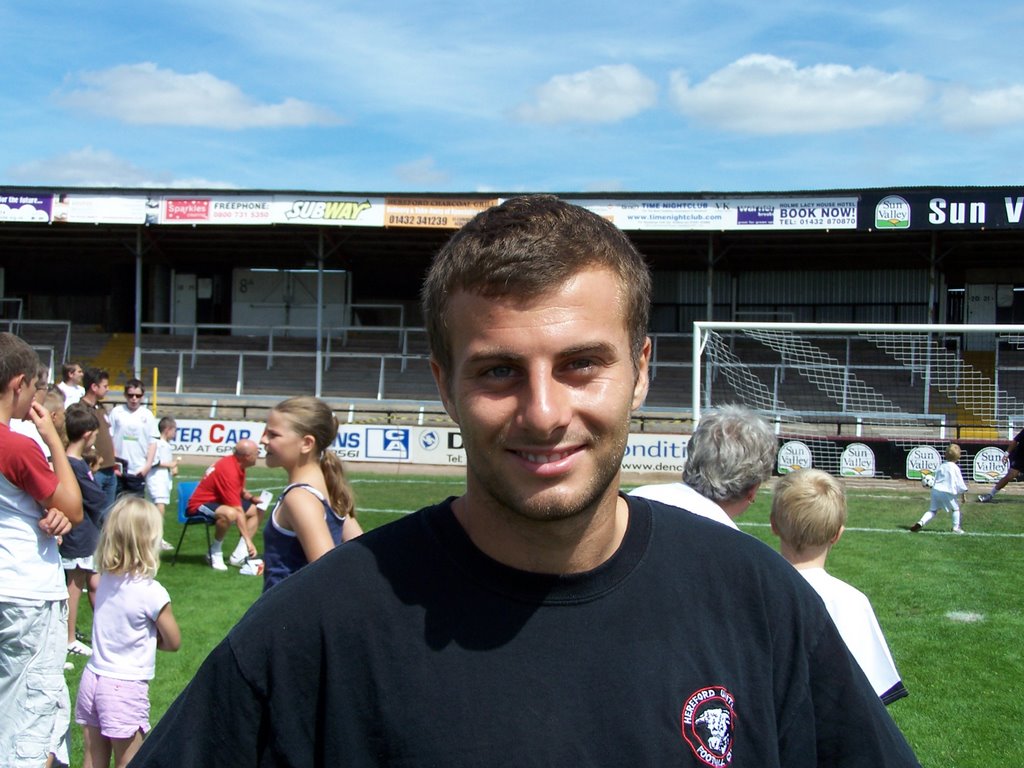 *BS*JON WALLIS says it was his debt of gratitude to boss Clive Walker that persuaded him to re-sign for Dover Athletic.

*BF*Jon, who put pen to paper on a deal that keeps him at Crabble until the end of the season, enjoyed a highly-successful loan spell at the club earlier in the season.

And when League Two club Hereford decided to release him this week, he only had one club in his mind that he wanted to join – Dover Athletic.

Jon said: “I had a wonderful loan spell here earlier in the season and really enjoyed myself. The club made a big impression on me and I’m delighted to be back at Crabble.

“There are a lot of great lads at Dover and I want to help them get out of this division. That is my main focus now.”

The skilful and versatile player, who can slot in defence or midfield, returned to Hereford in January – but it soon became clear that he was not going to figure in Graham Turner’s first-team plans at Edgar Street.

But Jon had a month on-loan at Conference National champions-elect Dagenham – and made four appearances, coming off the bench each time as a late substitute.

He said: “Dagenham manager John Still wanted me to extend my loan until the end of the season – but the two clubs could not agree the terms of the deal, so it fell through before the transfer deadline.

“That meant, because I was not in the manager’s plans, Hereford had to pay up my contract and release me.”

Due to the transfer deadline passing, Jon can now only play for a club below Conference level. And Jon admits there was a long queue of clubs lining up to sign him once the Bulls let him go.

He said: “My phone was red-hot with managers offering me first-team football at their clubs, all a level or two higher than Dover.

“But after enjoying such a great time at Crabble earlier in the season, Dover was my priority so I rang Clive to see if he was interested in taking me back.

“Clive gave me an opportunity to get games under my belt when I needed them and I owe him a debt of gratitude for that.

“And I was absolutely delighted that he wanted me to return – and we agreed terms quickly and now I can’t wait to get out on the field.”

Jon – who played 16 matches for League One club Gillingham last season before moving to the West Country – insists he has no axe to grind with Bulls chief Turner, insisting: “The whole experience has made me a stronger person.”

He said: “The boss there even admitted he had not given me a fair chance. But these things happen in football and I’ve had to learn to take it on the chin. It’s been a learning curve.

*Ppic1*”I just want to play football. I got a lot of first-team football when I was at Dover and, after a frustrating period on the sidelines at Hereford, was able to rediscover my fitness and form.”

Jon has not ruled out staying at Dover beyond the summer – although he is keeping his options open at this stage.

He said: “Clive has promised he will not stand in my way if a club at a higher level comes in for me – and, when I say that, I mean Conference or above.

“It goes without saying that I want to play in the Football League or Conference – and I will be listening to what other people say in the summer.

“However, if I am getting loads of games at Dover, part of a successful team and enjoying myself here, it’ll take an amazing opportunity elsewhere to prise me away. I may decide I want to stay here.

“But I’ve not looked that far ahead to be honest. I just want to concentrate on getting out on the field and helping Dover to promotion, starting with three points against Chatham on Saturday.

“This club should not be down at this level because the set-up is superb. It’s a big club and with good people in charge.”

Chairman Jim Parmenter said: “We’re delighted to have Jon back on board.

“The club have never been out of contact with him since he went back to Hereford. We’ve been closely monitoring his situation and always kept the door open for him. Now he’s back and we hope this gives us a further boost as we bid for promotion.”