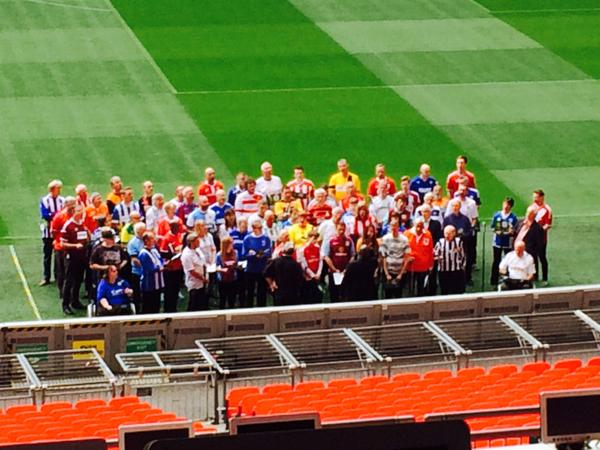 *BS*Club photographer Simon Harris was recently selected to appear in the Fans Choir at last weekend’s FA Cup final. Here, he writes exclusively for doverathletic.com on what was a very memorable day for him and a proud moment for the club..*BF*

I really can’t remember how it started. Thinking back, it might have been turning the TV on early for the BBC news and catching the end of ‘Songs of Praise’. It might have been something on the BBC Sport website.

Whatever it was, there was this invitation for the chance for one fan representing each of the 64 clubs that reached the 3rd Round of the FA Cup to be on the pitch at Wembley on FA Cup Final day, singing Abide With Me.. and it specifically said that you didn’t need to be able to sing!!!

It’s probably as well to point out really early on that my singing ability is nil.. or possibly less. I remember being around a dining table with a group of friends late one night (maybe early one morning?) all singing along to some classic songs, when our host stopped singing. “Why have you stopped?” was asked. The answer was “I never realised that anyone could sing as flat as Simon does”. Just so we’re clear.

Anyway, the process was simple enough. On the Songs Of Praise website, there was an application form to be filled in before early March. Usual sort of details stuff and then write a story in up to 300 words saying what the FA Cup means to you. Well, we all know what the Great British media is like: If you’ve got a human interest story, you’re in with a shout of winning Britain’s Got Talent or The X Factor. Surely I’ve got to be in with a chance of getting selected.

I only applied in hope, really, and then forgot about it. Any football fan dreams of walking out on to the Wembley pitch on Cup Final day, and Abide With Me is part of the tradition that makes English football the best in the world.

So, a few weeks later, sometime during March, I’m sitting at my desk at work when my mobile phone rings. It’s a lady from the BBC. “You’ve been put on the shortlist, can we check a few details, please?” Various questions, most of which had been answered on the application. Then, “Do you have any disabilities?”, “Yes, I can’t sing”. She just laughed and said that it didn’t matter – well, they can’t say I didn’t give them a chance. She finished by saying that if I hadn’t heard by the beginning of April, then I hadn’t been selected. Well, at least I made the shortlist, eh?

March 30th. Another phone call. I’ve been selected. We’ll email you more details. Congratulations. Over the moon and plenty of other clichés! Excited, amazed. Just can’t believe it.

A couple of weeks before the day more details. Need to be at Wembley on the Friday afternoon. They’ll put us all up in a hotel on Friday night, and again on Saturday night if we want. We’ll be rehearsing Friday afternoon and Saturday morning. We’ll each get a ticket for the game, but no, there aren’t any spares.
*Lpic1*
Friday 29th May. 2pm. Wembley Stadium. 64 football fans are waiting outside the staff entrance. Quick ‘briefing’ saying what was about to happen outside, then taken inside to check through security. Leave your overnight bag in one of the Wembley dressing rooms – not one of the main ones, just one of the minor ones dotted around the complex and then into the Press Media Room that we’ll be using for the next 24 hours or so.

We’ve all been allocated seats basically in exactly the same format as we’ll be lining up as a choir. A few more details from the people from the BBC and the guy running it from Wembley’s point of view. A special mention for Jim representing Newcastle, who celebrated his 100th birthday recently. Everything happening at Wembley tomorrow has got specific timing set to it, so we need to make sure that we all keep to what we’re told, but above all, enjoy yourselves.

Then it’s the conductor, Steve Thompson, to take us through a first rehearsal still inside the room. Start with some breathing exercises, then just la-la-la through the song. Then “Who knows the words?” Well, some of them – I’d tried, but the saying ‘you can’t teach on old dog new tricks’ comes to mind. I’d got the first verse, some of the second verse, but not necessarily in the right order. I wasn’t the only one.

Out on to the pitch for a rehearsal. Wembley is spookily quiet when it’s virtually empty. Well, I say on to the pitch, but actually, we have to stay by the side of the pitch on the astroturf, because no-one is allowed to set foot on the pitch unless absolutely necessary, but we’re all lined up in our specific order.

We’re thinking the order may have been decided by how far your club reached in the Cup, so representing Dover Athletic (3rd round losers at home by 4-0) I’m between Harry from Brentford (lost 2-0 at home) and Paul from Rotherham (lost 5-1 at home).

It occurs to me that the vast majority of these clubs actually didn’t need to do anything to get this opportunity as they got to the 3rd round automatically. The Mighty Whites had to win through three ties to give me this chance.

Back to the room again – guess someone else is using the outside. More rehearsing – I’m getting more used to the words – and finally for today we get a motivational speaker come in to tell us how we should try not to be nervous and channel the feelings more to enjoying the occasion and trying to take it all in. Then we’re told that the plan is that the England Manager, Roy Hodgson, will be coming to see us tomorrow and we’re given fish and chips before getting on the coach back to the hotel.

I don’t know what it is about football supporters, but it was quite amazing just how soon after being dropped off and collecting our keys that people were appearing in the bar! I know this because I was one of the first. Of course, we’re all going to be very sensible, aren’t we, because we’ve got an important day tomorrow and the coach is leaving at 8 am. Yeah, right! I suddenly realised it’s half past midnight, and I need some sleep. I think I left most of them still there.

Saturday morning and a full buffet breakfast before getting on the bus. Someone’s overslept, so has to be chased up, but we’re still on our way in time to get to Wembley shortly before 9. Aled Jones is there, saying hello to us all, and then we’ve got to get out onto pitchside, as BBC Breakfast wants to include a rehearsal in their programme. Mike Bushell is rushing a bit as he points out the Sunderland supporter – trouble is, he was guessing by the SUFC badge on their red and white striped shirt. Rachel from Sheffield United isn’t terribly impressed.

Back to the room again. Alfie Boe has arrived and is signing things, chatting to people and having his photo taken with them, until one of the BBC producers decides that he needs to be somewhere else. He has a quick photo done with all of us, before he goes. More rehearsals in the room, then back onto pitchside to rehearse some more. Armies of groundsmen are mowing the grass, so it’s not easy to hear things above the sound of their mowers, going back and forth, over and over again.

Lasagne for lunch. Everyone’s getting a bit more excited now as we count down the hours. Only another 5 hours and our two minutes of fame will be over. Then it’s pitchside again to rehearse with Alfie Boe and the band of The Brigade of Gurkhas. To be honest, we’d started thinking we were sounding pretty good, beginning to believe that we doing alright. Then we heard Alfie join in. Ah, so that’s how it’s supposed to be done.

Back in the room and we’re told that we need to make sure that we get off the pitch quickly after singing, but it’s absolutely fine to wave to the crowd, as they’ll be cheering us off. Yeah, course they will!!??

We’re told that Roy Hodgson will be coming in to speak to us in a few minutes. Fifteen minutes later, lots of apologies, but Roy’s got held up and he’s not going to make it. But then suddenly he’s on his way after all and he arrives. Aled asks him how he would motivate a team about to go out and perform at Wembley. Again, it’s really just try to enjoy the occasion and take it all in.

Time’s getting on. It’s past 4pm and there’s only about an hour to go before we’re on. There’s a pack of food for us all, with a sandwich, drink and stuff. Think I’ll save mine for afterwards.
*Lpic2*
Out into the corridor to line up again. The team mascots are all out there, too, and we’re high-fiving them as we go past. Wait in the corridor. Then wait in the North-West tunnel. Then we’re moving out into the Wembley sunshine.

You’ve heard talk of the deafening roar of Wembley. You just cannot believe what it’s like. I don’t have the words to describe the experience, but be assured that it’s like nothing else.

Just before we start, both sets of supporters are singing their hearts out in support of their own teams, but as soon as Abide With Me is announced, and the music starts up, everyone in the ground is singing the same song. We do the song, and I think I’ve got the words pretty well nailed at last. Probably helps that they’re being shown on the boards running round the stadium, so that 89,283 backing singers can join in with us.

Then it’s all over and we’re leaving the pitch. The guys from the BBC knew what they were talking about, as everyone in the crowd is waving and pointing and cheering us off.

Then we’re back in the North-West tunnel and the adrenaline is racing. We’re all hugging and smiling and laughing. We’re all congratulating each other and are all on a fantastic natural high. Back to the room to pick up our stuff. We need to get everything cleared out of there, as it will be needed after the game for the media interviews. Then we’re given our tickets and a programme and taken to our seats. Somehow, I’m in my seat watching the game only 4 minutes after kick-off. At half-time, I’m talking to Paul from Rotherham and he reckons he’s only just coming down from the experience.

I’m on the train back to Sevenoaks after the game, and sitting opposite me are a family bedecked in their Arsenal gear. It turns out that the boy was one of the mascots – he was with Mesut Ozil – and he was one of the ones we high-fived in the Wembley corridor. Small world isn’t it?

Okay, the game was a bit of an anti-climax, but I’d have to say that the 2015 FA Cup Final at Wembley is going to stay with me until my dying day. Just think, if it wasn’t for the fantastic efforts and achievements of those amazing Boys in White, together with the management and staff of our wonderful little club, I wouldn’t have had that experience.

I can never thank anybody enough.