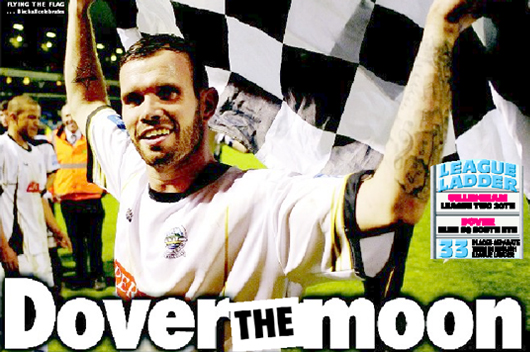 *BS*WHEN was the last time Dover Athletic had two page leads in The Sun within two days of each other? Never!

Yet the club’s famous win got a cracking page lead in today’s Super Goals pullout – with the headline: “Dover the Moon” and picture of a jubilant Adam Birchall holding a black and white club banner as he celebrated with fans.

And he was stinging in his criticism of Gillingham assistant Ian Hendon for chucking him on football’s scrapheap last year.

He said: “I needed encouragement and games – but I didn’t get that with Ian.”

Meanwhile, The Time’s Game pullout featured Dover as a page lead where Gary Polland wrote: “The game had all finest Cup ingredients, including a wonder goal to rival Ronnie Radford’s effort for Hereford against Newcastle in 1972.”

The Mail ignored us – but the News of the World and Mail on Sunday both gave the club page leads yesterday.

Hess is in a Mess, screamed the headline in the News of the World, while the Mail on Sunday reported that Gillingham had been beaten by “their neighbours from hell”.

BBC South East are running a feature on Dover in tonight’s news programme.

*BS*ABOVE image is courtesy of The Sun newspaper.