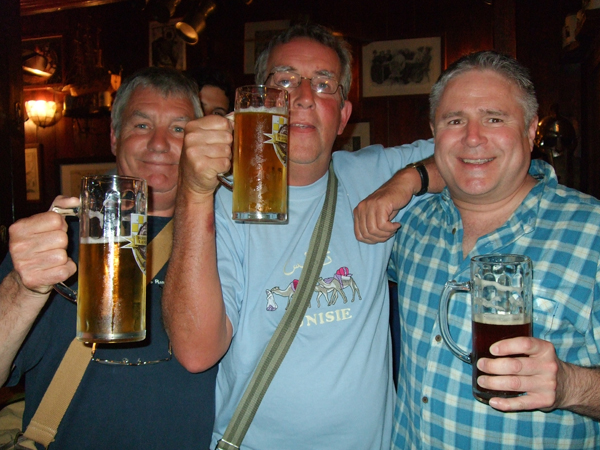 *BS*Though purloined from a classic Only Fools and Horses Christmas special, I like to think of myself as the chap who brought the term ‘Jolly Boys’ into popular Dovorian usage.*BF*

I’ll stand to be corrected on that point, but what is certain is that the Jolly Boys outing in the cause of the Mighty DAFC is now entrenched in popular culture. And whilst I appreciate that ‘culture’ isn’t necessarily the word I’m looking for when pondering displays of acute yet harmless oafishness, I’d ask you to allow a little poetic licence as I consider how I’m getting down to Sussex on Saturday.

There are three options – all fun…

To start the season, I opted for the Supporters’ coach for the trip to Woking. It’s cheap, comfortable and has the inestimable benefit of going exactly where the driver points it. No chance of getting lost, in other words, a point I’ll get to later. And for those who enjoy a little people watching as a means to passing the time, this is the outing for you.

Though sharing a common cause, we aficionados of all things white and beautiful are a diverse and eclectic bunch. Nowhere is this fact made more apparent than on an away trip where the mid-point of the bus – where the toilet is situated – acts as a kind of 38th parallel that divides the downright silly from the moderately sensible. And as a fully paid up member of the people watching fraternity, I never cease to be entertained by the fluctuation in the mental age of most of the punters on board.

Take Leigh Champion for example. (No really, I insist!) For those who only see Champ on match days, I can appreciate why they might pigeon hole him into the category; “loonies I have lunched with.” But this would be to do a disservice to a stout yeoman who is serious-minded, hard-working and temperate from Monday to Friday, as he holds down a responsible job. That said, victory on the road on a Saturday triggers off a chemical imbalance which ensures our man can only converse in football chants until he wakes up the following morning. Freud would have had a field day.

Naturally, ladies travelling to away games by bus is an innovation that is to be encouraged. And it can only be a matter of time before the gutter press refer to Cheryl Cole as a poor man’s Donna Riccaboni; particularly if Britain’s favourite Geordie should ever find herself kissing concrete in Faversham having necked enough Sambuca to floor a rhinoceros.
*Lpic1*
For the purist, an away day on the train should start with a full English served by the fair hand of the implausibly beautiful Polish waitress in Jermaine’s; a lass who attracts a bigger crowd than Folkestone Invicta on her day. Essentially, this is an outing for a hearty trencherman who will ne’er baulk at the size of the consignment of red meat and fermented vegetable drinks that will be placed in front of him during the course of the next 15 hours. Increasingly, this is Last of the Summer Wine meets Phoenix Nights led by a likely lad in the form of one PKT Smith; a fellow who would be a multi-millionaire in the travel industry if there were any justice in this dirty, disgusting world.

For those who haven’t had the pleasure, simply arrive at Dover Priory in good time for the 9.44 and place yourself squarely in the hands of this outstandingly capable chap. I shall simply add that if there is only one good pub within a 20-mile radius of our destination, Smith Minor will sniff it out like a Doberman sensing fear. Staying briefly with a canine theme, you will, on departure, be given clear and simple instructions that could be readily understood by even the most feckless of Springer Spaniels. That’s fine as far as London, when we reach the stage that could readily be compared with tipping over a bucket of mice and hoping they all scurry off in the same direction. In short, some will go MIA and I will invariably get the blame.

On one such occasion, a furious mother once came within an ace of writing to the Dover Express to complain that I’d abandoned her little lad at Waterloo station. A fair and reasonable complaint, truth be told, and one I’d have taken squarely on the chin had the boy in question not been 48-years-old. Later that season, the same fellow’s wife sent me a text asking if I’d seen her husband since I took him to Margate on Saturday. The text came on a Tuesday evening. A few clandestine phone calls revealed that she was joking, the little blighter. How I laughed until I stopped.

Last and by no means least, is the car journey with the revered Archie at the wheel; a must for those who enjoy a little passive smoking without having to buy 40 fags of their own. Equally as entertaining as options 1&2, I have often thought of our regular line-up of Archie, Jethro, Blue Rinse Tony and myself as a classic quartet with the potential to be the world’s oldest and ugliest boy band.
There was a time when Archie might well have fitted snugly into the category of angry young (ish) man.

Yet since becoming a Septuagenarian he’s calmed down considerably. Indeed, when he’s truly at peace with the world there are times when he can get as far as Whitfield roundabout/Capel before his first bout of road rage. This can be particularly entertaining, especially for those who hold the view that real men don’t read maps. Memorably, our hero once followed to the letter instructions telling us how to get to an away game with Wealdstone, completely losing the plot when he went round the same roundabout for the 14th time. With time to kill, we were enjoying the spectacle so much it was quite some time before we let on that we were actually playing Windsor & Eton.
*Lpic2*
I’d have to say that my favourite bit of an away trip with Archie are the monologues; for the uninitiated a bit like the finest works of Alan Bennett but with considerably more use of the word ****. There are a few old classics to pick from with my particular favourites being “Why Elvis is only popular on council estates” and “Margaret Thatcher – her part in my downfall.” However, if you tire of the old classics, it’s no trouble to instigate a new one of your own. Simply say something like, “They shouldn’t give old people heating allowance, the buggers are never in!” and an hour-and-a-half’s comedy gold is all but guaranteed.

All in all, I can’t help but think that I’m going to have a grand day out, whichever travel option I choose to get to Sussex. Last time round, the people of Lewes and its football club proved to be convivial hosts.

If they could do the decent thing and refrain from battering us 6-2 this time, I’ll enjoy it even more!