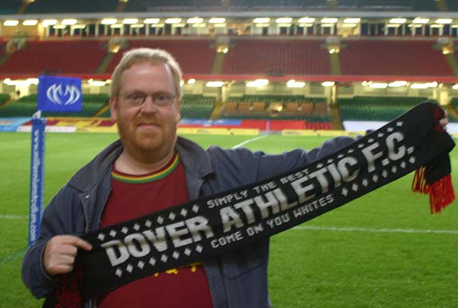 *BS*AS A general rule of thumb, I try not to write too many nice things about people.

*BF*If I do, it generally means that they’re either moving away from the area or have simply handed in their dinner pail to the big fella upstairs. So given that I’d like Simon Harris to stick around and stay very much alive, an achievement in itself given the fellow’s driving ‘skills,’ I think it best if I simply take the Michael, just to be on the safe side.

Rather than just being a football fanatic – I employ the term in its most expansive sense – Simon is many things to many people; friend, husband, father, financier and a good bloke to have around when stuff needs organising. Few, I will happily wager, ever speak of Simon Harris, International Man of Mystery. Please allow me to break that particular mould.

If I were fortunate enough to be married to someone as divine as Mrs Harris, I’m sure I would spend much more time at home. However, surely the world’s most tolerant football wife allows her man to travel to some pretty far flung places for the often thankless task of watching England. When the ‘club v country’ debate crops up, the Mighty Whites invariably come out on top. However, there have been times when it has proved possible to watch both in unusual circumstances, given a little planning and an even break.

A couple of years back, Whites had very inconsiderately drawn 0-0 with AFC Wimbledon in an FA Cup tie, necessitating a Tuesday night replay at Kingsmeadow; just 22 hours prior to an England World Cup game in Belarus. Naturally, our hero had a plan up his sleeve. He reasoned that if Whites’ game was decided in 90 minutes, he’d have just enough time to get to Heathrow and grovel his way past check-in and onto his flight with a couple of minutes to spare.

So it proved, as Whites did the decent thing and lost 2-0 in normal time. And it was whilst stepping over the tumble weeds in an otherwise deserted main drag in central Minsk that the square mile’s finest heard the unforgettable words:

“Allo mate! How’d Dover get on in the FA Cup last night?”

Earlier that same year, Harris Major had led a platoon of Dover’s stupid yet savourable to Sweden for the occasion of the European U21 championships. After watching England beat Spain in Gothenburg, we pootled south the following day to take in Sweden v Italy in Helsingborg. On arrival, we naturally sought a veritable smorgasbord of art, architecture and cultural enlightenment as a means to passing the four hours prior to kick. As luck would have it, nothing much was going on in that respect so we put on some plastic Viking helmets and got drunk with the locals in an Irish bar.

Accordingly, it was in state of advanced wibbly-wobbliness that, whilst en route to the game, we chanced upon a vision of loveliness.

I’d say that the lass in question was in her early 20s, raven-haired and with a figure to die for. She wore a green spangly dress, that stopped several feet above her shapely knees. She carried a large bouquet of white carnations and was striding purposefully towards the steps that led to a cathedral where a wedding party had gathered outside. She did not have the words “I’m a bridesmaid” tattooed on her forehead, but she may as well have done.

I am not proud to state that most of our party were salivating in an almost canine manner that must have looked terribly unattractive.. The boy Harris’s reaction was somewhat different, however. As he gave the lady what barely counted as a sideways glance he sniffed, almost irritably, and memorably opined:

*Lpic1*“Hmmmppphhh! A bit over-dressed for the game, I’d have thought!”

It is in this heart-warming if slightly tragic tale that we discover the essence of the man, I feel. Once young Harris goes into full footy mode it really doesn’t dawn on him, such is his temporary mental age of 14, that anyone could possibly consider going to anywhere other than the match.

Closer to home, Simon’s unbelievable loyalty to the cause is even more remarkable when one considers he works in London and lives in Sevenoaks. Assuming that half those 1,000 games were played at Crabble, a quick calculation tells me that our man has driven 59,500 miles to get to the pleasuredome. Naturally, his motoring costs have run into several thousand pounds and are even more prohibitive when one adds the cost of petrol to all his speeding fines.

Supporting Dover is a lot easier these days than has been the case, of course. And I guess that I will always remember Simon’s truly selfless contributions to the cause during the dark days around the turn of the century. Naturally, we all had our own opinions as to how the club could get out of the financial mire it found itself in. None of those ideas were based on reality, pragmatism or were even remotely sensible. And it was Simon who took on the roll of herding the Crabble cats into a surprisingly coherent (well, usually) unit of a Supporters Trust that may not have saved the life of the club, but did sustain it on life support for the better of three years.

In those days, none of us happily dragged ourselves to the old Centre Spot on a freezing November night. It was dispiriting to talk of nothing other than one cash crisis after another; working out how we’d find a sticking plaster for the latest flesh wound. I suspect we found the energy and inspiration to drag ourselves a few yards up the road, as Simon would be undertaking a 120-mile round trip for the same soul-destroying yet ultimately worthwhile endeavour.

But for Simon – not to mention the unwavering support of his family –I’ve no doubt whatsoever that our club would be history and our much-beloved stadium a deluxe housing estate.

Ours is a special club, of that I’ve never been in any doubt. That said, I’m reluctant to call Simon special, given that modern vernacular leads one to believe that what is really meant is stark, staring, howl-at-the-moon bonkers. Accordingly, my revered gift for tact and diplomacy prevents from telling you which member of Simon’s family spoke of his father as being in occasional need of professional medical men in white attire. When you’ve heard a parent say; “I don’t care if I’m nearly dead, take me to Tamworth!” it’s difficult not to sympathise.

It’s fitting, perhaps, that Simon’s 1,000 consecutive game is an FA Cup bun fight. Whatever else our hero has seen during the last 16 years, a solid gold, totally delirious and-we’re-hearing that-little-Dover-are-winning-at-Anfield-with-just-seconds-remaining style cup run has eluded him.

Having made a happy man very old, maybe that’s something the boys might like to sort out for him!

In the meantime, thanks Simon, from each and every one of us.

As that bone-headed clumper at Wealdstone once said; “It’s been emotional.”